Vegan MoFo: One More About Candle

We have returned from our 16 day Road Trip Extravaganza. I'll post more restaurant reviews in the weeks to come. It has been a let down, to say the least, to return to my refrigerator that is need of a grocery run. I feel like my face is in a scowl as I stare at its contents, wondering what to fix...thinking of the "good 'ol days" when I could just sit and choose from an array of vegan gourmet meals...then someone would serve it for me with a smile on his face.
And all I had to do was say, "Thank you!"
Those were the days. 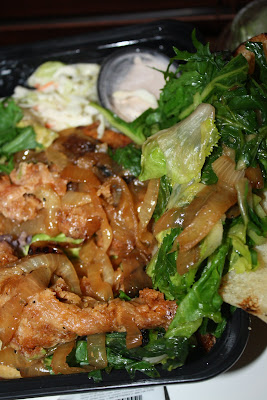 I wrote about our first night in NYC at Candle Cafe and our other trip to Candle 79, its sister restaurant. We made one other visit to Candle Cafe this trip.
There was an hour wait for a table, therefore we ordered our food to-go. I finally got my Cajun Seitan Sandwich that I was merely teased with, from one bite of my husband's the other night. I wrote last time that this is one of our favorite sandwiches ever. This is the inside view of "pan-seared seitan with steamed greens, onion, avocado, and ancho chili aioli, served on toasted foccacia."
This time the greens were a little bitter, so I picked them off and ate them first so they wouldn't distract from the otherwise perfect taste in my mouth. 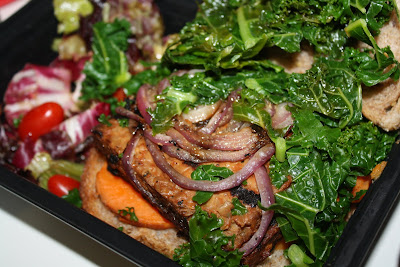 Ryan chose the Barbecue Tempeh & Sweet Potato Sandwich (with wilted kale, onion, and shallot sage aioli), and it was definitely another hit! 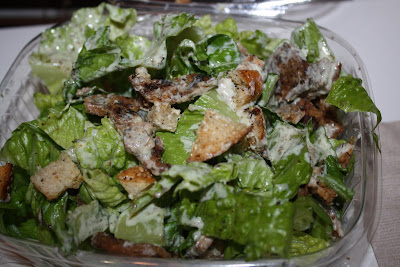 We also shared the Classic Caesar Salad. I really love caesar salads. I like to order them because they always vary from restaurant to restaurant.
**********************
A week or so before our trip, I had made Aztec Salad (from the Candle Cafe Cookbook) for dinner. It really and truly, at that point (before I went on vacation, of course) was the tastiest, most wonderful food I'd eaten in quite awhile. In fact, now that I'm thinking about it, I am making this again as soon as I get back from the grocery store. 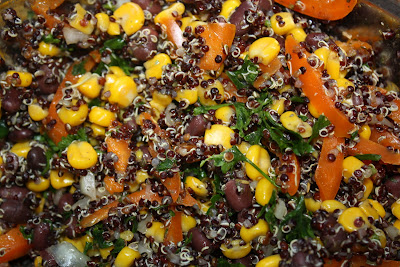 The only downside to this salad is the many steps involved. (The recipe is actually online at this site where the book can be purchased. Click on the Google Preview under the photo and there are many recipes included from the book.)
One layer of the salad is this Quinoa Salad, which is tasty enough to eat by itself. I used red quinoa, organic frozen corn, onion, cilantro, bell pepper, black beans, lime, and a tiny bit of vinaigrette (store-bought, not the recipe version, for sake of time). 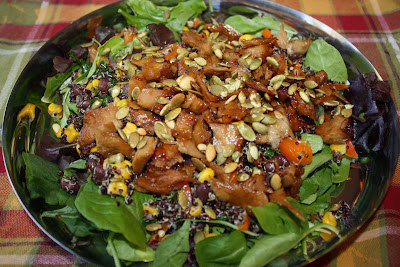 I also used seitan instead of tempeh because that's what I had. The marinade (which consists of apple juice, tamari, garlic, agave, and chipotle barbecue sauce - I did NOT use as much agave as it called for) is phenomenal. 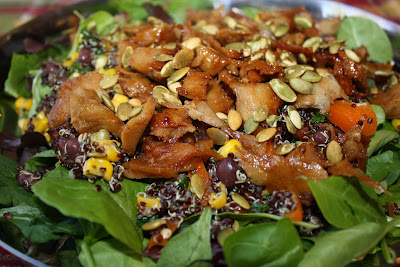 Another fun, tasty aspect of the salad is the toasted pumpkin seeds on top. This is another step I cut out; rather than toasting them myself, I bought some tamari roasted seeds in bulk at WF.
The seitan and quinoa salad layers were bursting with so much flavor I didn't feel any need to add more dressing on top.
************************************
I'll pick a winner for the Candle Cafe Cookbook tonight!
Last chance to enter HERE.
Posted by Jenny at 8:32 AM