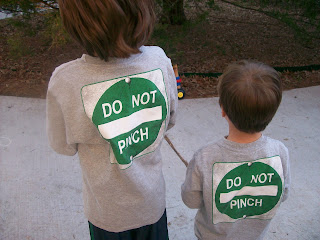 We especially like to celebrate St. Patrick's Day because both of the boys have Irish names. We didn't do that on purpose. Apparently, that is just what we are attracted to. I actually thought Sissy's real name was Irish, too, but I guess it is English. I think it sounds Irish, though, which is close enough. Speaking of names, yes, it is getting old using their pseudo names, and I'm sure I'll crack one of these days and start using their real names. 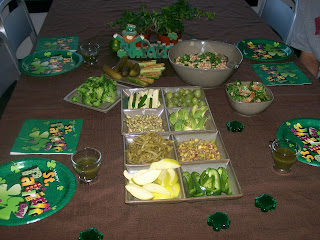 Green food for our night meal...steamed broccoli, pickles, celery with peanut butter, navy beans with parsley, spinach/lettuce salad, zucchini strips, grapes, roasted edamame, avocado, green beans, pistachios, apple slices, and bell pepper...oh, poo, I just realized I forgot to set out the kiwi last night. We even had green juice - Boathouse Farms Green Goodness fruit smoothie drink, which includes things like spirulina, spinach, and blue green algae. I had green apple juice boxes on hand in case the green drink didn't go over well (as I suspected it would not), but they all loved it and enjoyed several refills. 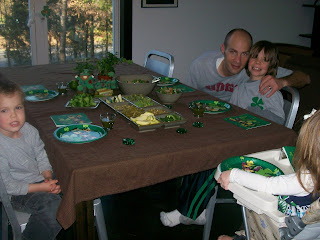 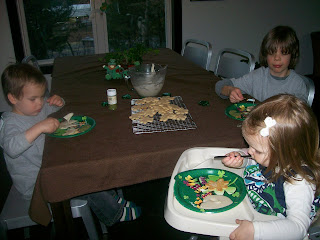 We decorated shamrock cookies after supper...Papaw and Googie came over last night, and we gave him a plate of cookies we had decorated. He ate all three of them. That's one of the great things about Papaw...he'll try and appreciate whatever we make for him. Googie, on the other hand...well, she's always mysteriously "full" when vegan food appears. ;) 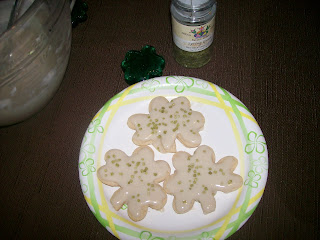 Diary of a First Time Marathoner

Yesterday, my friend Angie and I took part in the Little Rock Marathon. It was my first endeavor into such an event, and even though I have been steadily working out the past year and really stepping it up the past five months or so, I did not know what to expect. I relied on Angie's expertise on the subject to get me through. It was nice to have Angie and her husband drive down from Missouri for the night. I was not feeling very celebratory when the alarm clock hit 6:00, and I knew I had to get up. Why are so many events in life planned this early? Who decides these things?! 8:00 a.m.?! I'm ideally not even awake at that time. I made it in time, though, to meet Ang near the starting line at 7:45. However, in the flurry to get there, I had forgotten my Clif Blocks, my plan for sustenance during the race, in the car. What a bummer. 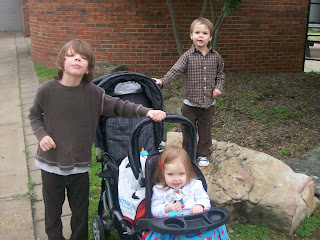 3/4 of my cheering section

It was kind of nice to run along some streets in Little Rock I wasn't familiar with. That was one little way to pass the time. The two Jolly Ranchers I ate were also effective in passing a good 15 minutes. It has been a really long time since I've eaten a Jolly Rancher (we're talking over a decade), and, boy, were they good! I only ate them because candies were the only things, other than drinks, that were available during the race. I was so excited when I saw the upcoming Orange Slices sign, then dismayed when I realized they were all gone. I sucked it up and consumed the sugar, corn syrup, and artificial flavors and colors. :) I didn't want to have one of my weird low blood sugar?/hyperthyroid?/dehydration? mystery spells during the run. I'm quite certain those two Jolly Ranchers saved me, ha.

I know it sounds trite and cliche, but when you are running like this - or doing anything physical, you really do feel powerful and inspired. It cleared my head, and it made me feel hopeful for things to come in my life. In addition, the feeling of community and the human spirit was crazy, as in "cool" crazy. When I first heard someone yelling, "Go Jenny!" I turned around, wondering who it was. I had forgotten my name was on my race bib. Throughout the race you have complete strangers clapping, pumping their arms in the air, and yelling, "Come on, Jenny! You can do it!" It makes me have tears in my eyes just thinking about it.

At the finish line where there are SO many people crowded to cheer in the arrivals, there is such applause and uproar -even for little old me, coming in toward the back of the pack. It really does put a smile on your face and make you want to keep running. It made me want to do better in every area of my life...weird how it does that. I am just very much in favor of doing anything that stretches you or makes you walk out of your comfort zone a little bit. Again, I'm getting a little cheesy here, but those are the things that make you really feel alive. 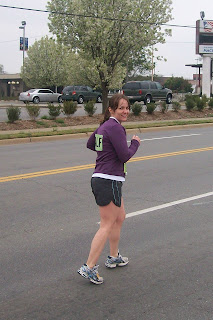 Somehow Angie and I got separated during the race, and we were never able to find each other again. She had to make a quick stop, and I assumed when I had to make a quick stop, we'd meet back up. Unfortunately, she finished only a couple of minutes behind me. I say "unfortunately" because if I had only waited another minute, I might have spied the pink shirt I kept looking for. We were keeping the same pace; it wasn't that I was going any faster - it was just that initial stop. I had many more elopement/Lafe questions for her, too. :) At one point, I just stopped on the curb and waited a second, thinking I would just wait for her because it wasn't as fun without her. However, my leg muscles immediately started locking up, and I realized if I stopped, I was in trouble.
Another thing about my leg muscles is I realized how SLOWLY I walk. I felt pretty good as long as I kept jogging, but they hurt a lot worse when I walked. I had to walk up parts of the inclines, though. (Capital, yikes) There would be all these tall, long-legged people (even older people) passing me when I was walking, though. And I would truly be walking as fast as my legs would go. I guess it's because my legs are so short? I always felt like I have enough fortitude inside me to make me do whatever it is I need to do. That's true for the most part...I just was not counting on that amount of leg pain. I felt like my breathing/endurance wasn't the problem...in fact, by about mile 6 or 7, I was thinking, "I am in such great shape! I can do these all the time!" ha, ha.
Mile marker 11 to 12 was almost a complete hobble. However, I did take a deep breath and force myself to run the last half mile. My final time was 3:13:29. Not very impressive but not the worst either. 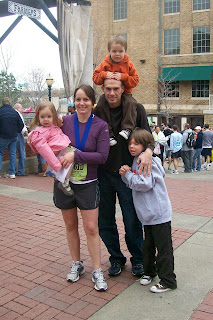 my family
As soon as I saw my family, I think the first words out of my mouth were, "Where are her pants?!" I am publicly apologizing to you, Ryan, if it seemed like I was criticizing you. Kate Gosselin I am not. The truth is, I just thought it was really funny - an innocent Dad mistake. Notice in the picture above I am covering her legs with my bag. To make it easier for him to get them ready on his own, I had left their clothes out the night before. I had told him, however, "Sissy's jeans are in the car." He doesn't remember me saying this, and he went by the instructions to dress them in the clothes that were set out. For her, that included a gray onesie with a white peasant shirt on top, white socks and shoes. He innocently said he didn't know there was something missing; he thought she looked cute in her "dress." Bless his heart. The only reason I would dare mention this story is because my rockin' husband not only encouraged me to participate in this marathon and gave me any time I needed to train (and even ran with me), he got the kids up, bathed and dressed them, then parked the car and located not just one but three different spots they could be standing on the road to cheer for me (all by 10:00, which is a feat I would not necessarily be able to accomplish). And not only that, he took them to the park later in the day so I could rest. Thank you, Ryan. I seriously don't deserve you. 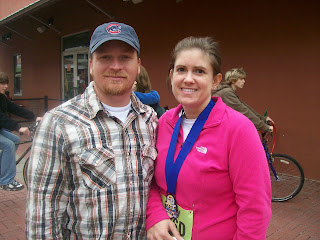 Angie and her newlywed husband, Lafe

By the time I got home, I was feeling very wobbly and starving. (I did have a post race banana and two little orange juice boxes that were waiting after the finish line.) I think I consumed 1,000 calories right off the bat by heating up an Amy's Enchilada Meal with tomatoes and avocado on top plus chips and a Sunshine Veggie Burger with two pieces of bread and lettuce plus chips. I felt sick but managed to eat almond butter/fruit spread on toast, a couple glasses of orange juice, and a soy milkshake for supper. Topped off by the small, leftover bowl of spaghetti with sauce in the fridge. That might not seem like that much food for the average person, but it's a whole lot of food for me. I sort of feel sick thinking about it.
I had to crawl up the stairs on my hands and knees because my legs were killing me. I hobbled around the rest of the night. I was convinced I was going to have to have knee surgery. They feel much better this morning, but when I started going down the stairs, sharp pains were shooting through one of my ankles. I'm still walking a little funny, but I think we'll be able to hold off on hip replacement for a bit longer.
Last night my mom commented that she couldn't believe I had ran 26 miles. I had to tell her I only did the Half, which is 13.1 miles. Suddenly, my accomplishment seemed to pale. At least she had spent the whole weekend thinking I was incredible, though. Would I do it again? Yeah, I think so. I'm probably having marathon amnesia, though - the same way you feel after delivering a baby, and during it, you think, "That's it. This is the last time. I can't go through this again," then you've barely left the hospital before you know you'd be able to do it again. :)
Posted by Jenny at 7:45 AM 3 comments: