New Blendtec and I Love Seaweed 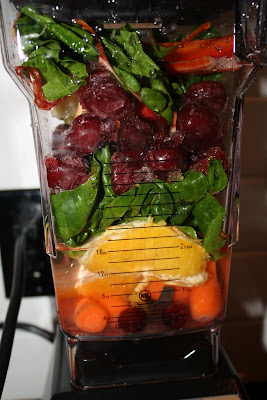 Here is my new blender. I have wanted one for a long time. I really wanted a Vitamix, but they are so expensive. We finally decided we really do need one. We have a nice, expensive Kitchen Aid mixer; it just makes more sense for our eating habits to spend more on a emulsifying whole foods blender. It was between the Vitamix, Blendtec, and HealthMaster. We went with the Blendtec, based on price and blog reviews. (2-Life.com seemed to be the best deal at the time; they offer specials and discounts, and, so far, they have had excellent customer service.)

The kids (and I) love that you can see through the (BPA-free) containers (and I got 2, which is so great). They also love the digital screen that counts down the time remaining and shuts off when it is finished. I ran into one of my friends at Whole Foods this week, and I was telling her about my blender. Dash whispered to me, "Tell her it turns off by itself." Here is our first smoothie we made - grapes, carrots, oranges, swiss chard, purple kale, apples, frozen cherries, and water.

Honestly, I had started getting a little nervous after I ordered it, wondering if it was a silly purchase and whether it would be any better than my other blender. But it's AMAZING how quickly and easily it grounds up everything. It came with a fat recipe book, too.

These drinks make me really full, which is great because then I don't want to eat anything else. I lost half of a pound this week. Which isn't amazing, but it made me happy. Now I'm just a pound away from another tens place - I'm 1_1 lbs. 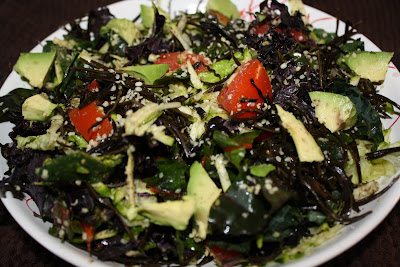 Lately I've also been loving...wait for it...seaweed. Sea vegetables are really good for you. (But I think it's important to try to stick with organic not only because of pesticides but heavy metals.) I think this one was Arame. It just has to be hydrated, and I thought it tasted great in my salad. 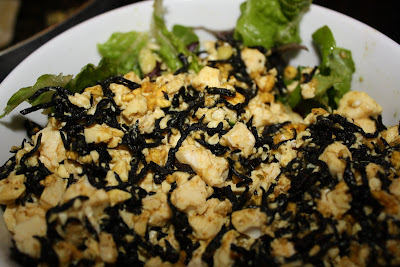 I put some in my tofu scrambler, which is on a bed of lettuce. I really liked it.
Posted by Jenny at 4:10 PM No comments:

This is what I saw last night... 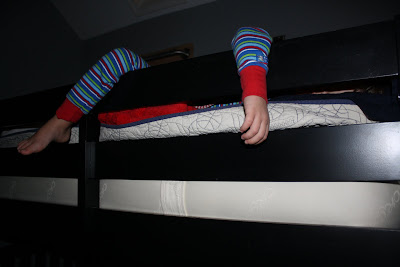 (Dash, sleeping on his top bunk)

And this is what I made last night... 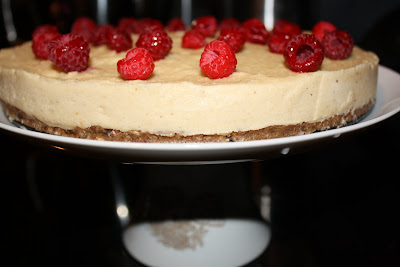 Continuing our journey to become more raw...It was the first raw "cheesecake" I have prepared. I used Kristen's Oh My! It's Vanilla Cheesecake recipe from her Desserts ebook. I liked it. The boys liked it, but Sissy said she didn't. (I'll let her try it again today; I think she was a little tired last night and full from split peas and salad. UPDATE: Sissy heartily ate a piece after school.) Tornado asked sweetly if he could go back downstairs after his bath and have another piece. Of course, I said yes. We encourage him, the little skinny fella, to eat anything with healthy fats (this has lots of nuts, coconut, and coconut oil) as much as possible.

Speaking of split peas and salad, the 2 little kids cleaned their plates last night. (Of course, Tornado did, too; that goes without saying.) We have gotten more serious about making Dash try foods that he doesn't want to eat. We've had to sort of spoon it into his mouth (leading us to believe the kid is just being lazy), after everyone is already finished, promising him dessert if he finishes. Some might not agree to this questionable practice, but last night he ate everything on his green-filled plate, without complaining. He was popping that lettuce into his mouth, without being prompted. He's getting used to the taste - if that is any consolation or encouragement to anyone with a picky kid like mine.
Back to dessert...It doesn't taste just like cheesecake - it's something altogether different but tasty in its own right (and much healthier so that's what counts). Having said that, there was an ingredient she recommends to use instead of water (Rejuvelac, made from sprouted wheat berries, and I didn't have this made ahead of time; she says it gives it a cheesy taste and is very healthy/good for digestion.) The texture is sort of amazing, and it has a very cashew-y/coconut-y flavor. There's no baking involved, just food processing, pouring it into the pan, and chilling in the freezer then fridge. I really love the crust - it's basically nuts, dates, coconut, and cacao nibs - and I think I'll use it next time I make a regular cheescake, as well.

That's all I've got for now. We haven't been doing much at all lately. I don't have any new pictures. It seems like when we make it a priority to eat even healthier, that is all that gets done. Plus, I have even more dirty dishes. Oh, yeah, we had to take Dash to the ER this weekend because he was being wild and fell off the bed, landing on his head. Okay...so what else is new? BUT...he started saying he was nauseous, was laying his head on the toilet, looking totally out of it, and then he threw up.

Apparently, he is just fine, though. I guess throwing up may or may not be indicative of a serious problem. He is the same kid who had to be taken to the ER years ago when he knocked his wooden highchair over and hit his head. He repeatedly threw up that time, too. This whole experience did not bode well in my quest to win Ryan's support for child number 4.
Posted by Jenny at 8:10 AM 2 comments:

During the weekend of New Year's Eve, we did a little Missouri-Illinois tour to visit with a lot of family and friends. We headed up to St. Louis to spend New Year's Eve night with my sister and her family. For some strange reason, I didn't end up with any pictures of them. 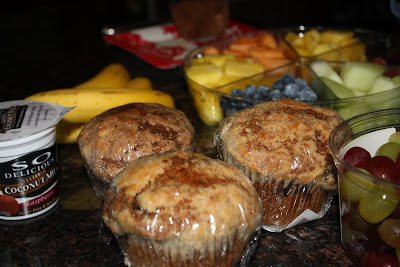 I'll have to make up for it with photos of the luxurious vegan brunch she served us - which included fruit and berries, yogurt, Chicago Diner muffins, 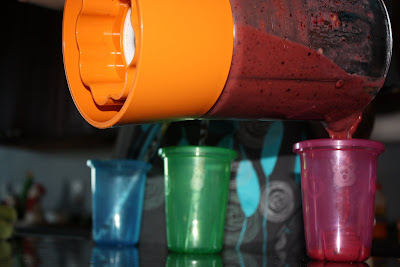 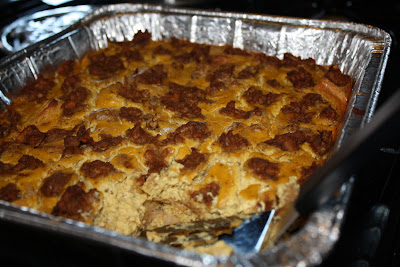 and breakfast casserole, which we have renamed Cary Casserole.
Here is the recipe; it was delicious. I've never had anything like it; it's definitely a repeat-er.
Posted by Jenny at 8:43 AM 6 comments: