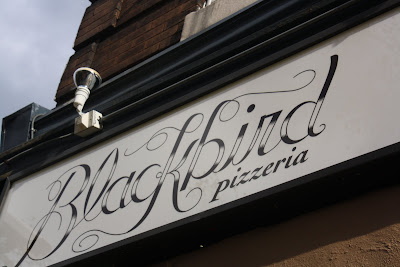 Sooo...have you read enough vegan pizzeria accolades yet? You're going to have to sit through just one more. 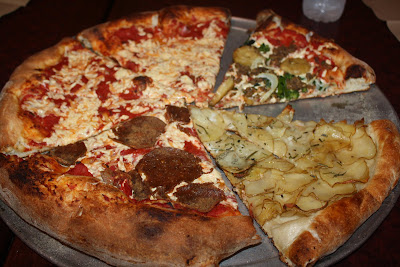 Truly, Philadelphia is such a vegan-friendly city, and there is no reason to get stuck going to the same place three meals in a row. It's just that sometimes when you're tired, hungry, and you don't feel like wandering off into bad-traffic parts unknown, it's easier to stick with what you know. I wondered if the employees would recognize us and question whether we ever feed our children any other food groups. Even though I changed Sissy's hairdo and added a cap to my head, lo and behold, the jig was up; we were declared "their best customers." If only they knew they how generous I am with free advertising.

I learned that Blackbird has only been open for about "a month and a half" claimed the cashier. 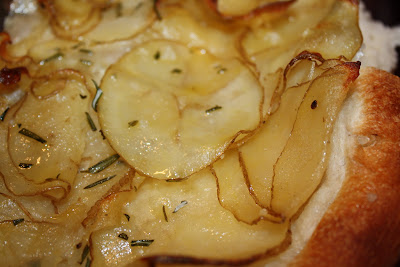 Let's look at this potato pizza close up. We are all just raving about this stuff.

I will say that the 2nd time we came, the potato pizza wasn't quite as tasty as the 1st and 3rd times. Almost, just not entirely. Maybe it wasn't as fresh, or maybe there weren't as many spices the 2nd time.
Clearly, I'm going to attempt a potato pizza when I get home.

Here is one I think is lovely with different colored potatoes. 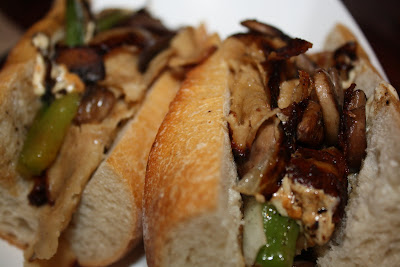 The actual main reason we sojourned back to Blackbird was Ryan's feelings that a Philly Cheesesteak was imperative for celebrating our visit. (I actually had a "duh!" moment when I made the connection of Philadelphia with its cheesey successor.)

I've ordered cheesesteak sandwiches from a few different vegetarian restaurants, and I've yet to find one I didn't like. This one was heavier on the bread than I may have preferred - and light on the seitan, but I liked it and would order one again. (Well...if they were all out of pizza that day, then I would.). Also, this was just one sandwich; I definitely don't think I could have eaten both halves by myself. 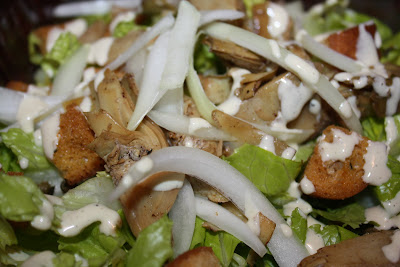 I wasn't pleased with myself for all of that flour running through my veins, so I shared my sandwich and ordered a caesar salad, as well. This one had onions, artichokes, and crouton, among other things. 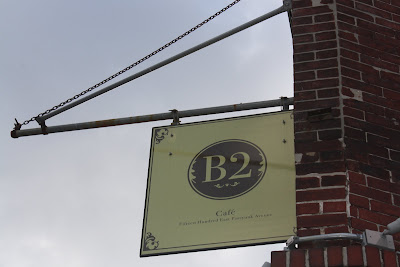 Later, we stopped by B2 because I had heard they served "vegan softserve." It's a small, eclectic coffee house. They aren't entirely vegan, but there are many vegan simple sandwiches and vegan desserts.
We all liked the ice cream. It tasted like homemade icecream. Ryan said it definitely had a soymilk taste to it, which wasn't a bad thing.
They were very nice because when my 3 year old dropped her icecream cone on the ground, they replaced it for free. I offered to pay, but they refused. 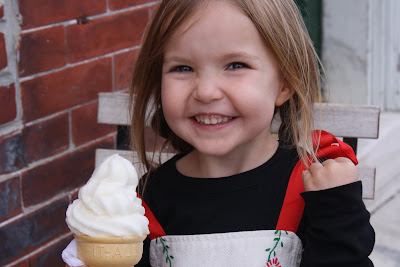 Some preferred their softserve in a cone. 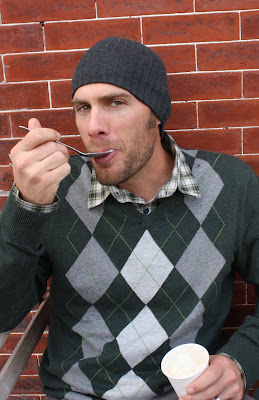 And the rest of us ordered ours in cups.
I would have chosen cone if it had been chocolate.

Tomorrow, I'll try to write about my afternoon/evening from "you know where" which was at least pleasantly topped off with a visit to one of my all-time favorite restaurants, Candle Cafe.
Posted by Jenny at 8:19 PM