Vegan MoFo: My Vegan Story and a Giveaway

I've mentioned before that I've been a vegetarian most of my life. I'm going to tell you a bit more about that, since a few of you asked, anyway.
I came into this world ready to eat. 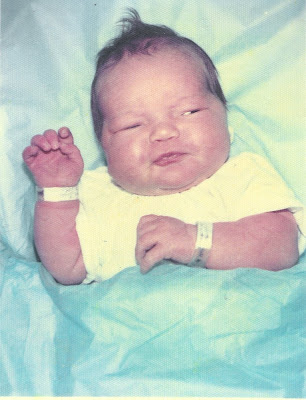 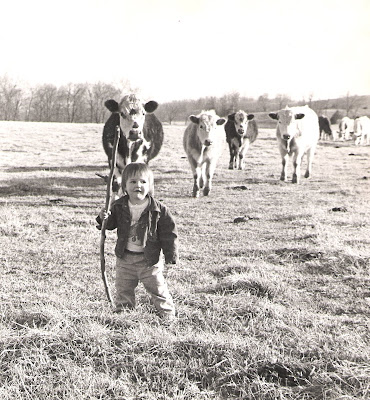 Food, however, quickly became a very confusing issue for me. A lot of people assume that a life-long vegetarian must have had vegetarian parents. I did not. In fact, I grew up in the Midwest: my Grandpa raised cattle, my dad often had his own cows, and most of my neighbors were farmers, as well. I honestly had feelings about being a vegetarian...as soon as I could comprehend the situation at all. 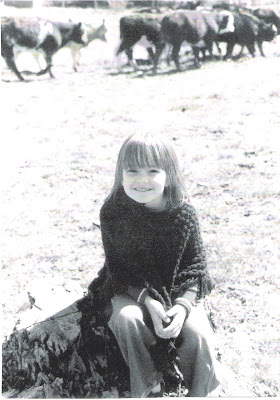 As soon as I started showing signs of vegetarianism (seriously, I was probably 3 or 4), my parents (bless their heart) lied to me about where meat came from. Vegetarianism obviously wasn't too prevalent in the Midwest during the late 70's, early 80's (still isn't), and I don't blame my parents for worrying about my health and well-being. They were able to stall me for a year or two. I stopped eating red meat first. They convinced me that "chicken" was "store-bought," therefore I ate chicken for awhile longer, sincerely imagining the workers concocting it in the back of our IGA. My older, wiser brother, who did not miss an opportunity to tease me, would make "Bawk, bawk" chicken noises with his nuggets. He also ended up informing me that all meat came from animals. So that was it for me. I found the whole idea of eating a dead animal revolting and sad. I have this early memory of pulling back my bun on a McDonald's hamburger, just staring at it, thinking it looked...gray...and just wrong.
Although my parents were probably annoyed and surprised by such final decisiveness from a 5 or 6 year old, they could have been much less accommodating than they were. My Mom always made sure I had something good to eat. They could have tried to force me to eat meat, but I think they understood my feelings about it. I think they also realized early on how stubborn I can be.
I do remember sitting at the kitchen table in my first house (so I couldn't have been more than 3 or 4), refusing to drink my glass of milk. (I did still eat dairy, but I didn't like the taste or idea of straight up milk.) My parents told me I had to sit there until I finished it, but I sat there so long, it got warm. I refused to drink it warm so they put ice cubes in it. I don't remember if I ever drank that glass of milk, but I'm guessing...no. 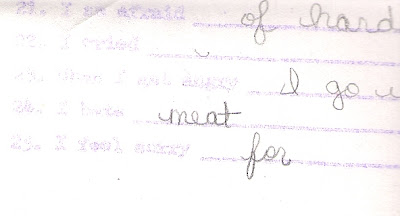 I found this old questionnaire I filled out at school, at the age of 11. It says: I hate____, and my answer was "meat."
As the years went on, I began reading labels and turned away anything with chicken broth or lard, etc. (There were a lot of mainstream cookies back then baked with lard.) I stopped eating eggs in elementary, and by late elementary, I even stopped eating anything that contained eggs.
It was hard on me, raising baby calves. On one hand, it was fun to have them as pets, and we gave them all names. (We named them after St. Louis Cardinals: Whitey, Ozzie, Reggie, etc.) I helped bottle feed them, and I always fought back tears when we had to send them to the sale barn. Once, one of our calves (Bug-Eye...the only one not named after a Cardinal) was sick and wouldn't eat. I sat up in his calf hutch with him, petting him, crying and pleading with him to eat so we wouldn't have to sell him early. Warning - more sad stuff ahead if you want to skip the rest of this paragraph: When Grandpa and Dad would castrate our calves, I would shut my bedroom door, with the pillow over my head to keep from hearing their cries. It was also really hard to listen to them cry the first nights we had them...as they were missing their mommas...I just felt it, really early on...how could you look into those beautiful eyes of a cow (because honestly, cows have the biggest, most sincere eyes), then later on that day eat a hamburger.
I know that one reason my parents didn't worry about my health was because I ate a LOT of dairy. I grated cheese on almost everything I ate. I loved ice cream. I am aging myself here, but this was all before we had internet so I really felt alone in my decision. I never even saw a health food store until I was in college. I felt almost embarrassed and apologetic about being a vegetarian. As in, I realize I'm the weird one who doesn't eat meat.

This was another page of the questionnaire: I said I wanted to be a "super writer" and live on a big farm with a big house and have lots of animals. My favorite foods were lasagna and burritos (same kind of food I prefer present day). And, incidentally, my favorite books were the Sweet Valley High series.
Then during my first week or so off attending classes at college, I was listening to my geography professor. I don't remember exactly what he said, but it had something to do with different cultures and how we drink cows' milk. Something within me immediately clicked, and I decided then and there, I would never eat dairy again. I had even just started working at a place that was famous for its cheese dip, and I also had to make twist ice cream cones all day. I was not tempted anymore.
I only ate dairy knowingly three times after that, all within the first year of being vegan, and all of them happened to be on dates. (Once the guy said, "I know what you want...you've got frozen yogurt written all over your face." My eyes went large in the dark car, but I somehow choked the yogurt down. I hate that I was too shy and weak to speak my mind back then. (FTR, some of you reading this aren't vegan, and some of you who are vegan occasionally eat something non-vegan. What I'm criticizing here isn't that I ate something non-vegan; it's that I did it to avoid appearing less attractive to a boy.)
I wasn't the healthiest vegan in college. My happiest food days were when my Mom would mail me a Subway card filled with stamps so that I could get a free sandwich. I wrote more about my college years here.
Over the years (Yay, internet, which I finally got for the first time in 1999...we were a little slow...on a sidenote, I remember walking past people on "the internet" in the college computer lab, thinking, "Ew, I could never do that. The screen looks so busy; how would you ever know what to click on?!"), I've become more aware of the cruelty and nonsense behind the meat and dairy industry. I've also continued to realize more of what is and is not actually vegan. (My mom became less patient with me, the more stuff I found to cut out...vitamin D3, white sugar, etc.) I gradually added "health reasons" to my list of why I was a vegan. I stopped buying leather, wool, down, and silk probably within a few years of becoming a food vegan - as soon as it registered with me what it meant to support those purchases and as soon as I realized it was unnecessary to buy those things with so many alternatives. It has all been a gradual progression since I was...well, 3 years old.
So that's my story. I'll write more about how veganism fits into my own family's lives another day. I'd love to hear your vegan story so consider doing a post about that if you have writer's block during Vegan MoFo!
*****************************************
I mentioned yesterday that I am hosting a giveaway for CSN Stores. This is a $40 gift credit that can be used for anything in their 200+ stores. My last CSN winner picked out these dishes. You can buy cookware, bakeware, kitchen organization supplies, furniture, kid stuff, gardening gadgets, or a steam mop, perhaps? (Sorry: CSN can only ship to U.S. and Canadian residents.)
Mandatory entry: Leave a comment about this post.
Additional entries (leave a comment for each entry):
1)Become a google friend connect follower of this blog or remind me that you already are.
2)Put me on your blog roll or remind me that you already have.
3)Visit CSN Stores, then come back and tell me something you'd like to win.
4)Blog about this giveaway and tell me that you did.
I will pick a random number generated winner on Thursday at 9 p.m. on November 11th. Good luck!
Posted by Jenny at 5:24 PM