A couple of other products I ordered in my latest shipment from Pangea (and tonight at 10 p.m. central time, my giveaway for a $40 gift certificate ends): 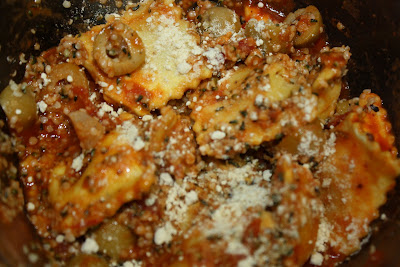 Parmazano
(on my ravioli with sauce and green olives)
I ordered this because I hadn't tried it before, and I like to try everything (vegan). And also because Pangea's website declared it "the closest thing to real parmesan cheese we've ever tasted."
Ingredients: GMO-free soy flour 72%, non-hydrogenated vegetable oils 17%, rock salt, flavoring (vegan), vitamin E (antioxidant). Produced in a nut-free facility.

They also carry Galaxy Nutritional Foods parmesan alternative (also made of soy) and Parma! (made of nutritional yeast, walnuts, and salt), both of which I like. What I haven't tried are the "chipotle cayenne" and "garlicky green" versions of Parma, which I think sound good. 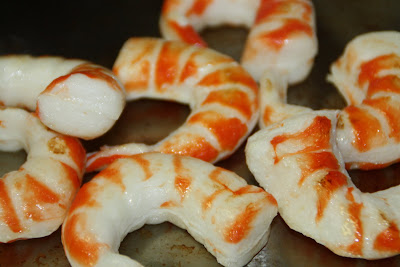 I also decided to try Sophie's Kitchen Prawns (shrimp). I've always passed by the vegan shrimp in the store because it freaked me out for the same reason I can't handle eating Smart Dogs, etc. They look and feel too "real." I continued to be freaked out as I cooked them, and my kids were squealing with nervousness, too.
Ingredients (non gmo): Polysaccharide gel (konjac powder, beta-glucan, water for hydration), modified potato starch, organic agave nectar, sea salt, carrageenan, alginate (from seaweed), paprika, calcium hydroxide. 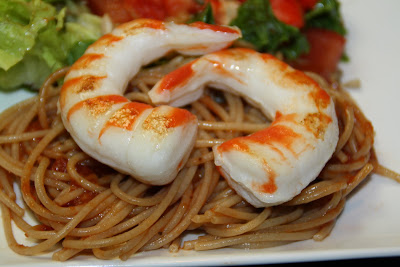 They're pre-cooked, ready to eat (and no poo!) when thawed, but I pan-fried them. I also had no idea how one would eat shrimp normally, so I googled it and came up with pasta as a quick solution. 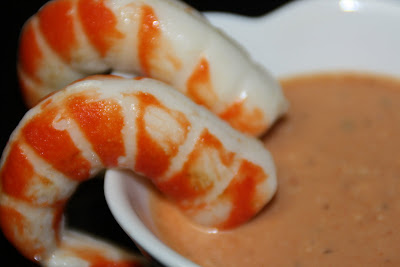 The taste of this product was fine to me. Very plain like a noodle or tofu (but with perhaps a bit of an aftertaste that wasn't bad to me, but some might not like it...my husband and 1/3 of my kids liked it). I also made a quick "cocktail sauce out of Vegenaise, hot sauce, and ketchup. I never had any attachment to seafood, so there's no reason I'd run out and buy these tomorrow. But I'd definitely eat them again sometime, especially if I had a recipe that might include them.
Posted by Jenny at 10:21 AM