I am almost a year behind in completing the documentation of our 16 Day Road Trip Extravaganza. (We drove from Arkansas to New York City through Tennessee, the Virginias, Pennsylvania, etc.) It seems irrelevant now, but I want to do it, anyway, (a little at a time) for my own keepsake purposes. And also that way I can delete some food pictures from my disc and computer. I don't want my kids to think one day that I took more pictures of food than of them! 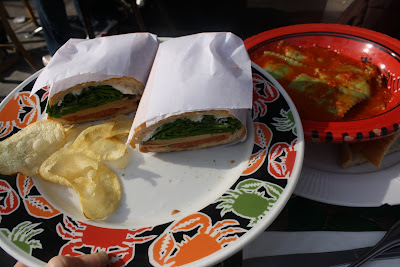 Atlas Cafe is located on 2nd Avenue in the East Village. We had been here on previous trips, only for the purpose of getting dessert. The space is very small (hard to even stand and order at the register, if they're busy), but a plus for the place is the enormous selection. Here is a review from Quarry Girl, which includes a picture of one of their entire wall of menu choices.
The above picture is Vegan Ravioli and an apparently forgettable (because I don't remember anything about it, and I'm usually pretty good about remembering my NYC food) sandwich my husband ordered. Atlas is not entirely vegan and not even entirely vegetarian (I think they sell the "chi-" word and the "fi-" word.), but the majority of it is. 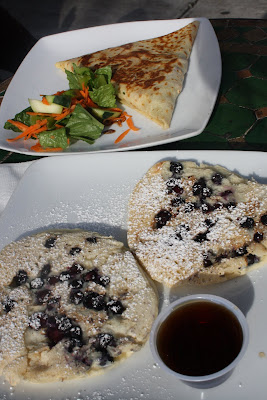 One item that I think is probably popular are the Vegan Crepes (above). Again, I can't remember which one we ordered, but I think it may have been the first time I'd ordered vegan crepes at a restaurant. Everyone picked something, and we all kind of shared, including these blueberry pancakes. Forgive our very flour-y meal; we tried to make up for it later that day. 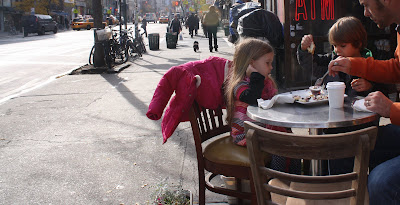 There isn't a lot of seating at Atlas inside, but there are a few small tables outside you can enjoy on a nice day. Fortunately, it was such on this mild November morning. 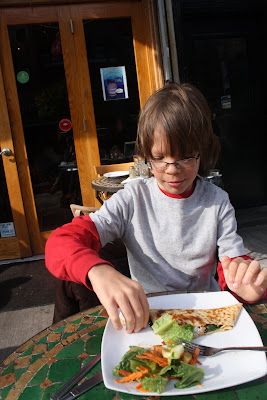 I hate to say it, but the customer service was extremely strange when we were there. I don't remember the specifics, but I remember saying to Ryan, "Was that strange? That was strange, right?" I've read some other bad reviews online (such as in cooking vegan food, along with the meat or touching money then food without washing hands, etc.), but then again, other reviewers seem to love it (and everything else was fine to us, other than the strangeness).
The "pros" of Atlas are the wide range of food choices with plenty of vegan options, the hours (something like 7:30 a.m.-1:00 a.m., which are really nice, because in "the city that never sleeps," we always have the hardest time finding a vegan place open early enough or late enough), AND... 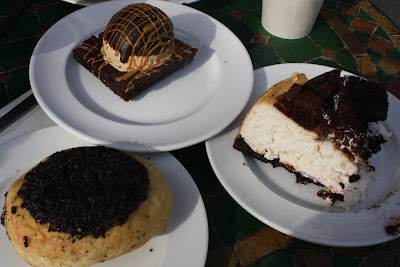 some kind of Peanut Butter Chocolate Brownie,
Brownie Topped Cheesecake, and Cookies 'N Cream Doughnut
their BIG (I think the biggest in NYC.) selection of VEGAN TREATS (brought in from Bethlehem, Pennsylvania). Seriously, the case is so full, it's really hard to choose. I had regretfully given Vegan Treats a "meh" kind of review on my Blackbird Pizzeria (in Philadelphia) review. But Vegan Treats redeemed itself, as I knew it would. In my opinion, the best dessert from Vegan Treats are the doughnuts. To get the best doughnuts (like glazed!) at Atlas, you have to be prepared for whatever day they are delivered from PA (maybe Tuesday?). I think they disappear pretty quickly. 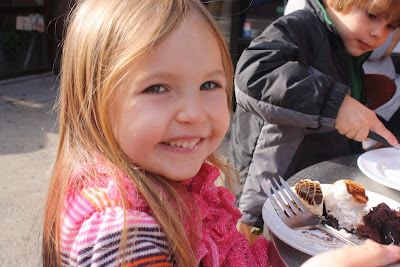 We passed the plate around for shared bites. Except Kid #1 didn't share much of his Cookies 'N Cream Doughnut. That's okay, though; as the oldest, he gets shafted by his little brother and sister enough that he deserved to eat his doughnut in peace.
My final word on Atlas is: go for the Vegan Treats, go if you're just curious about the crepes, etc., and go if you're standing right at the corner, starving for something vegan to eat. Otherwise, there are 100% vegan places nearby that may make you happier.
*************************************
If you haven't entered my giveaway for a $40 gift certificate to the online (and store-front) Pangea, it ends Thursday!
Posted by Jenny at 10:08 AM