Cloudy With a Chance of Meatballs 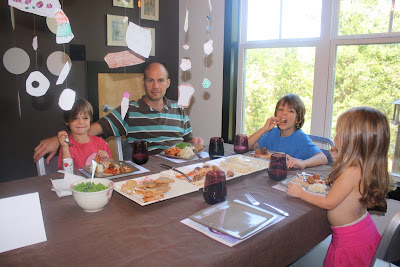 This weekend we went to see Cloudy With a Chance of Meatballs. It was cute and entertaining, for sure (although, I'm still a little confused by Baby Brent and the birds Flint invented...I think I must have been divvying popcorn during those explanations). We had been excited about this movie coming out for at least 6 months. Because of Tornado's obsession with weather, he loves this book. I sometimes get nervous about books being made into movies, and at first, I was thinking, oh, no this is nothing like the book, but it turned out to be okay that way. And there are many similarities, as Tornado has been pointing out all weekend. There was even a little love story in the movie, just for me.

Before the movie, we had our little CWACOM meal. We picked a few foods from the book. During the meal, we put ourselves into character by saying things like, "I wish it would have rained some juice today; all we have is milk," and "Hope it snows some popcorn later for the movies." 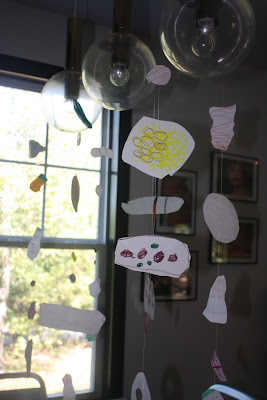 First, though, the kids had worked really hard drawing pictures of food and cutting them out to hang above the table. We taped them to clear "fishing" line, hung from the lights. 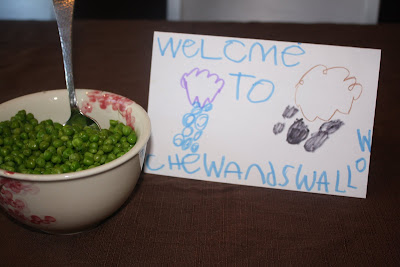 Tornado made this sign for the table that said "Welcme to Chewandswallow." We ate peas... 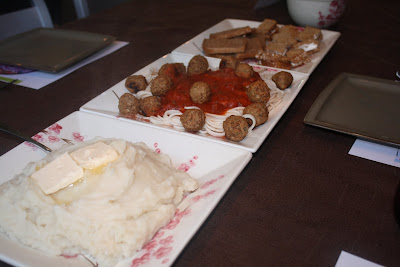 ...and a "hurricane of bread," "fifteen-inch drifts of cream cheese and jelly sandwiches," and of course spaghetti (made from quinoa and rice flour - something new we tried; it's rich in protein) and "meat"balls, and mashed potatoes with Earth Balance (..."it's funny, but even as we were sliding down the hill we thought we saw a giant pat of butter at the top, and we could almost smell mashed potatoes."). This was perfect for Tornado because, for some reason, he always wants to eat mashed potatoes with spaghetti. He never gets that combination from me, though, because I'm more of a "cook only one thing per night" kind of mom. Googie always makes them both for him, though. 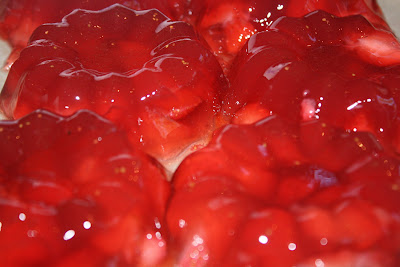 And a "wonderful Jell-O setting in the west." It wasn't actually Jell-O, of course; it was our gelatin-free Natural Desserts Jel filled with chopped strawberries. The other day we were talking about how we should stop calling it "Jell-O," and I told the kids we need to make up our own name for ours. Dash automatically said, "Jelto." So Jelto (pronounced Jel-toe) it is. 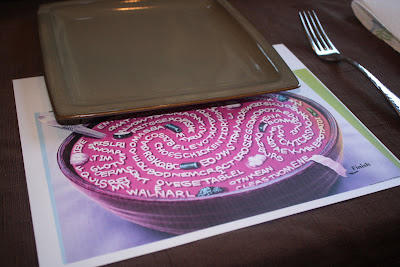 It was Tornado's idea to use this picture he got out of one of his Highlights magazines. I photocopied it to make place mats for everybody.

After a nap - we ALL, every single one of us, went into a deep sleep - we headed to the movies, which is conveniently only a couple of minutes from our house. Ryan was paranoid I was going to get in trouble for my overstuffed purse that contained two bags of organic microwaved popcorn, little popcorn bags for divvying, a container of melted Earth Balance, a salt shaker, napkins, juice boxes, 3 packages of Annie's fruit snacks, a baggie of dark chocolate, a water bottle, and 2 soda bottles for Ryan. (For the record, the kids and Ryan - not me, though - do often eat movie theater popcorn; I was just in a "sick of all the junkfood my kids are always surrounded by" mood this particular day.)
I just wrote a long explanation regarding our recent obsession with Prison Break (we're on season 2; it's what we watch after the kids go to bed)...how we're always on the "look out" now and suspicious of people and things out of the ordinary (we even sneak up on one another now and jokingly look through each other's belongings)...how we think we're so smart now about these things, we'd for sure be able to get out of prison or any jam, for that matter...but I deleted it because you might think I've gone a little kooky.

Regardless, sneaking food in the theater is no problem; who did Ryan think he was dealing with here? I had a whole speech prepared about how I would tell them if they know what's best for them, they'd turn and walk in the opposite direction before I call the Consumer Protection Agency over my rights to healthier food and slap them with a lawsuit so big, they'd be ruined! Of course, it didn't really come to that because the theater doesn't even check tickets, let alone for contraband food in purses...so unfortunately, I'll have to wait for another opportunity to try out my new, tough street cred...
Posted by Jenny at 6:25 PM