Our family has returned from a fabulous week in North Carolina. The five of us met up with my parents and my sister and brother-in-law plus their two kids and stayed in a condo on Wrightsville Beach. We drove as far as Birmingham the first night, which was a real accomplishment since we didn't leave town until after 7. The next morning, we stopped in Atlanta. 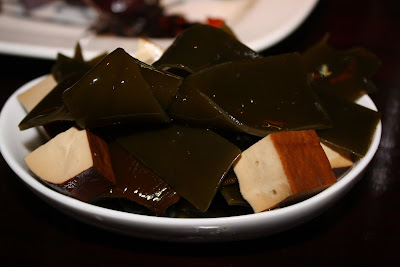 We ate lunch at Cafe Sunflower, a great-looking place. When we walked in, we were a little like - oh, no - are we dressed nice enough? are our kids going to behave? (Ryan always worries about those things more than I do, though.) We ordered a bunch of food and all kind of shared it, which is always my favorite thing to do. This was the tofu and seaweed appetizer. The seaweed tasted like pasta; it was pretty plain but good! 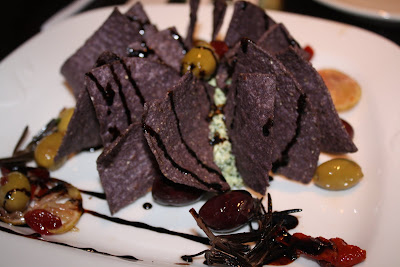 The only reason I wouldn't give this restaurant perfect marks is I didn't feel totally confident when the waiter would tell me if something was vegan or not. I always feel a bit nervous when they hedge a little. (And I'm not a fan of menus that aren't clearly marked.) I questioned him further about the fried green tomatoes after he told me they use no eggs, and he went back to check; indeed there was eggs in the batter. This spinach artichoke dip was labeled vegan, though, so I was able to enjoy it wholeheartedly (and isn't it so pretty, too?).
When the waiter started to take away the plate with a few olives left, I said, "Oh, wait! They wanted those," and I plucked them right off the plate.
And when I said "they," I really meant "I." 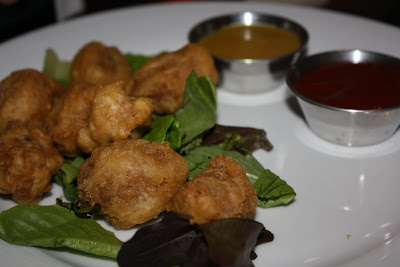 Dash picked the soy nuggets. This was one of things I felt skeptical about whether they were vegan or just vegetarian. If there is any question in my mind, I won't be able to enjoy something. So I didn't try them. 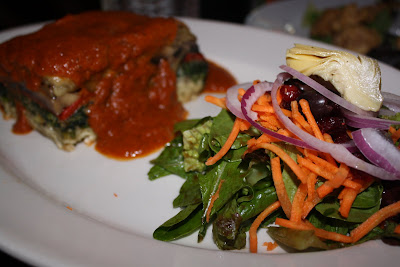 I wish you could have seen Tornado's face light up when they set this plate in front of him. He was very sure he wanted to order the orzo eggplant lasagna (he always wants eggplant anything). It was probably one of the "prettiest" (and largest) meals he's ever had at a restaurant (the lasagna had no noodles; it was layers of vegetables), and he was so excited. I helped him eat some of it, but he did really well putting it down. He kept holding his stomach and uncomfortably moaning, and I reminded him to stop eating if he was full. But he did NOT want to leave any of this delectable dish. 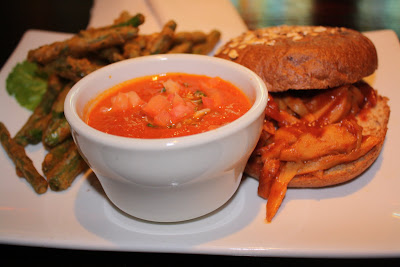 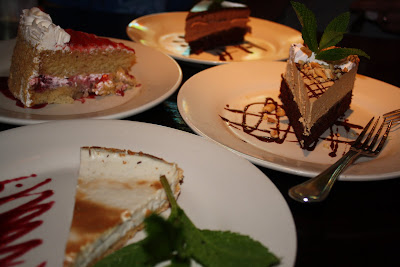 We got a little carried away when ordering desserts, especially since they were $6 apiece. (Ryan and I were reminded how much it costs to feed the whole family at a restaurant like this - when we'd rather the kids order the healthier entrees than the so-so kids' meals...and desserts are a must.) We should have just ordered 3 pieces because we were struggling at the end. Poor little skinny Tornado loved that strawberry shortcake so much (it WAS delish) he gave it all he had. My favorite was the key-lime pie. When we were finishing up, a man who had been sitting with other people nearby came up to our table and complimented us on how well-behaved our children were. Ryan and I felt so proud. That hasn't happened too often!! :) 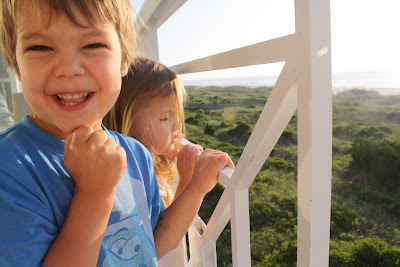 The next morning, these two were the first to wake up (Sissy still had sleepy/cranky eyes.), and they were very anxious for their first glimpse of the beach (since it was dark/bedtime when we arrived). Although Dash was at the beach in California when he was about 20 months old, this was really the first beach trip for either of them, and needless to say, they were READY!
Posted by Jenny at 9:58 AM