Our last morning in New York City...we had to get up and pack our bags in preparation for leaving. Then we walked 12 or so blocks over to the Good Morning America studio in Times Square because our flight didn't leave until 11:00. (Quick breakfast at Jamba Juice.)
I was sad that our little getaway was coming to an end. Ryan and I had a really special time together; it was good for us to be together for 4 straight days. I was worried we'd get to a point of not having anything to talk about; after all, our conversations are usually so haphazard from being interrupted by the kids. However, we chatted and laughed constantly. It's sort of ridiculous that this was only our second vacation (for more than a night anyway) by ourselves. (We went to Dallas/Houston/Galveston the 2nd year we were married. Our other vacations before we had kids were with our families.) Even our honeymoon was pretty local (Tupelo, MS) and had to be cut short because we were starting our teaching jobs. We need to do this more often.

Back at Good Morning America... 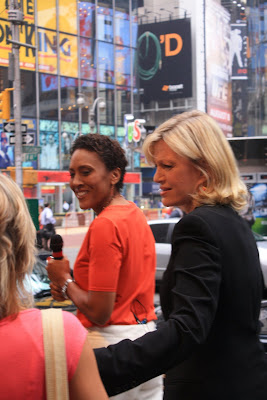