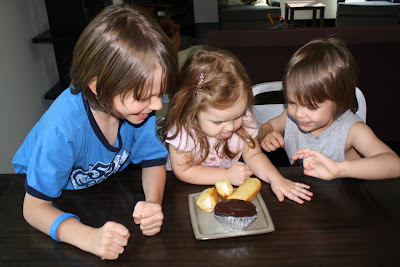 Today we got a little box delivered from Pangea. Receiving packages in the mail of any kind makes for a great day...and especially if they are filled with vegan treats. We had a little "cheese" tasting with three different kinds of cheeses. (More on that later.)
We also tried out the vanilla canoe boat snack cakes, a vegan version of Twinkies. And they also split a Moo-Cluck Creme-Filled Cupcake. No complaints here. I only had a tiny bite or two of each, just to try them, because I am on a serious diet. Seriously. It's not pretty around here these days. I've mysteriously (disregard pictures of vacation meals) gained ten pounds in the last year. And it mysteriously won't go away. Wish me luck. 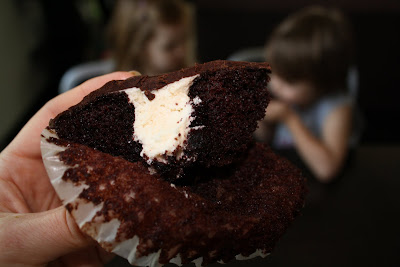 creme filling...
"Cake" is not generally my first choice for dessert, unless it has lots of frosting (I'm like the kids at birthday parties who only want to eat the icing off the top.) or layers of something creamy or chocolate-y inside. Mission accomplished with each of these. 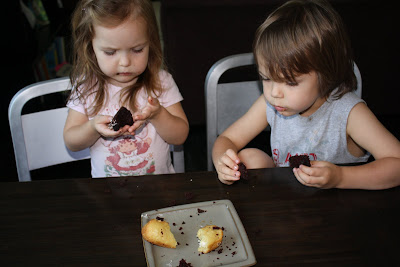 "I don't know which one to pick because both of them is so good."
Those were the exact words out of Dash's mouth. Tornado chose the vanilla, as I knew he would. If it seems like we're being weird, excited about a "Twinkie," we don't ever eat these kinds of things. We save it up so we can get really excited! 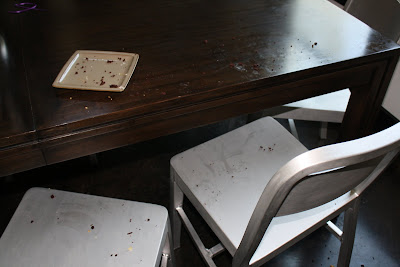 the aftermath...picture doesn't really do it justice
Posted by Jenny at 10:01 AM