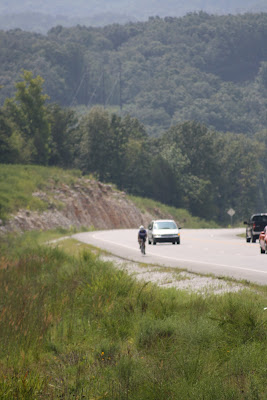 This weekend we headed north for a family get-together (more on that later). Ryan got up around 6 a.m. (while we were all still sleeping) and took off on his bike. The plan was for me to get up and get the kids ready/car packed and pick him up along the way. We got to try out our cool, new bike/luggage rack. 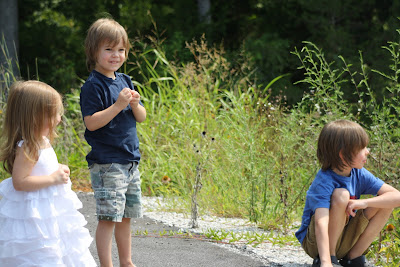 We planned to meet at Leslie, Arkansas, which is about an hour away. However, he was too fast for us. My Mom and Dad were ahead of us, and Mom called me to say he was not in Leslie. I think she was getting worried because there were segments of highway with little or no shoulder. We all thought it helped make the trip go by faster. Like - "Where's Ryan?" They finally passed him in Marshall and actually stopped and handed him a drink. We finally caught up with him, and the kids and I got out to greet him. We cheered and clapped (a little cat-calling from me) as he made it up the mountain. 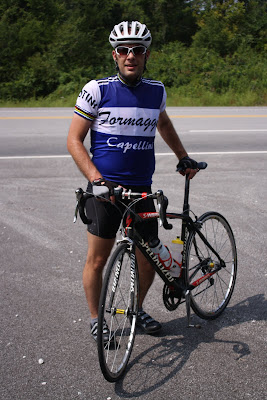 Isn't my hubby a total hottie? I was so proud of him. He wasn't even huffing and puffing - as I would have been after just riding up that one mountain, let alone also riding 81 miles (a very hilly 81 miles). I huff and puff on the slightest incline, and I have to raise my body up to give it all I've got when pedaling. It's really nothing for him, as he's ridden over 220 miles at once before. 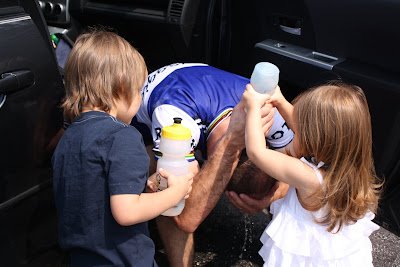 And then he got a little help cooling off. I think it's so great for the kids to see him doing things like this. It's easy to become sedentary (tired!), and clearly we all can't ride up mountains on a bike, but I think it's important for all parents to push themselves and work toward goals (no matter what genre they are - physical/educational/spiritual/musical, etc.). Not just for ourselves, but for the sake of being inspiration/examples to our children. I know the kids are proud of their daddy.
Posted by Jenny at 7:36 AM

Email ThisBlogThis!Share to TwitterShare to FacebookShare to Pinterest
Labels: My Husband, My Kids