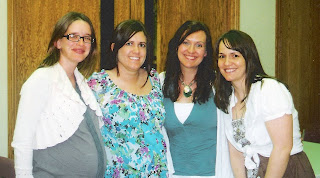 I mentioned I have been out of town three weekends in a row. The first weekend we had double shower duty. On Saturday, we threw a wedding shower for Angie (pictured here: Elizabeth, Angie, Missy, and me, taken after Lori and Heather, two of my other highschool friends, had already left). Angie, I've mentioned before, eloped in Las Vegas on 03-06-09. Boy, did she have our email loop going crazy that weekend when we got word that she was IN Las Vegas, already married, without telling us she was even thinking about it. 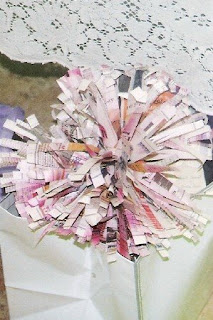 We tried to go the "green" route when planning the shower. We used evites, eliminating paper use, and asked guests to be environmentally creative when wrapping gifts. There were some really fun ideas (wish I would have gotten a picture of Missy's newspaper ribbon; it was very pretty!) like this bow made from cutting strips of newspaper, tying together, and fluffing. 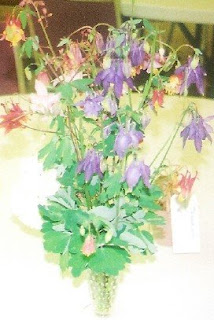 Centerpieces were flowers cut from Elizabeth's mom Jeanelle's garden. We used dishes from the church, where the shower was held. 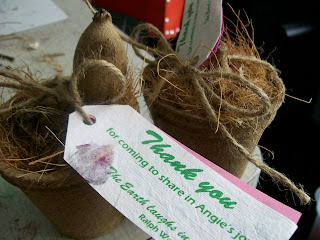 I made party favors by putting flower bulbs (and coconut fiber "moss") in peat pots with recycled/handmade paper tags. 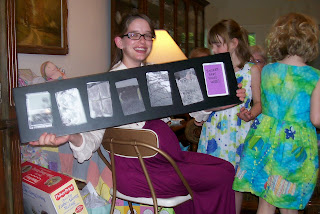 On Sunday, a baby shower was held for Elizabeth, who is due very soon. You can't really tell from this picture, but Angie (our photographer extraordinaire) spelled out Elizabeth's baby's name by finding objects outside that looked like letters (like the gate/fences that looked like an E and H). It was very cute, and I might have to try that sometime. 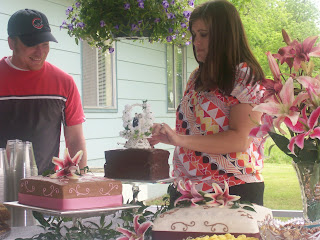 This weekend, Angie's and Lafe's moms threw them a barbeque to celebrate their marriage. (Ang, Lafe has now made two appearances on my blog; tell him I'm sorry, and I'll try to cut back!) 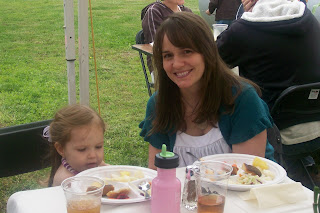 Angie's mom, Joyce, bought and prepared so much food especially for Sissy and me. I can't even tell you how nice that is. She made vegan coleslaw, potatoes, rolls, Tofurky kielbasas, cheese dip, and fruit. She was so dismissive about what a big deal it was to me, but seriously...reason #89 why I want to move back to Missouri. It's nice to be around people who know you and love you. And go to trouble for you. 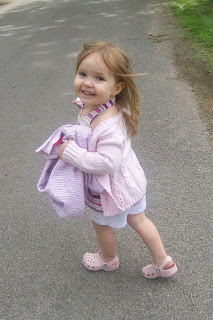 It was really nice getting to spend the day solely with Sissy. I think I do that often with Tornado and Dash, and I don't do it enough with her. It's interesting how the kids act a little bit different when they are on their own. She just seemed like a little girl, rather than a "baby." She carries a "blankie" now, though. Fortunately, it doesn't have to be any particular blanket, as I am sure we would not be able to keep up with that; any of her little blankets will do. 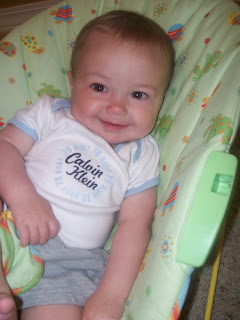 Trips up north also mean getting to spend time with my nieces and nephews (and brothers and sisters). I LOVE my little Pierson. I don't know what it is about him; maybe because I've hit the two year post baby mark. Biologically (not rationally), I've got "baby" on the brain. He IS, however, one of the cutest babies ever.
Posted by Jenny at 6:39 AM