My mom drove my sisters and I to Chicago last weekend for a celebration of Cary's 30th b-day, which was in April. It also worked out perfectly that it was Mother's Day weekend, and we were able to spend that time with our momma. 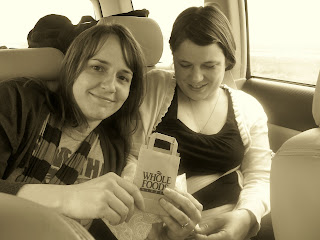 Cary had prepared gifts for us all to open,
one every hour during the drive from STL to Chicago. 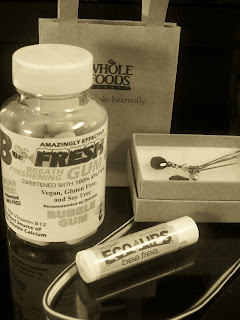 My gifts included a $10 gift certificate to Whole Foods for snacks during our trip, my favorite gum, chap stick, a headband, and earrings she purchased at her friends' jewelry show.
You can check out Mia Sorella Designs here. 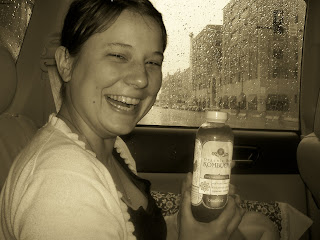 Clearly, Tracy was very excited about her Kombucha drink, which she loves. 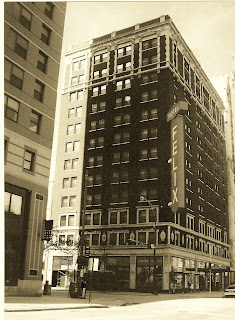 We stayed at Hotel Felix, an eco-friendly, hip, boutique hotel. 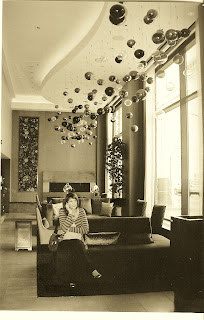 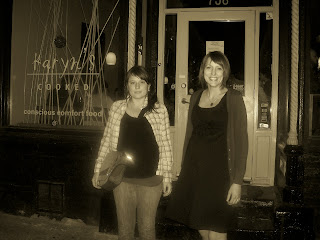 Karyn's Cooked was in close walking distance from our hotel. 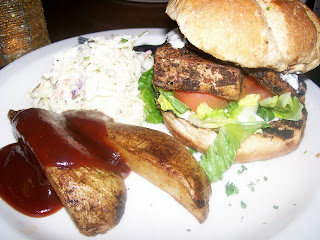 This is probably the best vegan food in Chicago I've eaten up to this point.
It's a great restaurant all around.
I ordered the jerk tofu sandwich, which came with potatoes and coleslaw.
Tracy ate half of my sandwich... 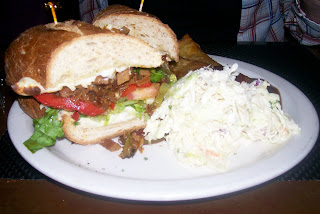 and I ate half of hers. I think this was the Philly "Cheese Steak" if I'm not mistaken. Both were very good. I think I liked mine the best, but it was really spicy. Hurt so good. What I did not get a picture of was the fried basket combo - zucchini, tofu, and cauliflower. I don't remember the last time I had anything breaded and deep fried. It was delicious (the cauliflower was my fave), and it was served with ranch and barbeque sauces. (plus I tried some of somebody's wonderful macaroni and cheese.) My meal was so good, but I was so full. When I said I didn't think I could finish, Cary urged me on.
"Yes, you can. You just have to focus. You have to let your mind go someplace else." 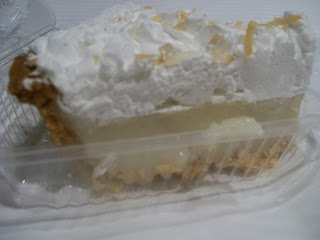 Mom and I took dessert back to the hotel to eat with our in-room movie. She ordered bread pudding, and I got the coconut cream pie. That cream on top was amazing, and I can't believe it's vegan. I really wanted the chocolate pie, but I ordered that last time I was in town - and I was trying to be different. I only managed to eat half of my pie because I was so full. I saved the rest on ice and had it for breakfast. 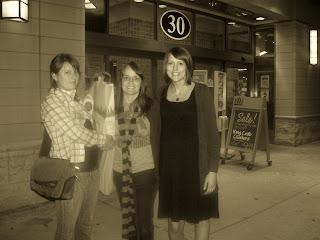 Does anyone else out there choose their hotel due, in part, to its proximity to Whole Foods? We made a few trips here. 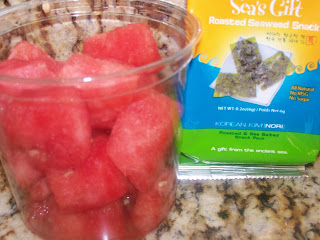 For breakfast, I drank the rest of my acai smoothie drink and coconut pie from the night before. Then we walked over to Whole Foods, and I ate some watermelon and one of my latest favorite snacks - Sea's Gift Roasted Seaweed Snacks. I love these...but I admit, they may not be for everyone. No one wanted to try it as it is green, sounds like you're eating paper, and well, it's called seaweed. I think they're great, though - salty and just a few calories. 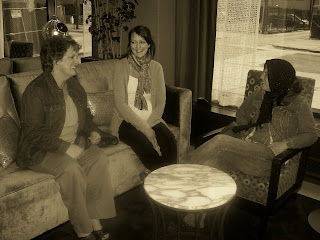 Sitting in the hotel lobby, preparing for a big day on the town...we (southerners) did not adequately prepare for the nippy Chicago weather. By late afternoon, it had warmed a bit, and the next day was nice and warm. 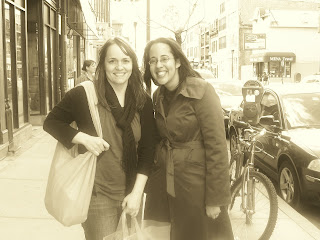 One of my best friends (since the third grade), Sarah, lives in Chicago, and she met up with us for lunch and a little shopping in hip, artsy area of Wicker Park/Bucktown. 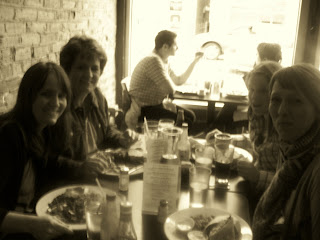 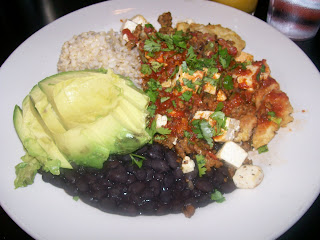 I had been to Handlebar before and had the best Buffalo "Chicken" Wrap. I wish I would have ordered that again because I loved it - but again, trying to be different. Tracy ordered that as a sandwich, didn't like it, and let me have half. I liked what I ordered - I think it was "Vegan Diablos"- it just seemed too much like something I would eat at home. 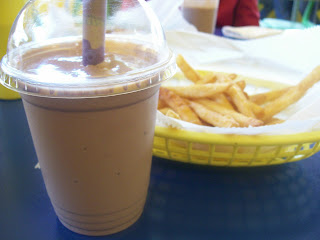 We had an afternoon "snack" at Veggie Bite, which is also in the Wicker Park/Bucktown area. (We all accidentally called it Veggie Bites all day, much to Cary's annoyance.) I'd never even heard of this place, but I will be back. I might go to Chicago again just so I can come here. The milkshakes were delectable, and they were very nice about making mine extra thick for me. Tracy got a chili cheese combo plus a taco for her "snack," heehee. 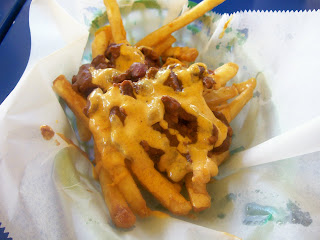 This might have been my favorite thing all weekend. Sarah ordered these chili cheese fries, and we split them. If I had seen those, I wouldn't have ordered my boring plain fries. I loved Veggie Bites, and I wish we could have eaten a whole meal there. (ha, Cary, as I was proofreading, I realized I just called it Veggie Bites again...I'm going to leave it.) 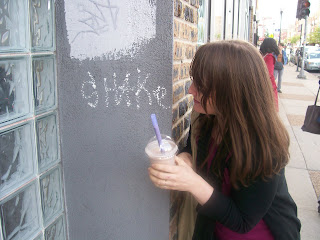 Okay, so I did order another milkshake for the "road." There, I admit it. It was like fate as we were walking down the street and passed a bit of graffiti art. It seemed like all signs were pointing to it, reassuring me of my two-milkshake decision.

I never shop. I really hardly ever do. I would say this was my first real shopping trip. Usually, I don't buy much on vacations because I feel like I already spent too much on everything else. I became a consumer this weekend, though. And it was fun! My complaint about stores is this...nothing opened until 10 or 11. And almost everything closes by 8. It's really hard to maximize your time. Stores, please lengthen your hours! 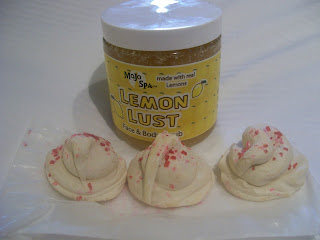 Mojo Spa smelled delicious. It seemed like most/all of their products were pretty natural. I got the lemon body scrub. I wanted to buy this delicious smelling yellow cake with chocolate frosting soap. I was afraid Dash would try to eat it, though. I did get the kids these fun little soaps. 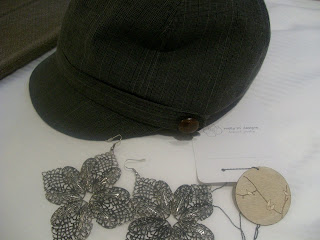 My favorite store, apparently, was Una Mae's Freak Boutique because I bought a jacket, this hat, earrings, necklace, and another sweater, not pictured. I made three different purchase transactions because I kept seeing something else that I wanted. 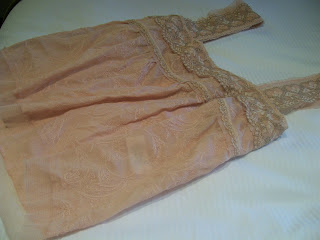 Got this vintage shirt from Buffalo Exchange. 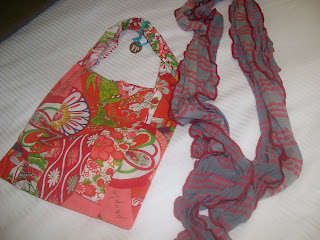 I bought this scarf from Free People. It was on sale (I think I am mentioning that to justify my consumerism.) They use shopping bags made of cute fabric, which was such a little bonus. I'm going to give it to Sissy as one of her gifts. 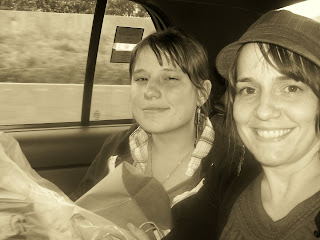 Cab ride back to the hotel, after a long day of shopping...we literally "shopped til we dropped." (I'm sorry; it hurt me to type that as much as it may have hurt you to read it.) 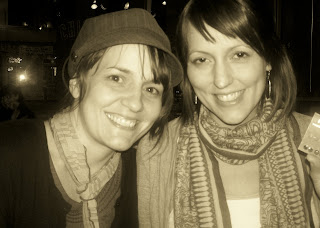 Back out for supper at Pick Me Up Cafe...I gave Cary a b-day gift during every meal. 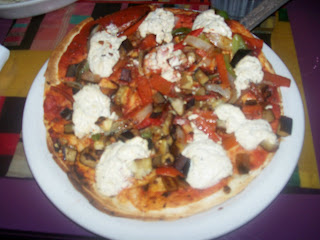 For some reason, we had so much stress in deciding where to eat supper that night. Cary and I were secretly trying to get reservations at "Rosebud" on Rush Street, which is apparently Mom's favorite place in Chicago. She had been so giving and supportive in eating at all vegetarian places, and I wanted to do that for her. We couldn't get a reservation until 9, and we were all just kind of tired. Yet, it was too early to call it a night.
Anyway, we ended up at Pick Me Up Cafe. It was fine. Not my favorite (It wasn't all vegetarian, and it probably wasn't a place I would have chosen to take Mom) but lots of vegan options to choose from so much better for me than going to a normal restaurant. I ordered the Moo-free Pizza. 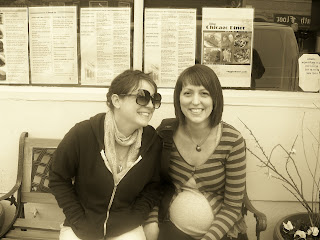 the next morning at Chicago Diner for breakfast 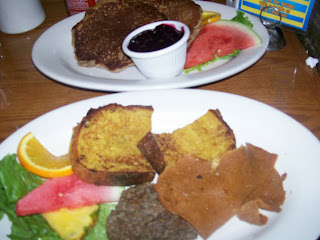 It always nice to go to Chicago Diner, my first love. Wish I could have gotten one of their delicious sandwiches or entrees while we were in town, but it's hard to pass up a vegan breakfast. I do love breakfast food. I had a sausage patty, bacon, french toast, fruit, and two pancakes with berry sauce. In my defense, I only ordered one pancake, but they mistakenly made two. Bonus. It was all very yummy. 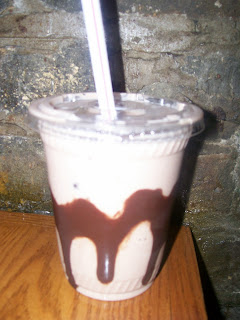 I wasn't going to get another milkshake. Honestly, I wasn't. But I did.
Chocolate/chocolate chip cookie dough. That's all I need to say. 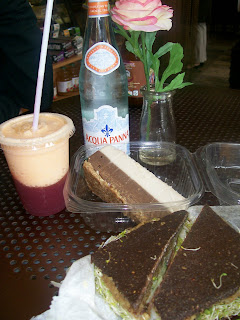 We made reservations at Karen's Raw
after shopping the little area of CB2, Crate and Barrel, Land of Nod, etc.
We really needed to get on the road, though, as we were already looking at an a.m. arrival time. When we got there, we realized it was a $30/person buffet. The food on the buffet looked really fun, and I wanted us all to try it. However, no one really felt like we were $15/person hungry, let alone $30.
Cary and I got these slushies that were delicious. Mine was acai berry on the bottom, goji berry on the top. I could have drank three of those in a row. I also got a walnut pate/sprouts/tomato/avacado/onion sandwich and a coconut/carob raw "cheese" cake for the road home. They were both pretty good. Not to mention my Acqua Panna water. I am pretty picky about my water, as it is mostly the only thing I drink. I am not too fond of spring water normally, but this kind doesn't have that weird spring water aftertaste. Plus, it comes in a glass bottle, which tasted, well, less plastic-y. 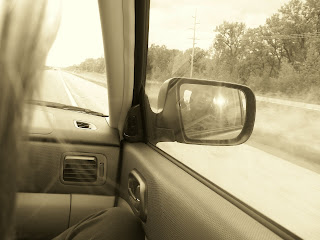 There was plenty of singing going on in the car. You need to maximize this picture to truly appreciate Cary's effort. After much debate over which was the quickest route (it is so clear where we girls get our stubborn, always-think-we're-right personalities), Mom drove the entire way home. (Did I mention how stubborn she is?) I think we got home between 2:30-3:00 a.m. I had a lovely little Mother's Day card (not to mention, the house was very picked up) waiting for me on the counter. It was so good to kiss my sleeping little ones who I missed dearly.
Posted by Jenny at 8:04 PM