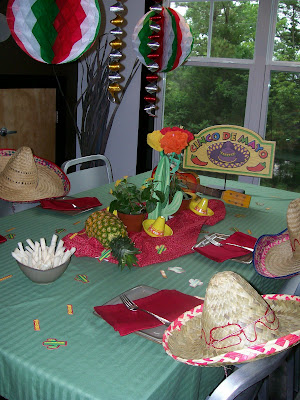 Cinco de Mayo '09 was a hit.
Tornado just finished off the leftover bowl of jicama yesterday. He couldn't get enough of it. Dash and Sissy ate it okay, nothing special to them. I'm trying to go a little more "green" with my parties. As a lover of all things balloon-y and decorative, it's a challenge for me. However, I made steps this time by not getting paper plates and napkins and decorating with items like potted flowers and pineapples and bananas. (and reusing what I already own) I don't know - do bananas work for "Mexican"? I think so. I was thinking of the song we always sang in elementary - "Mama Paquita," but I just looked it up, and apparently it's Brazilian. 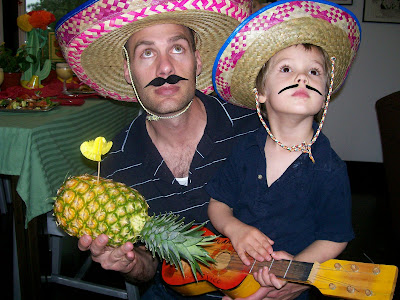 It may look like I photoshopped in those moustaches, but they were really wearing them. And that's also Ryan's real chest hair, heehee. :) These two had a little too much fun posing for me. 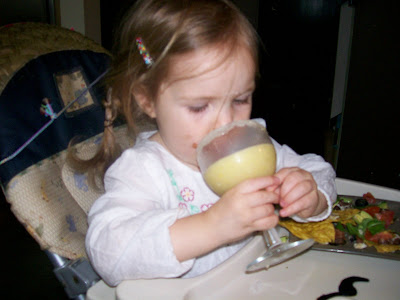 Mi senorita bonita even insisted on wearing a moustache, but she took if off to down her pineapple margarita. (I used Santa Cruz pineapple coconut juice mixed with frozen pineapple, and it was one of the best smoothies we've had in awhile.) 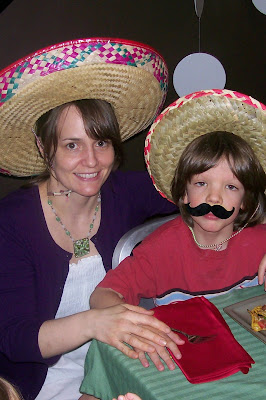 I think the moustache was having a sobering effect on Tornado because Ryan took about five pictures of us, and he couldn't quite get a good one. 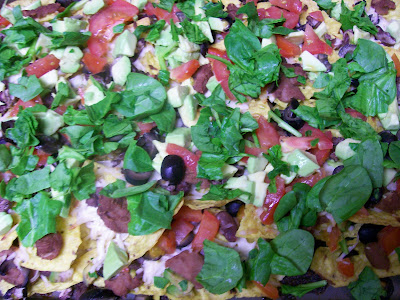 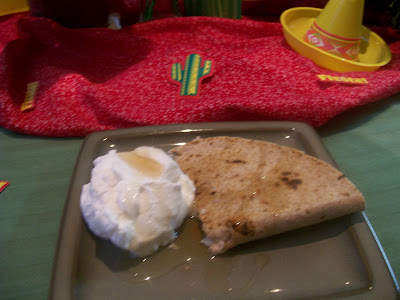 For dessert, I veganized this recipe for banana quesadillas. (And I added chopped bananas inside because it seemed to make it healthier.) It was good; everyone polished theirs off - especially Dash, in record speed. I wished I would have waited to serve them until they were cool because I think they tasted better after they had sat for awhile. That's what I would do next time.
Posted by Jenny at 2:33 PM