Note: This was my New Year's Resolution post, January 2010, on my other blog.
I'm reposting an edited version of it over here, as I am constructing this blog.
One of my New Year's Resolutions was to start eating more fruits and vegetables. Like REALLY start eating MORE. (To get healthy and to help me lose 15 lb.) I know I probably eat more (fruits and veggies, that is) than the average person (since everything I eat has to come from the ground), but honestly, it takes some work for me. If left to my own taste buds, I could survive on cold cereal and sandwiches. Top it off with a handful of chocolate chips. It's not that I don't want to eat more fruits and vegetables. I really do like them. I absolutely love a good salad or a good smoothie. There are many hindrances, though, like:
1) I'm a lazy cook.
and
2) I don't like going to the grocery store. (Once I'm AT the grocery store, I like it; I just don't like GOING. Because I'm also a lazy driver.)

Fortunately, I do have the natural desire for my family and me to be as healthy as possible. And if I read (and then research) about something that ISN'T good for me, that's all it takes. I don't want it anymore. The thought of eating something artificial or with trans fat, etc. sounds gross to me. I'm not tempted in the least.
Although it does have it's problems (socially, I can imagine I'm not the most fun person to hang out with, ha), I'm relieved I am OCD about food. Because if I wasn't, I don't know what would prevent me from stopping through Burger King like every day to get fries. And I have enough trouble losing weight the way it is. I'm just saying, I KNOW it's hard - all of it...losing weight, eating well (but we need to do it anyway!). I'm going to be trying my best. 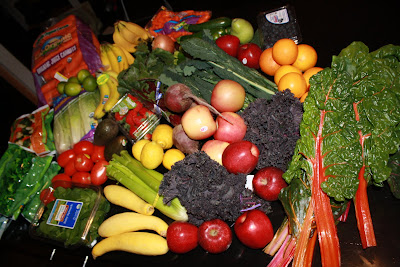 This was our stash from Whole Foods last Saturday. Doesn't it just look beautiful? We bought much less processed/boxed food this time. I have a very bad habit of buying produce and letting it get buried and rotten in my fridge because I'm tired at night and reach for frozen Amy's burgers instead. I'm proud to say we ate almost all of it this week (and what little remained - juicing carrots, a couple of limes, etc. - is still fresh). One of the things that really helped was spreading it all out like this to dry (to keep the fridge stuff from going in wet and molding). 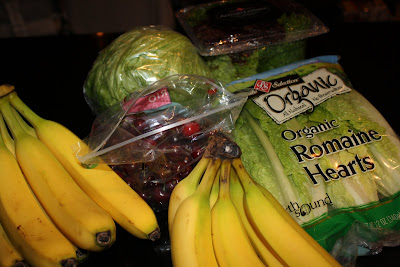 We even had to go back to the store several times throughout the week for more fruits and veggies. 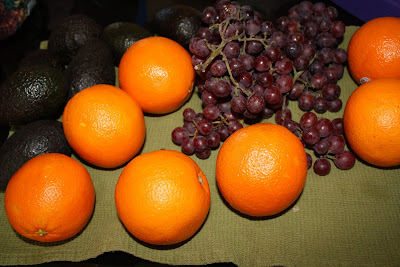 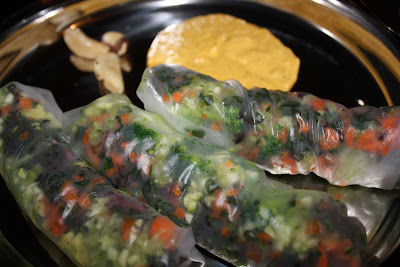 We've been having lots of smoothies and salads, and we've also made "spring rolls" using rice paper wrappers. If you have never worked with these, they're really cool.
They are hard like a chip and have to be soaked in water for about 20 seconds. Then just fill it with veggies (we used raw swiss chard, celery, broccoli, carrots, and avocado...and I chopped everything in the food processor ahead of time hoping it would make it easier to chew for the kids) and roll it up. The wrapper sticks together. It's such an amazing texture.
Dash, at first, asked if it was food, which is funny and totally logical. They're just like rice noodles, though, if you've ever had those. Totally plain and nothing weird (ingredients: rice flour, tapioca flour starch, salt, water). These can also be fried, if you prefer, but we haven't tried that yet.
On the side: Kristen's Cheezy Hemp Sauce, which I've mentioned before that we love. Also: brazil nuts, which are high in selenium and good for your prostate.
Those of you who have one of those.
The kids like it when I tell him why a food is good for you. I guess I must have told Dash once that brazil nuts are good for your prostate and had to explain what a prostate is, because he announced at dinner, "Daddy, Brazil nuts are good for your privates." 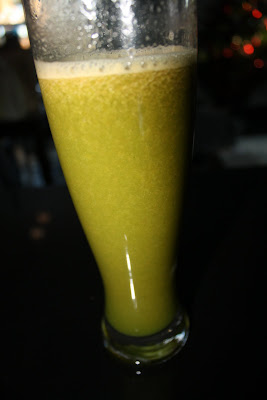 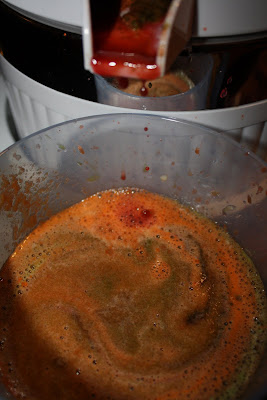 Fresh juice just smells so ALIVE. (NOT like dirt or whatever it is my Mom says it smells like. update: She says that isn't juice altogether that smells like dirt; it's only beet juice.)
We had QUITE a bit of excitement this week with the arrival of our new Blendtec blender.
Posted by Jenny at 6:53 PM