Vegan MoFo continues...here are a couple of meals we've had lately...(and, incidentally, here is an article I just noticed on MSN: Meatless Meals: The Benefits of Eating Less Meat) 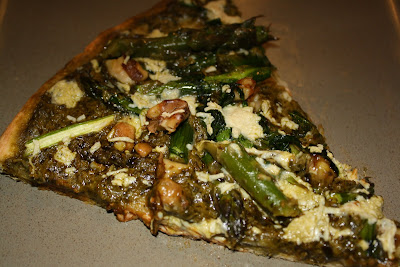 Saturday, I made a typical pizza like this one...and then I experimented, making pesto pizza. I spread Meditalia basil/pine nut pesto over the crust and topped that with spinach, zucchini, walnuts, asparagus, and little Daiya cheese. Next time, I would only add the asparagus partway through the baking process; it got more done than I would have liked. But it was delicious.
Ryan and I both declared this to be a meal worth repeating often. I discovered that Tornado LOVES raw asparagus. I, honestly, would have never thought of eating asparagus raw. He ate so many stalks it prompted me to google whether it was okay to eat so much raw asparagus. I wish I had Tornado's palate. He seriously eats healthier than I do. 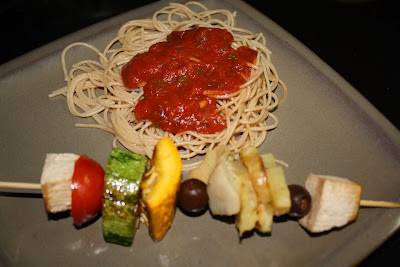 Spaghetti with kabobs...I just grilled a bunch of pineapple, artichoke hearts, tofu, and zucchini and squash from my dad's garden and set it out on the counter with some olives and cherry tomatoes and let the kids make their own kabobs. They went back for multiple skewer refills. 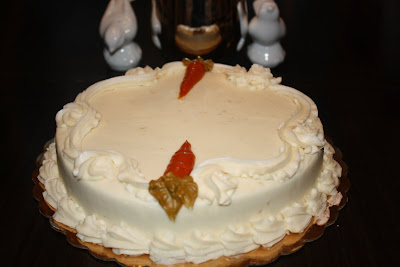 See, I told you my momma was a vegan softie.
She surprised us this weekend with a carrot cake she bought at Whole Foods.
Thanks again, Mom!
Here is a list of all the Vegan MoFo participants.
Posted by Jenny at 12:46 PM