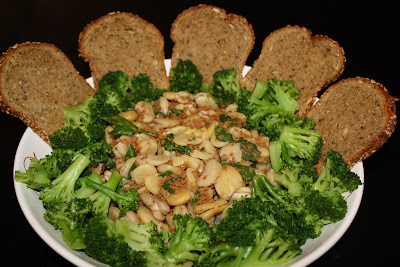 I've always wanted to try fava beans. (Maybe I've tried them before, but I don't remember if I have.) I always see them in recipes, and as a lover of all beans, thought they sounded delicious...I was disappointed. They had a strong taste to me. Ryan thought they tasted just fine to him, and Tornado devoured his. Which makes sense because I thought they kind of tasted like brussel sprouts, and Ryan and Tornado love brussel sprouts.
(Yes, honey, I know you think you're a "better" vegetarian than me...this is a little joking debate of ours...he thinks he's the healthier vegetarian, and he does make some very good points.)
Maybe they tasted like canned green beans (really firm canned green beans). Two tastes I'm not in love with. (I will eat brussel sprouts anytime, though, because they're good for me...and green beans cooked from fresh or frozen...NOT canned, yeek.) For the record, Ryan does not agree that they tasted like either of those two things. He said it was hard for him to tell, though, because he didn't taste them before I added the other things to it.
Anyway, I had drizzled a little olive oil, vinegar, lemon juice, and garlic salt on them to jazz them up. And I put some fresh spinach in the colander while I was draining them, to steam it a little, then sprinkled some Organic Bac'uns on top. They were fine; I ate them. Sissy and Dash weren't big fans. Sissy ate some, though, and I talked Dash into eating about 7 of them (they are pretty big beans). Maybe I would like fava beans better fresh, when they're still green in color. I will, for sure, give them another chance.
And of course, we had steamed broccoli and garlic toast made from Men's Bread. There are 15 grams of protein in 2 slices of this bread. (There's such a thing as Women's Bread, too. We eat both and don't discriminate.) These breads are made by French Meadow Bakery, which seems to be our favorite brand of bread. This is the bread we eat the most often - Flax & Sunflower Seed bread...