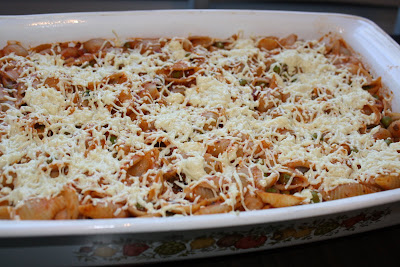 This dish is dedicated to my Momma. When we were young and she would have to leave for work on a summer day or whenever we were going to be alone, this was a dish she often left for us in the fridge. (Probably often in this same casserole dish I've inherited.) We just had to stick it in the oven. Pasta, peas, sauce, and cheese melted on top. It's just as good now. 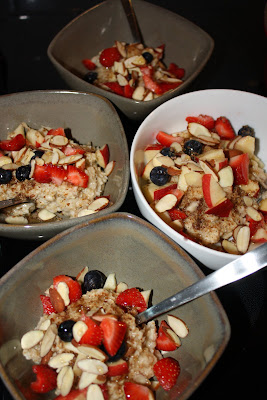 Oatmeal with almonds, flax, agave, and berries. I'm REALLY trying to eat more oatmeal. As opposed to...ahem...Panda Puff's or something like that. (When I do eat Panda Puffs, I try to, at least, add some almond slices.) And breakfasts these days have been eaten on the car, on the run (for the kids, usually apple slices, toast, granola bar, or bag of nuts). 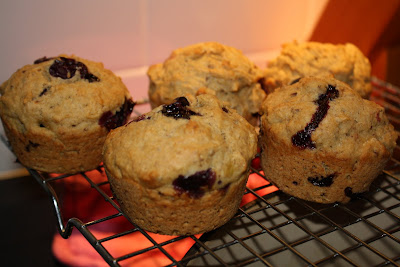 I made these Blueberry Banana Muffins from a recipe I got out of either How it All Vegan or Veganomicon...I can't remember which. I was scribbling some recipes down quickly, while in the library parking lot before I left those books in the drop-off. Those are both great books, though. I just need to purchase them. I'm pretty certain it was my fault they didn't turn out they way I'm sure they were intended. I think I was missing a liquid ingredient because the batter was really dry. They seemed more like scones than muffins.
Regardless, they were eaten, and the key to this story is: I don't know why I don't make muffins more often. They're always a sure-fire hit around here. 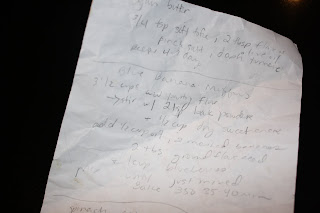 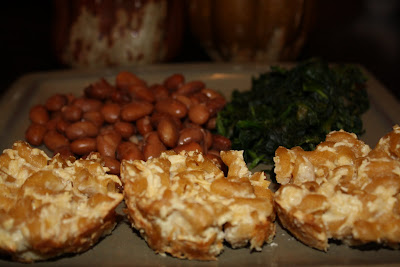 I attempted this recipe for the Mac 'n Cheese Bites that I've really been wanting to try from Vegan Mom. Here is the recipe. Hers look a lot prettier than mine.
I started making it then realized I was out of key ingredients. I tried to "make do." I was out of soymilk, onions, and Earth Balance. Pretty substantial ingredients. I should have just waited. I used water, tahini, and cream cheese. Haha. I was also out of cooking spray so I just oiled the muffin tins with my Spectrum Organic Shortening. It actually turned out really tasty, despite the fact they were stuck to the pain without the Earth Balance and spray. (I made 12 "muffins" and 12 "loafs," and there was nothing left. They were scraping at the pans to get everything they could because they all liked them so much.)
I look forward to trying this recipe again as it was intended, with all the proper ingredients.
I think they're a great idea, regardless.
Posted by Jenny at 7:00 PM