Blogging hiatus is hopefully over for a bit. Had to have some time to get accustomed to our new schedule of activities. Also, I put myself on the Eat to Live diet for 2 weeks, and it was just too tempting, looking at all of your yummy meals. :) I have the afternoon free, though, and I plan to relax on my bed for a bit and do a little blog reading. 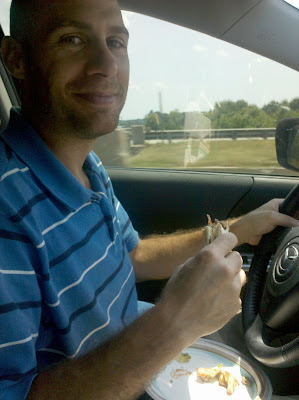 Early last month, my groom and I got to spend about 24 hours alone together to celebrate our THIRTEENTH anniversary. We decided to go to Dallas again because it's one of the closest big cities to us. 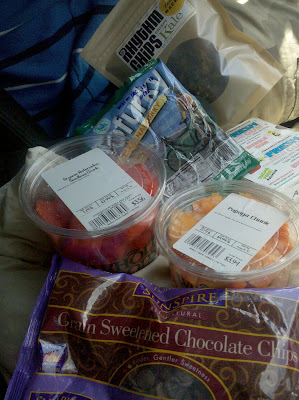 I packed a veggie burger for him and a Caesar salad for me to eat on the way. We also stopped at Whole Foods on the way out to pick up some car snacks. We chose: chocolate chips, watermelon, papaya chunks, Tofurky Jerky, Kale Chips, and B-Fresh Gum (which I always buy in a 10 pack to get the 10% case discount). 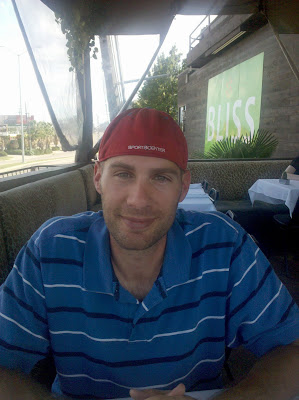 We drove straight to Bliss, a raw cafe we had never tried. It is a tiny place (but has more of an elegant feel to it). All of the seating is open-air, and I have to admit the temperature was definitely warmer than I'd prefer it to be while I'm eating. I liked it a lot, though, and I look forward to eating there again! 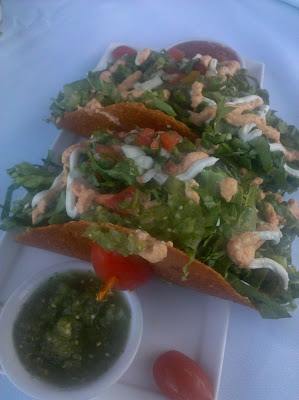 I ordered the Cowboy "Rawko" Tacos because that's just what I'd generally be drawn to on the menu, and I'd seen Amber Shea's (from Almost Vegan) post about them. Ryan and I each ate a taco, and we definitely liked them a lot. We felt very light and healthy, eating them.

I have to admit, Ryan was pretty bummed that I wanted to go to a raw restaurant, rather than Spiral Diner. It was definitely a tough call, but I knew we needed a new experience. Ultimately, we realized Spiral Diner is closed, anyway, on Monday's so that made it easier for him. He was glad we tried Bliss, though; he was impressed. 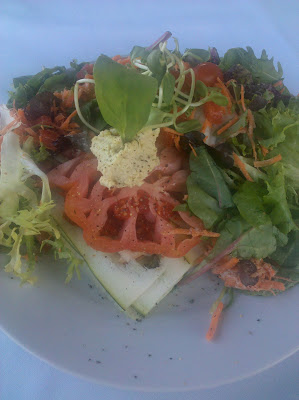 We also split the Rawsagna. (I'm a big, cheesey fan of cute, clever food names, by the way.) The lasagna was always delicious and very healthy-tasting. I think I preferred the lasagna, and Ryan preferred the tacos. 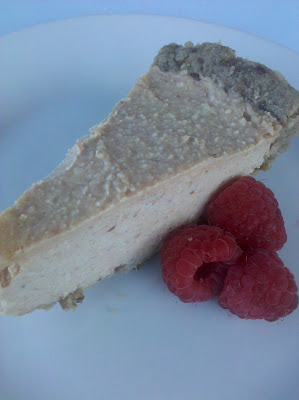 As we were looking over the menu, the waiter instructed us to "save room for their cheesecake," (what a mean thing to do, as you will soon discover) which is supposedly amazing and just like "real" cheesecake. Sign me up. Weeeell...when we were finished with our meal, we asked for slices of cheesecake. He told us they just sold the last piece! We did order this dessert to share - I forget what it was - a torte maybe? It tasted good, softer like a pudding.

We checked into our hotel, which was the Holiday Inn Market Center. It was great; I highly recommend because they were so helpful. We were able to park our car, and the shuttle van dropped us off at our next destination - 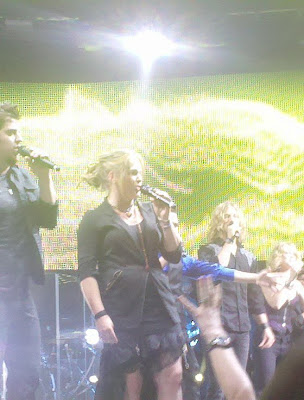 which was the American Idol concert. We thought it would be something fun and lighthearted to do together. This was actually the first season of the show either of us had ever watched. I never thought it was something I'd be interested in, but we really got into it, voting and everything. It was bonding time together after the kids went to bed. 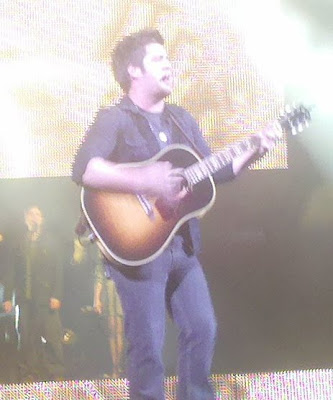 Ryan got into it especially because he loved Lee DeWyze (the eventual winner), who is from his home state of Illinois. 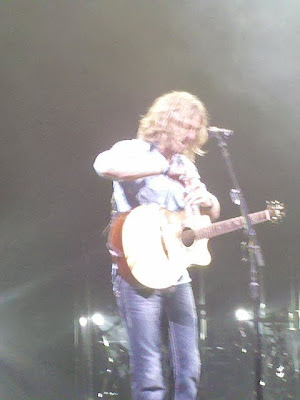 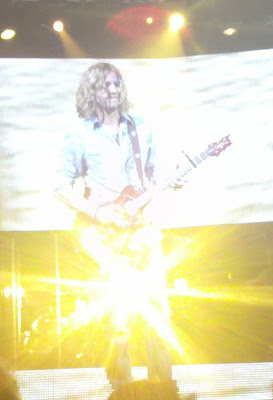 It's as if the Heavens parted... 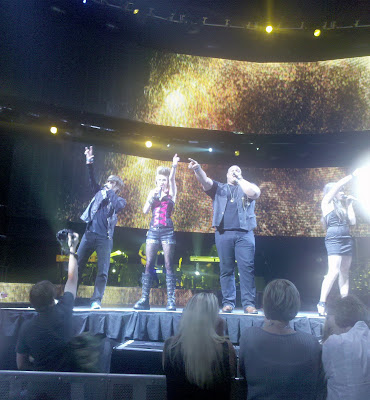 We were on the 4th row center. We really enjoyed the concert. We even enjoyed the contestants who weren't our favorites on the show.
The hotel shuttle came back to pick us up, even later than they generally run, which was so nice of them. When the driver found out it was our anniversary, he was very congratulatory and told us to go into the hotel lounge and order a drink on the house. I love nice people! I got a glass of orange juice. Which isn't what they had in mind, I'm sure, but I really like orange juice!
The next morning, we planned on stopping at a big Whole Foods I wanted to investigate. Ryan was a little like, "It probably wouldn't take any longer to stop at Spiral Diner... ." He really wanted to go. I'm so happy I have a husband who is just as excited to visit a vegan restaurant as I am! 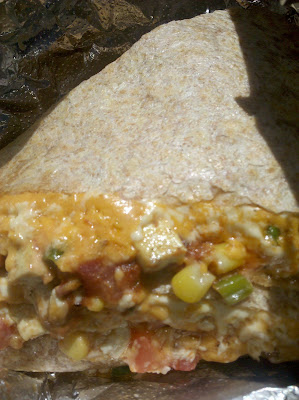 I'm embarrassed to even say everything we got. Something comes over me when I'm faced with a menu with limitless options. I lose control a little bit. A lot.
Anyway, we took our food to eat on the road. We had the Chipotle Tempeh Quesadillas as an appetizer (Yeah - it's totally not meant to be an appetizer; it would be better served as a MEAL for two). Incidentally, I noticed there was a recipe for these quesadillas in the latest VegNews.
It was so filling - and decadent and delicious, and yet...we were laughing at ourselves because it was all sort of...disgusting. It was just that we were trying to eat it in the car. And I forgot to get napkins! Oil was dripping from us, and we felt like we were sweating because it was so spicy. The whole napkin situation was horrible. I did find a couple of tiny, flimsy napkins in the glove compartment, but they were no match for the oily Daiya quesadillas. It was one of those "you had to have been there" moments. Ryan got sort of quiet after he ate. His hand was off to the side, just curled up there, still covered in food for the longest time. I asked him (with a repulsed face) if he was okay.
He said, "I'm just still in shock over that quesadilla."
But did we stop eating? Nooo. 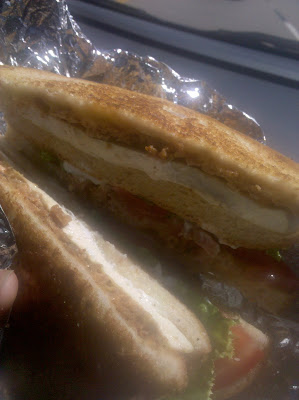 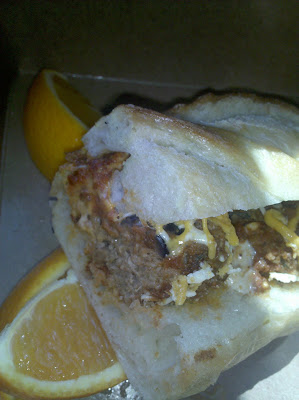 Meatball sub - mmmmm!!! I always pick the fruit as the side, as if that will somehow make up for my glutony.
I DID order several desserts, BUT it was more with the intention of taking them home for the kids. We just took sample bites of everything, then saved the rest in the cooler for them. 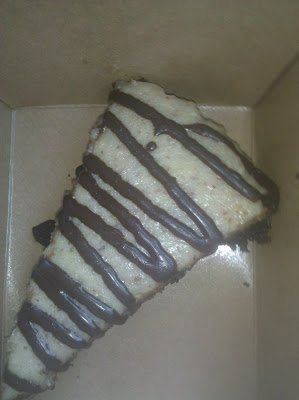 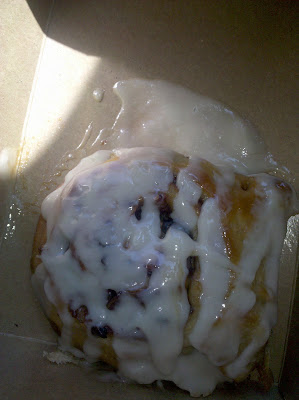 I always go for the cinnamon roll, if it's ever an option. I love them, and I never get to eat them. I can't remember if I have ever made them, but I probably only get to eat one or two cinnamon rolls a year, if that. 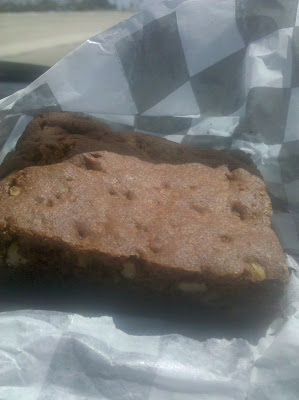 The brownies were good. Soft in a way vegan brownies aren't always. 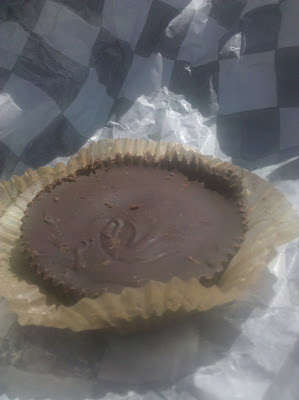 Peanut butter cup was good - probably no better than the ones I make at home.

So...what I've failed to mention is that I had also ordered nachos and a taco salad. I just sort of had it in my head that we'd still be on the road at suppertime, and of course, we'd be hungry again. I hate not having anything to eat when I'm traveling. To be clear - I was NOT hungry again. I didn't even eat supper. I think Ryan and Tornado ate the rest of the food for supper that night.

Have a good day - more about my Eat to Live diet later this week. I've lost 4 pounds so far. I feel like it's necessary to say that after my narrative above.
Posted by Jenny at 11:36 AM

Email ThisBlogThis!Share to TwitterShare to FacebookShare to Pinterest
Labels: My Husband, vegan Texas