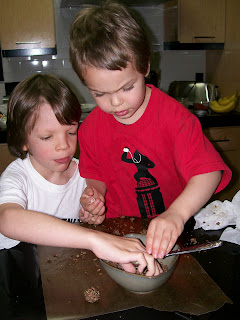 I love my new food processor. (And my new toaster and my new food dehydrator...I commented to Ryan that I sure was a lucky woman that my husband got me all these new appliances. He made some kind of crack like, "Don't take it as a hint or anything." haha)
The first recipe I tried (which I got from Green and Crunchy) was Earth Balls. They were so easy and tasty, too. The boys were rolling their own balls, and you can see there is only one sitting out because they were eating them as fast as they could make them. I am sure these are going to be a staple in our house. 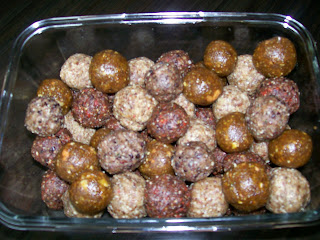 We made four different kinds. All of them started with 2 cups of nuts (we used cashews, walnuts, and almonds). Once we ground them to a fine meal, we added 1 1/2 cups of pitted dates (one at a time as the food processor was running).
The first batch we also added raw cacao nibs and hemp seeds. The next batch we also added goji berries to the nibs and seeds. Next, it was just nuts, dates, and ground flax seeds. Finally, we tried adding carrots. I didn't anticipate how moist that would make them, and I had to go back and add more seeds and nuts (which I wouldn't recommend adding un-ground because they wouldn't ground up very well at the end.) They were yummy, though, and tasted like carrot cake. 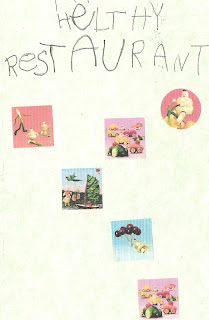 Tornado has been asking recently if he could be in charge of a meal. They love playing restaurant, but I am usually the "waiter." He wanted a turn at being the waiter, and I thought this would be the perfect day to do it - plus it's a great "school" activity. We had also been practicing with the new food dehydrator, and I thought it would be an easy meal for him to serve. He created this menu, which we photocopied. He wrote "(Tornado's) Helthy Restaurant" on the cover and decorated it with Fast Food (you know, the objects they create using fruits and veggies) stickers. 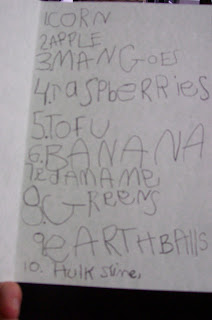 These were the ten menu items. We had dehydrated the first eight (plus peas and lima beans). I had made a batch of green smoothies and popsicles and mentioned to Tornado we needed to think of a name for them. He immediately replied, "Hulk Slime."
So...Hulk Slime it is. 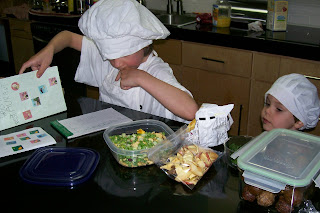 Dash was his assistant, and they were very darling about seating Ryan, Sissy, and me at the table and taking our orders. Tornado wrote down on his little notepad the numbers of what we ordered, then went to the counter and very carefully made our plates. 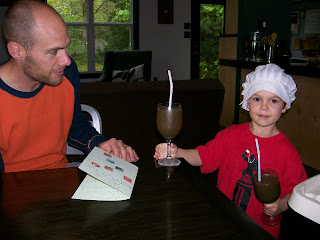 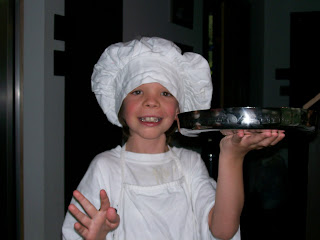 He was very adamant about carrying our plates on a tray, just like a real waiter. 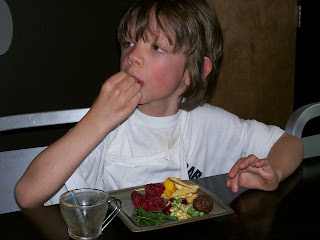 Finally, the hard little workers got to sit down and enjoy the meal for themselves.
Posted by Jenny at 2:43 PM