Last week, my husband was scheduled for a business trip in Dallas. He's had a lot of these types of trips this year (Arizona, California, Texas, North Carolina, etc.). We've had enough of his absence! He decided it would be great for us to go with him this time. He flew out one-way on Monday (so he could ride home with us at the end of the week), then Tuesday night, after the kids were finished with homeschool co-op, we made the 6 hour drive. He had meetings scheduled every day until suppertime (when he'd join us). But we found plenty to do while he was busy. Like eating. 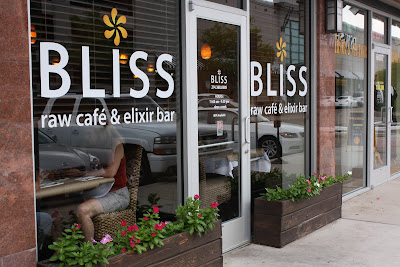 The first restaurant we hit up was Bliss, raw cafe & elixir bar in the University Park area. I was really looking forward to this one. Ryan and I had eaten at the other location (which is no longer open) last year for our anniversary. 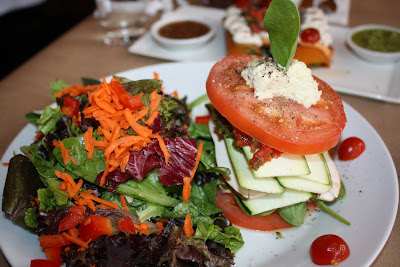 Rawsagna
slices of zucchini and tomato layered with basil pistachio pesto, sun dried tomato sauce, and pignoli ricotta cheeze
This was my 11 year old's choice. He laughed with glee when his plate was set before him. We liked the little green "flag" sticking out of the "cheese" on top. He's so funny and predictable; he always eats meals like this in layers. First, he ate the tomato with ricotta, then he ate the zucchini strips with sauce, then the mushrooms, etc. The salad appeared to be just a plain, ordinary salad, but it was delicious. I loved whatever dressing was on it. (Something creamy plus maybe some agave?) 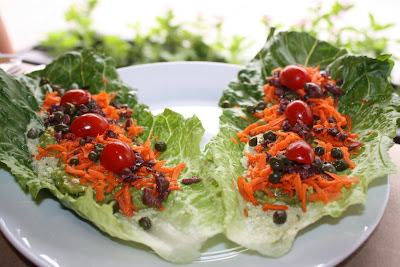 Greek Wrap
tahini hummus, guacamole, olives, carrots, chipotle hot drops, and capers
This is what my daughter ordered. Everything was just so good. It makes me want to eat raw and only raw every day. I mentally stored away plenty of ideas from the menu to eat at home. 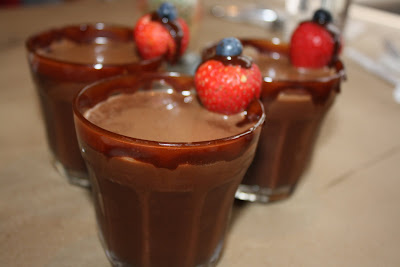 Chocolate Bliss
raw cacao superfood power blend, agave nectar, mixed tocotrienols, coconut, and cacao butter
The kids gasped with happiness when they saw these drinks arrive. They were soooo chocolate-y. I thought it tasted like straight chocolate syrup. My 6 year old said, "Oh, it's so chocolate-y, I can't take it!" But then he kept drinking it, of course. You can get shots of the different elixirs, which I would do, rather than try to drink a whole glass.
My 6 year old opted out of ordering anything else. He does eat plenty of raw food, but there was no food combination on the menu that sounded appealing to him. (He doesn't like avocado, tomatoes, or zucchini, which really puts a halt to things at a raw place.) He would have been more excited if I'd just picked up an apple, some baby carrots, and a bag of nuts from the grocery store. He ate a meal replacement bar I had in my purse. 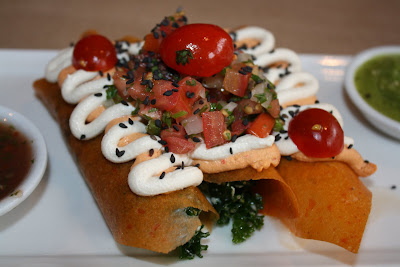 Coconut Kale Enchiladas
marinated kale with nacho cheeze, pico de gallo, tomatoes, black sesame seeds, and a "dash of cumin"
My meal. I could definitely eat this one every single day. I'm going to order some coconut wraps ASAP (or maaaybe try to make them). I have wanted to for awhile. This entree was on the small side, but I ended up eating half of my son's salad and half of one of my daughter's lettuce wraps, which made it perfect. 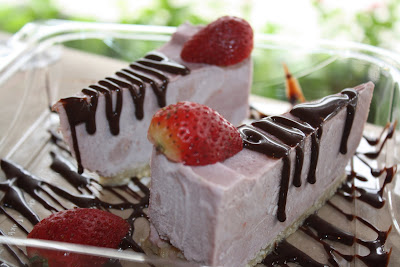 Strawberry Cheezecake
with chocolate sauce
We took our dessert to go. It was well received. It was partially frozen (less so by the time we got to our hotel). I don't know if it's supposed to be frozen, or if it was just brought out from the freezer. I like my desserts cold, but I would have liked this more if it didn't taste like icecream. But I think that's what my kids did like about it.
(The bill for the food above was...$78. My eyes popped out a little when I saw it...but it is what it is.)
A couple of days later, I called in an order for pick-up. My plan was to get something like nut butter sandwiches for the kids from an organic deli two doors down when I picked up my food. But by the time we got there, they were closed. Fortunately, there was also a Jamba Juice in the same shopping center, so they made do with smoothies and Clif bars plus more snacks back at the hotel.
My to-go meal: 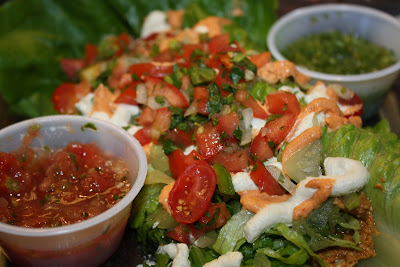 Amigo Wrap
chili spice beans, taco pate, guacamole, red onion rings, tomatoes, pico de gallo, lettuce, and cashew sour creme, served on a lettuce wrap
The sauces on the side were tasty but spicy, and I couldn't handle much more spiciness after my gazpacho (below). The wrap - there were actually two of them with one order - was delicious and inspiring to me to eat more taco lettuce wraps (with cashew creme and nacho cheeze) at home. I've also never made raw taco filling at home, which I need to do. 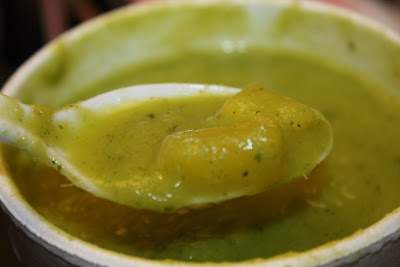 Pineapple Cucumber Gazpacho
Because I am a creature of habit when ordering at restaurants, I made myself pick one thing off the menu that I normally would not order. Uh, big mistake. There is not generally anything (vegan) that I can't eat, solely based on taste. I mean, I'm pretty (very) picky about ingredients, but as far as taste being the only factor, I wouldn't let something go to waste.
However, I couldn't get even half of this down. I was pouting as I forced down as many bites as I could. The pineapple cucumber combination was fine, but it's also blended with cilantro, olive oil, green onion, and cracked pepper. I didn't like the overall taste, and it was sooo spicy. Despite my determination to eat my $9 soup in spite of...I had to throw it out.
Our visit to Bliss last year
Posted by Jenny at 6:10 PM