We spent a few days last week in Perdido Key, Florida (which is part of Pensacola). We were going to drive halfway, then stop at a hotel because our 4 year old is becoming worse at sitting in the car for long periods. However, something came over Ryan, and he kept on going through the night. I don't know how he did it, but I'm glad he did because it gave us a whole extra half, at least, of a day to enjoy (and my kids soundly slept all night). 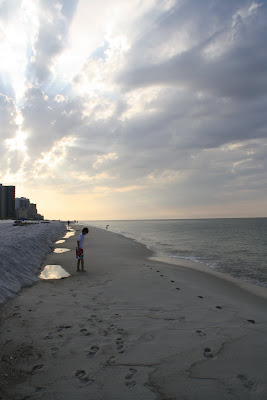 We arrived on the beach around 7 a.m. This was way too early for us to check into our condo. And we thought it was too early to call the other 13 members of my family in their condo. We just parked and walked along the beach until it was late enough to call. It was really beautiful on the beach that early. 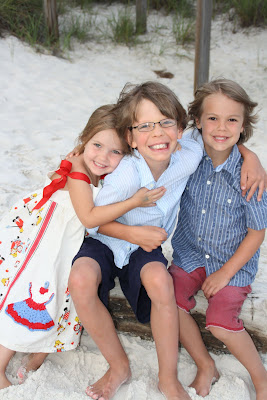 So, yes, we enjoyed our time relaxing and playing the rest of the week in the condo, at the beach, and by the pool. 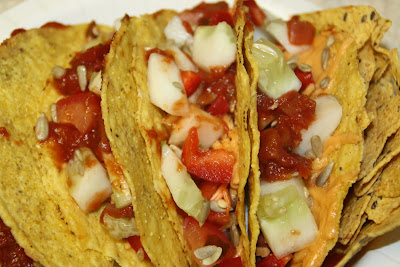 We had packed plenty of food, but we didn't end up making any big meals but one on our last night. We mostly ate nut butter, hummus, or baked tofu sandwiches. I ate a lot of tacos...because I love tacos. My toppings were a little random, though...avocado, canned Eden Foods beans, Daiya, tomatoes, Hail Merry sunflower seeds, salsa, romaine until I ran out, and (my dad's garden) chopped cucumbers, which were a pretty good substitute for lettuce. 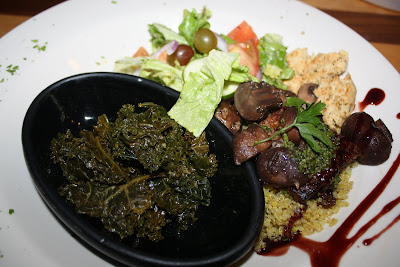 My vegan sister Tracy went with us into Pensacola one night to try out End of the Line Cafe. I was a little disappointed briefly because I had thought the online menu looked good and fun (sandwiches!) - but we found out they only serve one choice for dinner. I mean, one look at this, and what is there to complain about? I can't remember exactly what was served - greens, quinoa, mushrooms, salad, some type of bread...it was all tasty and looked fancier than the small, laid-back, un-fancy establishment would have suggested. This was also preceded by a course of flavorful potato-kale soup. 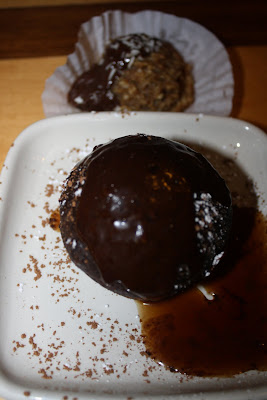 And followed up with this chocolate cupcake. I also ordered a couple of chocolate coconut truffles for the kids, hoping to ease my 6 year old's pain at having to be served cooked greens and mushrooms, etc. (My 11 year old bottomless pit finished off all of his courses, most of our desserts, and his brother and sister's shared plate.) 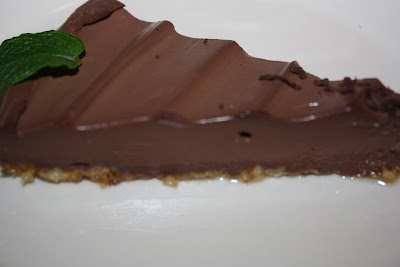 My son and sister also ordered pieces of chocolate mousse pie. The bite I took was delicious. 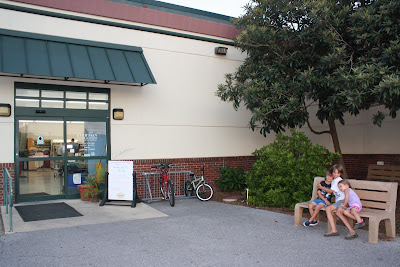 On the way home, we stopped at Ever'man Natural Foods to stock up on some essentials for the rest of the week and the drive home. I spent entirely too long because it's hard for me to jet in and out of a health food store. I have to search each aisle to see if there are any products I didn't know about. 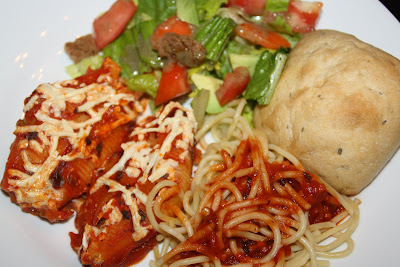 Our "big condo meal" (compliments of my mom and Tracy, etc.) occurred Friday night...for my BIRTHDAY! Salad with chia croutons and Annie's Organic Goddess Dressing, rolls, spaghetti, and sister-created stuffed shells. Those were the the most flavorful things I've eaten in a long time. She mixed the tofu with nutritional yeast, lemon juice, Daiya, fresh garlic, and other spices. So good. 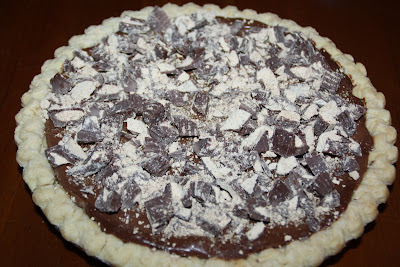 I made my own birthday pies (because I wanted to, not because no one else offered). I was just craving something very specific. I brought Wholly Wholesome pie crusts with us in the cooler. This one is chocolate mousse made with tofu, melted chocolate chips, vanilla, and a little organic sugar. I had this idea (and couldn't stop thinking about it until I did it!) to crush up several Justin's chocolate peanut butter cups on top. (My one wish is that their peanut butter in these cups was creamier - but I'm not complaining because I love those things. The weird thing is that a couple of times I've had one of their pb cups melt in the heat, then when it hardens back up, the peanut butter is VERY soft and creamy. I almost prefer to let them melt now!) 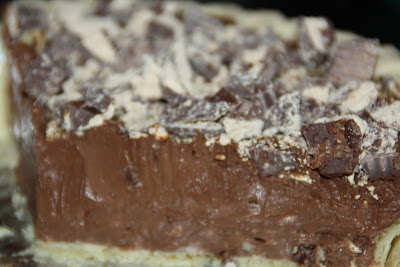 I loved it. Chocolate pie is probably my favorite dessert ever. 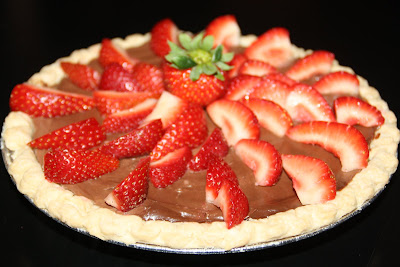 I also made a strawberry topped option. Also very yummy, if I do say so myself. I had a slice of each. 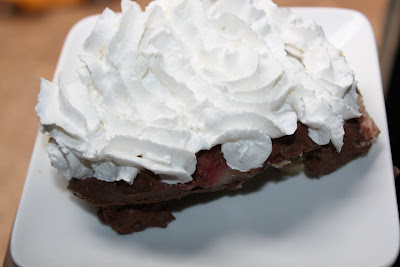 My leftover pie survived being smashed into the soft cooler on the ride home. I had a piece for breakfast the morning after we returned. I figured I needed to share because I hadn't yet gotten a picture with the whipped cream added.
*********************************
It was a nice treat after the day we'd had before. Our four cars hadn't left at the same time but were all headed in the same direction back to Arkansas and Missouri. The tire blew on the SUV my sister Cary was driving, with her husband and two kids. Their car flipped SEVERAL times from their lanes of traffic, ACROSS the big grassy median, then across the 2 lanes of oncoming traffic, and they ended up right-side up on the shoulder over there. My sister and brother-in-law were very sore with minor (if you call scratched eyeballs, concussions, scalped heads minor) yet painful injuries - but other than that, they are miraculously fine. (My sweet, precious 2 year old and 3 year old nephew and niece weren't injured.)
We were all just SICK as we tried to get to the ER to see them as soon as we could. I wrote more about the wreck, including pictures, on my family blog. We ended up getting home around 2:30 a.m. Pretty terrible end to such a fun week, but I can't say it ruined it because we have great memories. Obviously we all WISH (no one more than them obviously) it had never happened, but it's almost like you gain an extra amount of happiness because of the successful results. It is one of those times in life when you are reminded to just SOAK IT IN and appreciate and really value the time we have with ourselves and people we love. Because your tire can blow (literally or metaphorically) just like that.
Posted by Jenny at 9:26 AM