Continuing on - our February NYC trip: 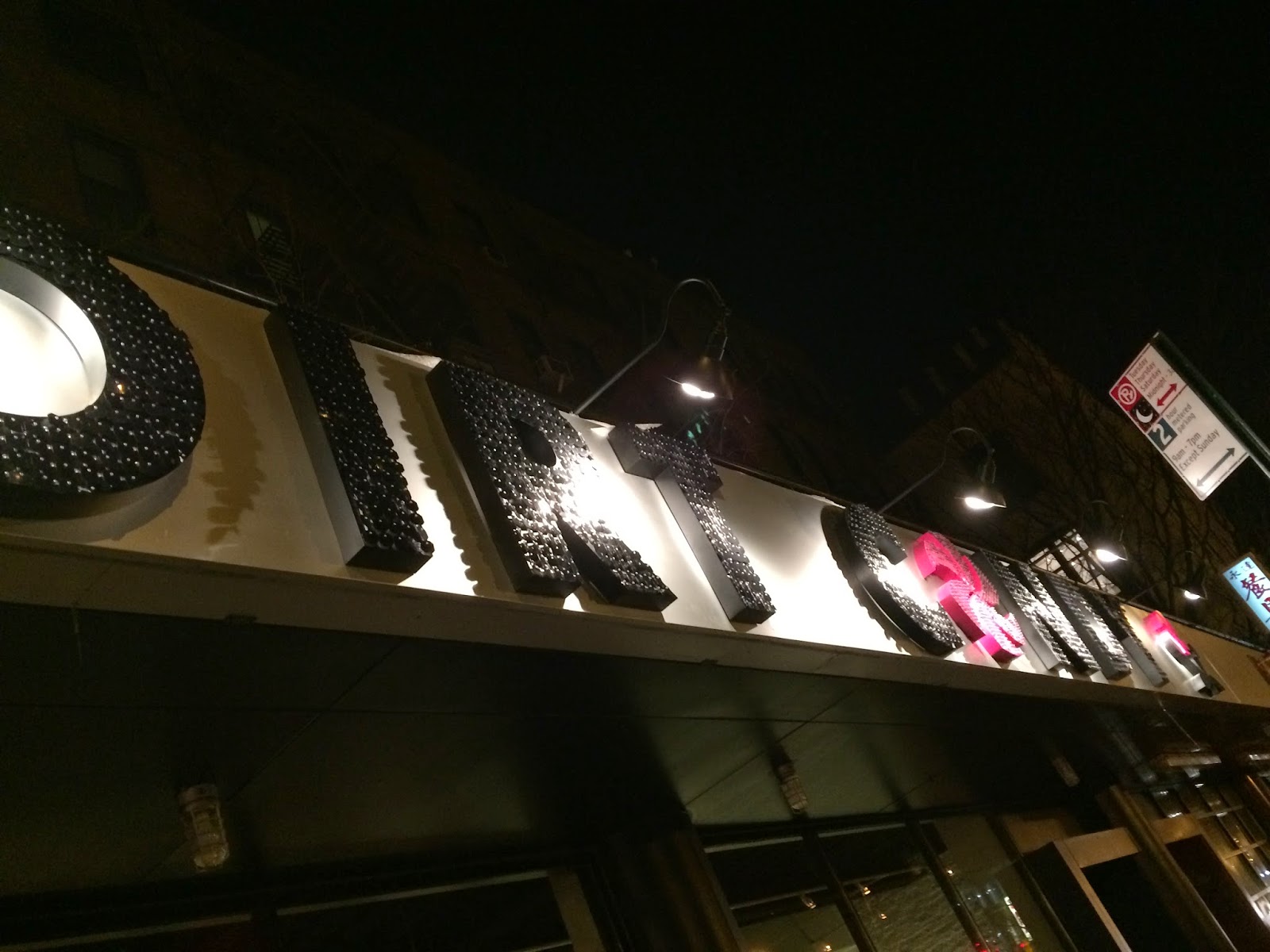 It's so difficult to cram everything into such a short trip that I made a probably unwise choice to take off for a new place very late that night (in the cold). It took longer than I had planned to find our way there, part walking/part subway/part taxi. My daughter fell asleep in the taxi, and I should have just turned around and called it a night. But I had been following the progress of the newer and bigger Dirt Candy (with owner/chef Amanda Cohen) on instagram for months and was so excited that it was opening the week of our trip. I didn't get a better photo of the exterior or interior of the restaurant, but it's all very pretty.
After our arduous journey to Dirt Candy, we walked in to the hostess apologetically telling us that they stop seating people at...about 15 minutes before we got there - maybe 10:15 or so. However, the owner came over and let us in which was fabulous and so appreciated. 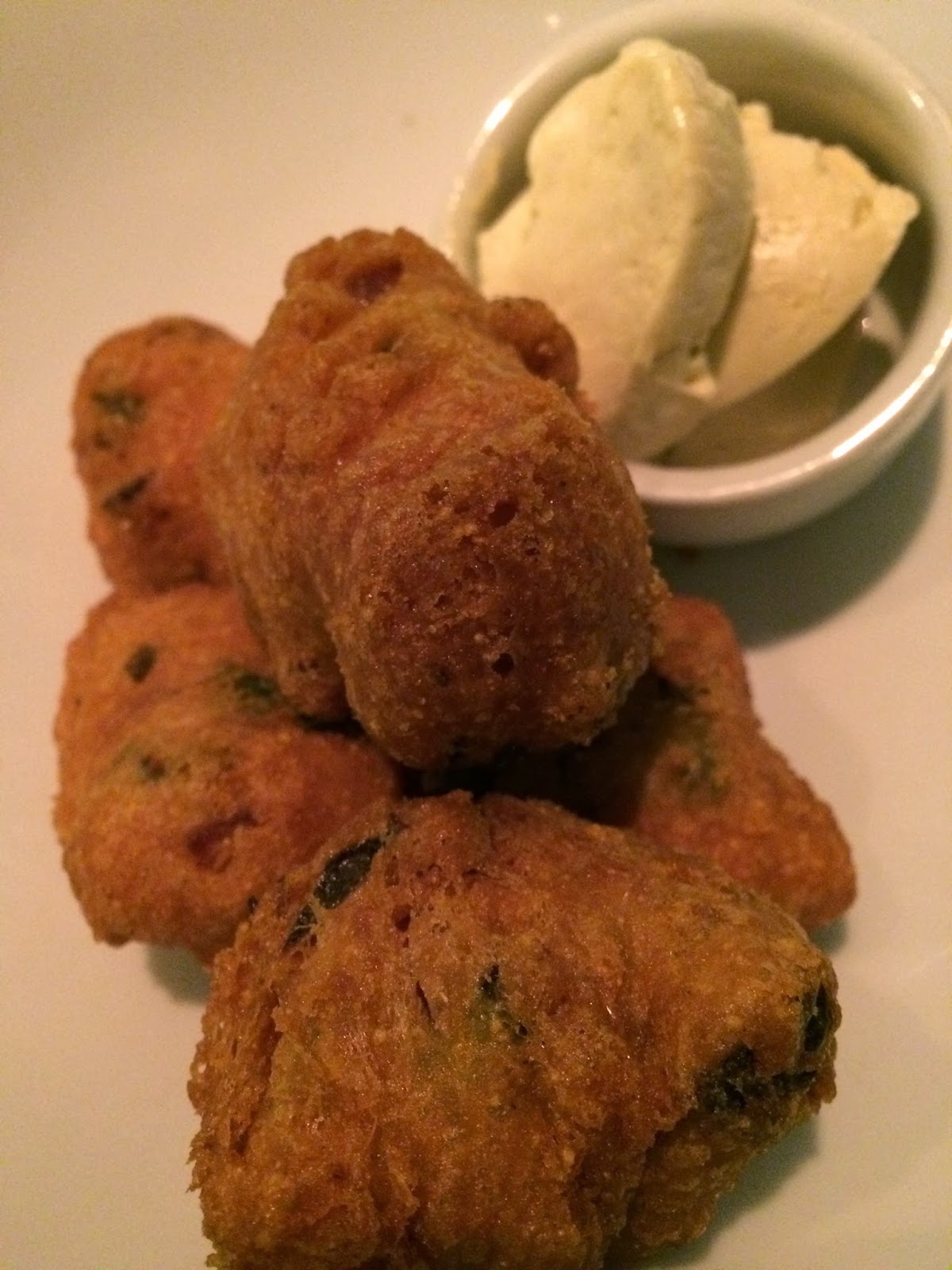 One menu item I'd always heard about that I knew I wanted to try were the jalapeno hushpuppies with maple butter. They were good. SO spicy that I had to start picking out some of the peppers. They were still so fresh inside that they were on fire. 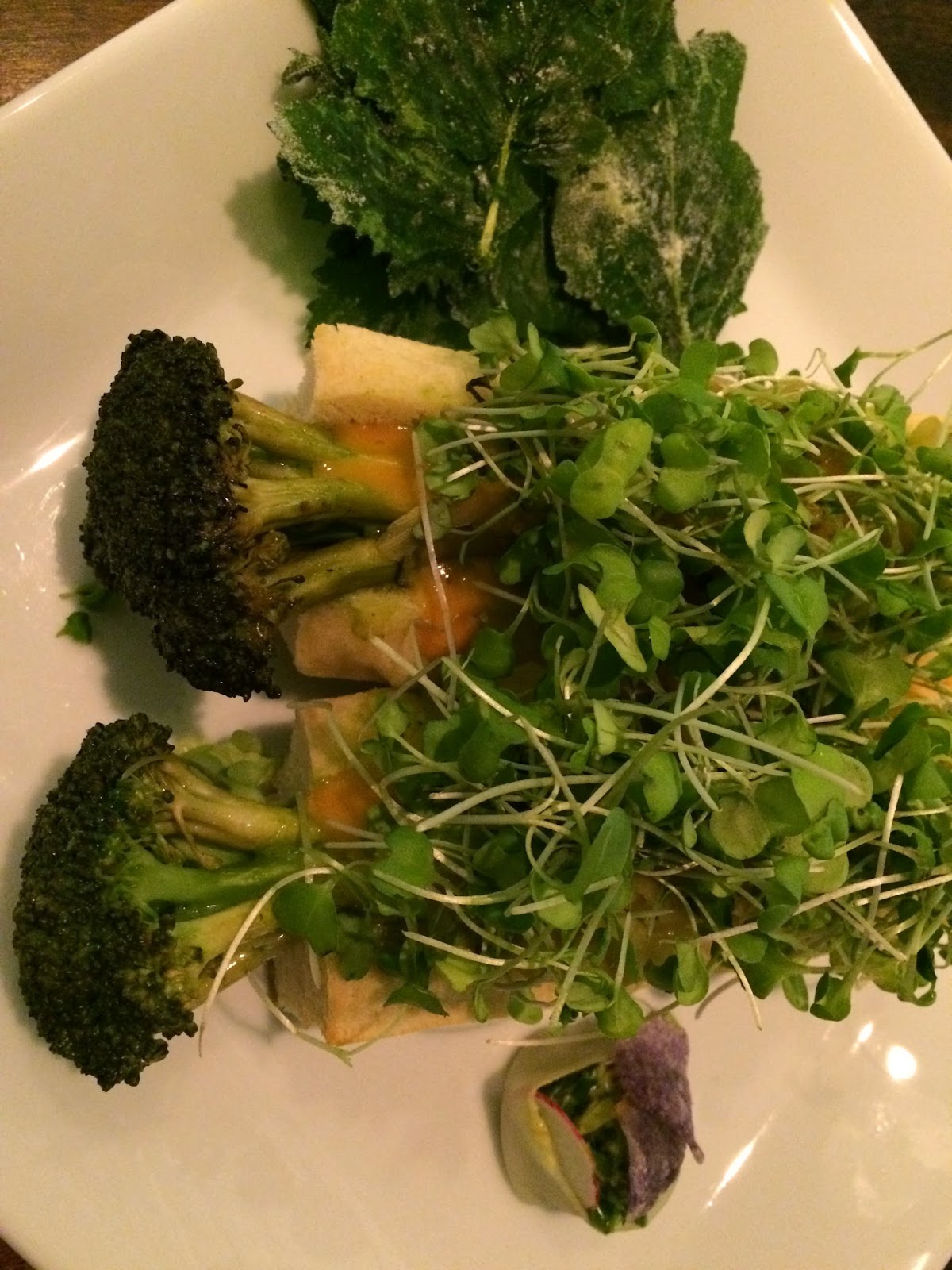 We shared the Broccoli Dogs. I love the concept of Dirt Candy, which is making delicious meals using vegetables, without relying on fake meat products. The "bun" was probably (?) gluten free - it seemed to be. 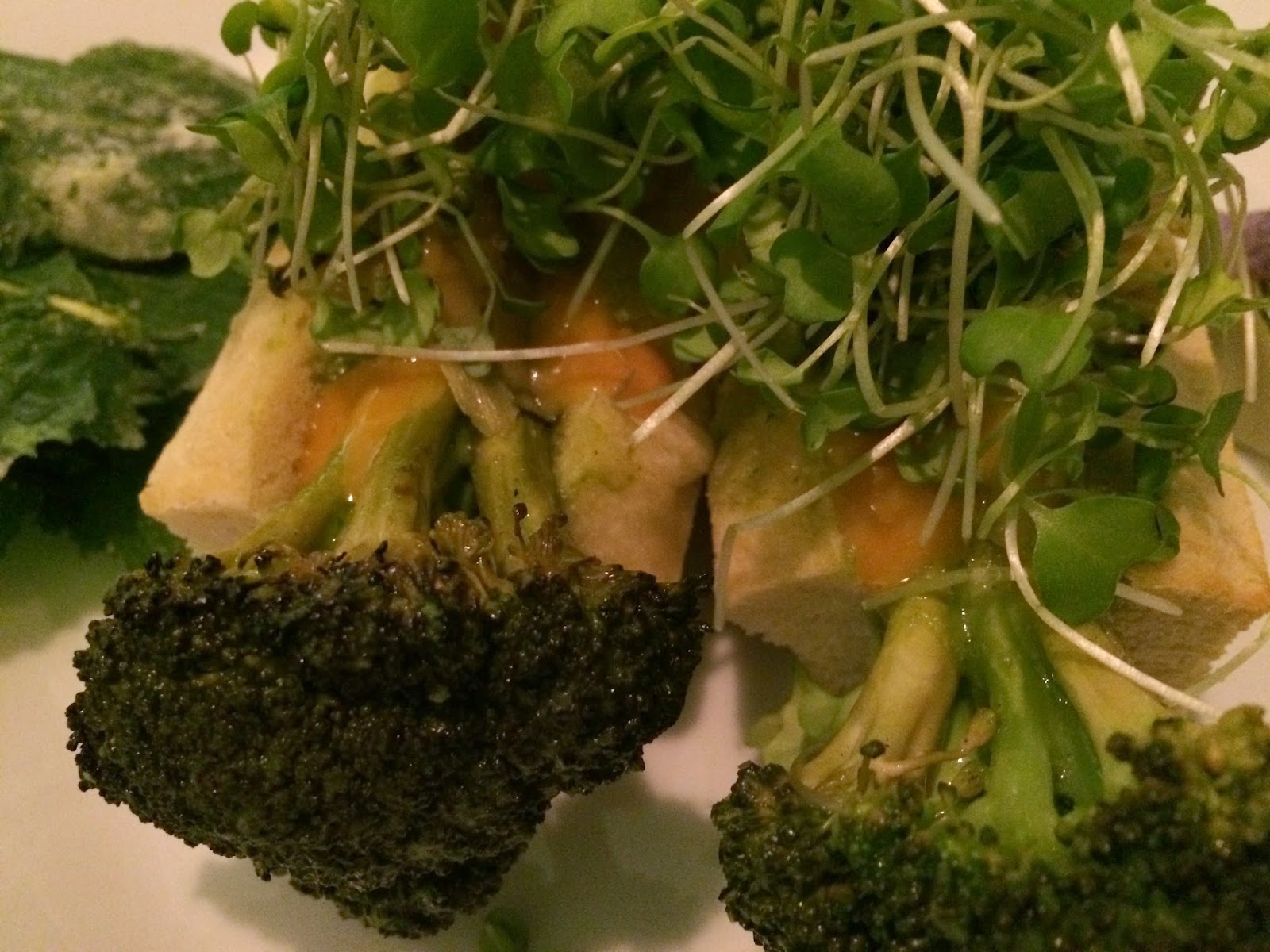 The "dogs" were the broccoli stalks, and it was all covered in broccoli kraut and a mustard sauce. Overall, it was good and a fun concept. The "chips" were crispy salt and vinegar broccoli rabe. 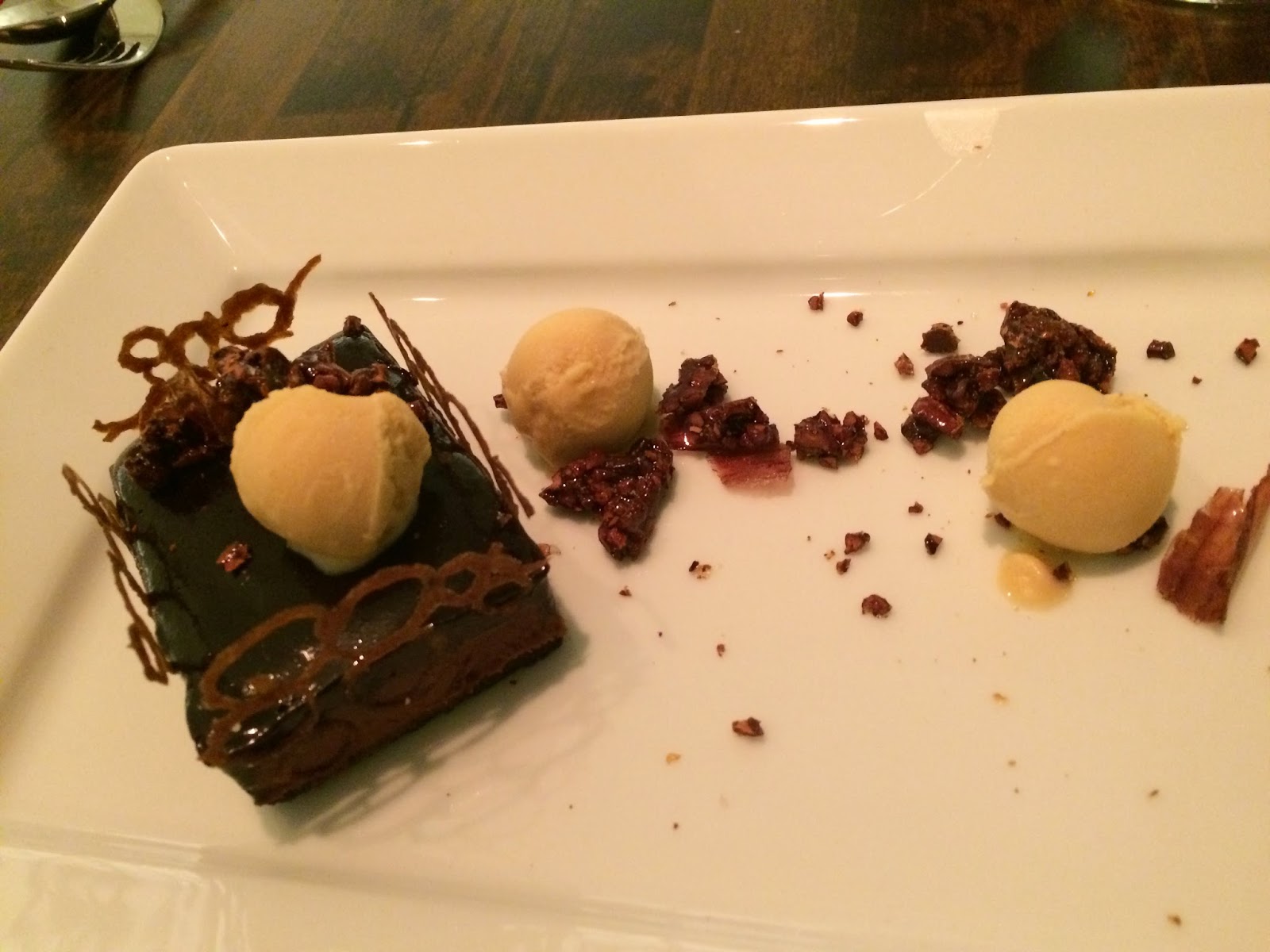 ﻿
We chose the Onion Chocolate Tart (with smoked almond ice cream) at the suggestion of the table next to ours. This might have been our favorite dining experience had it not been so late for my girl. We had great conversations with people on both sides of us. I don't know if that's how it always is there! It was interesting ordering a dessert with onion. I think the other dessert choice contained celery. Overall, I was impressed with the innovation of Dirt Candy and hope they do great! 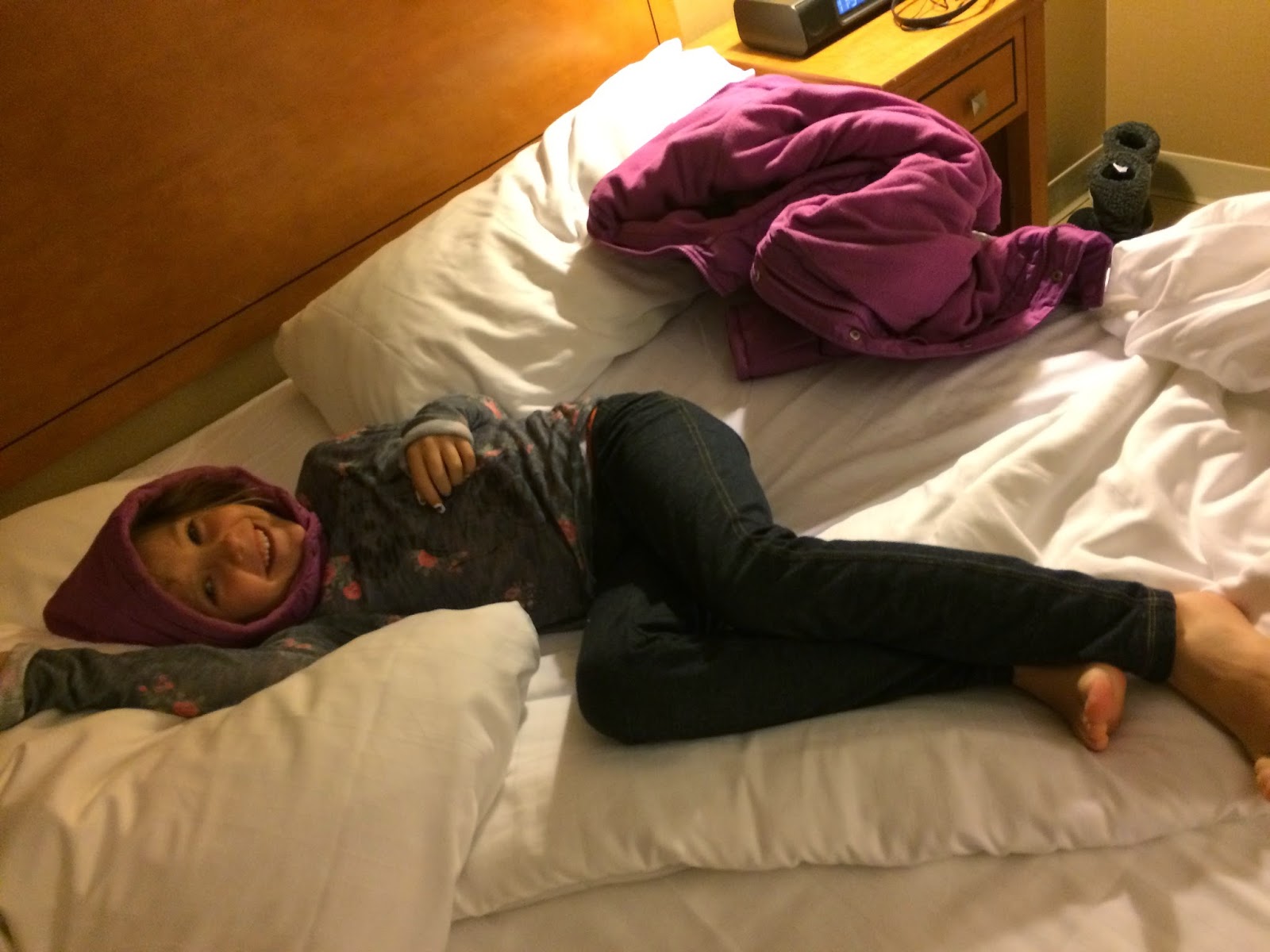 I'm including this photo because she was so exhausted by the time we made it back to our room. I told her to just get in bed, and I would do everything - brush her teeth, get her in her pj's, etc. I pulled at her coat, and it popped off the hood, and then we had a good laugh. 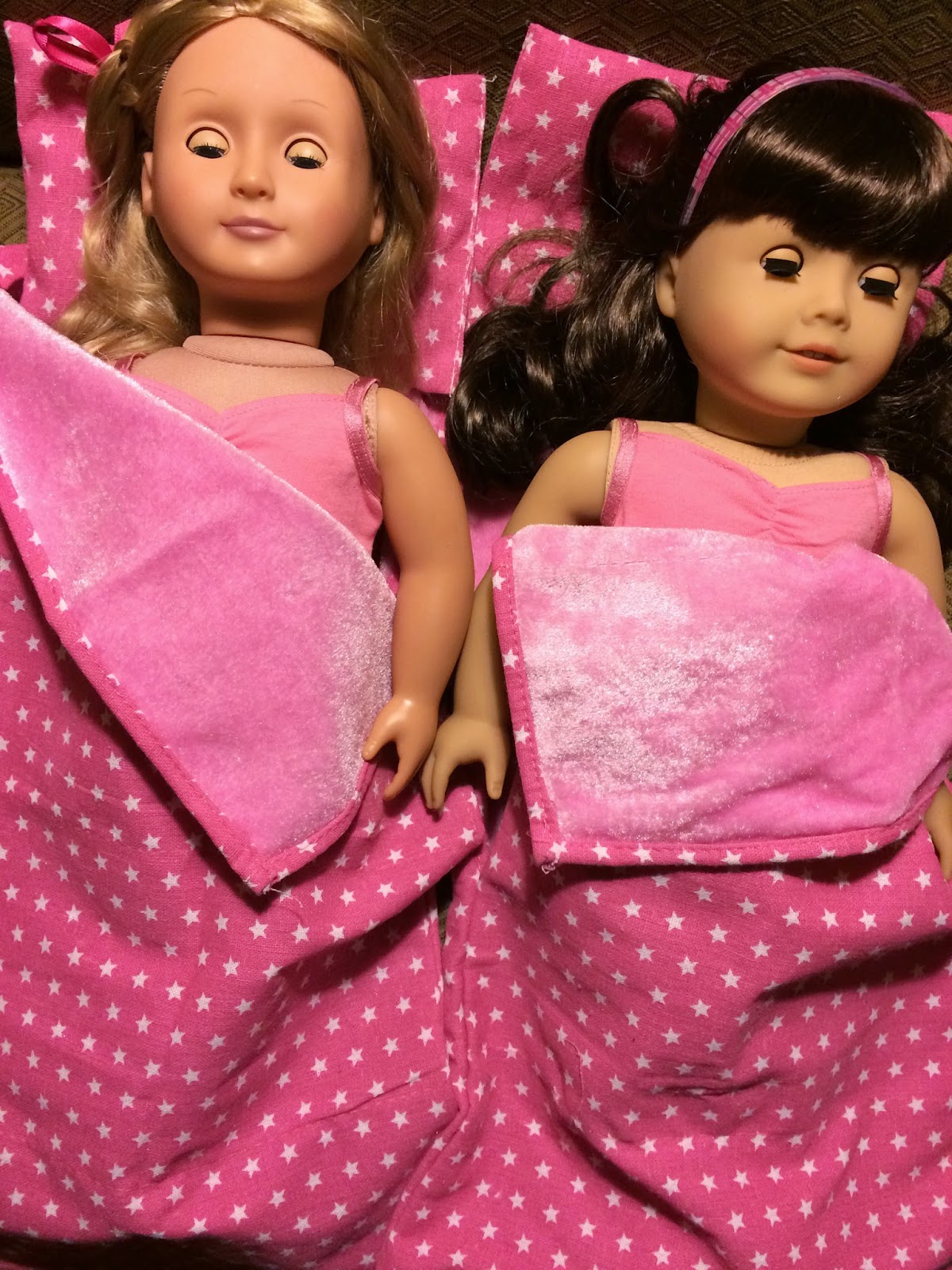 I also promised her I would tuck in Sadie and Samantha. 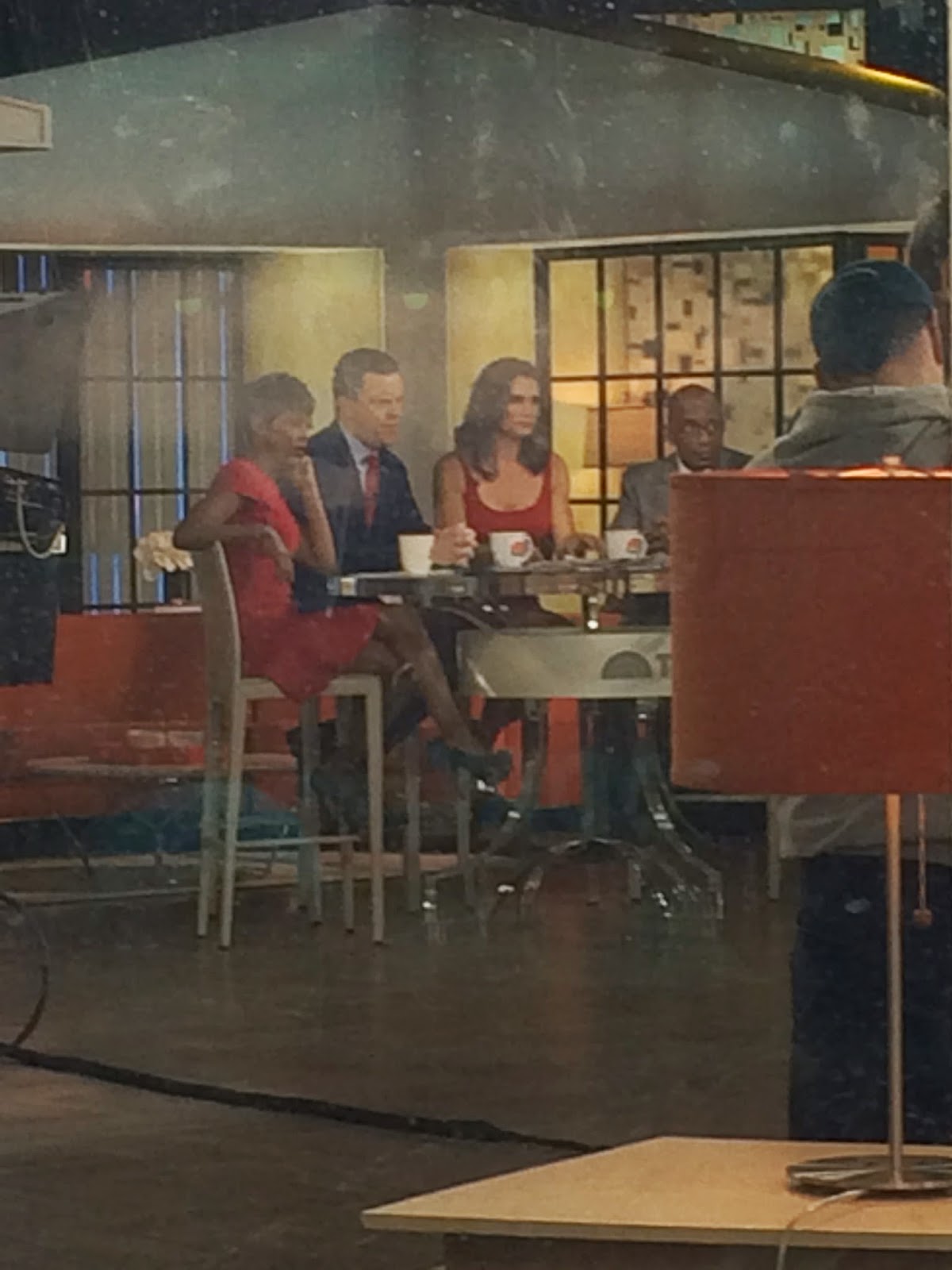 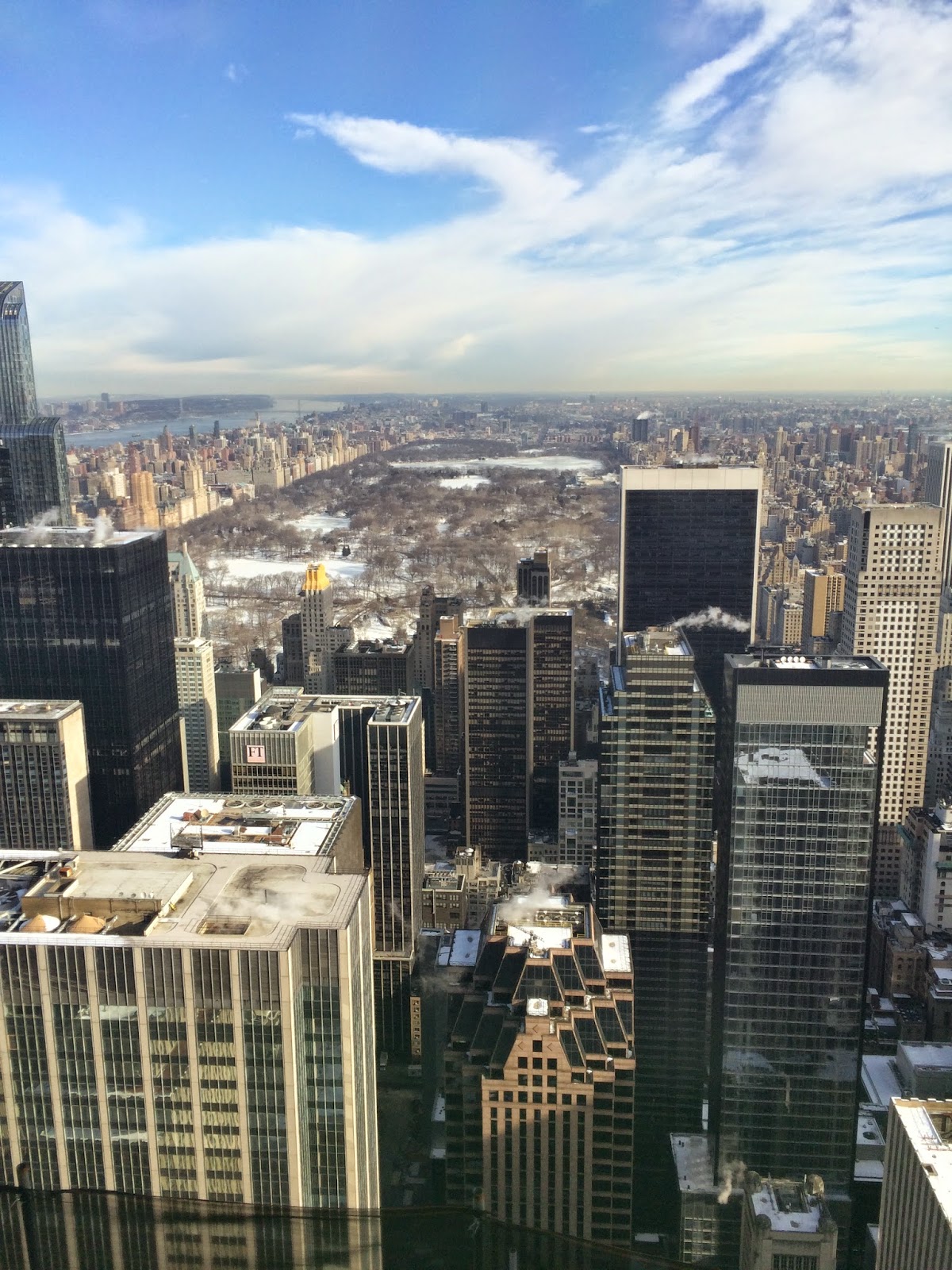 We went up to the Top of the Rock, something I'd never done. 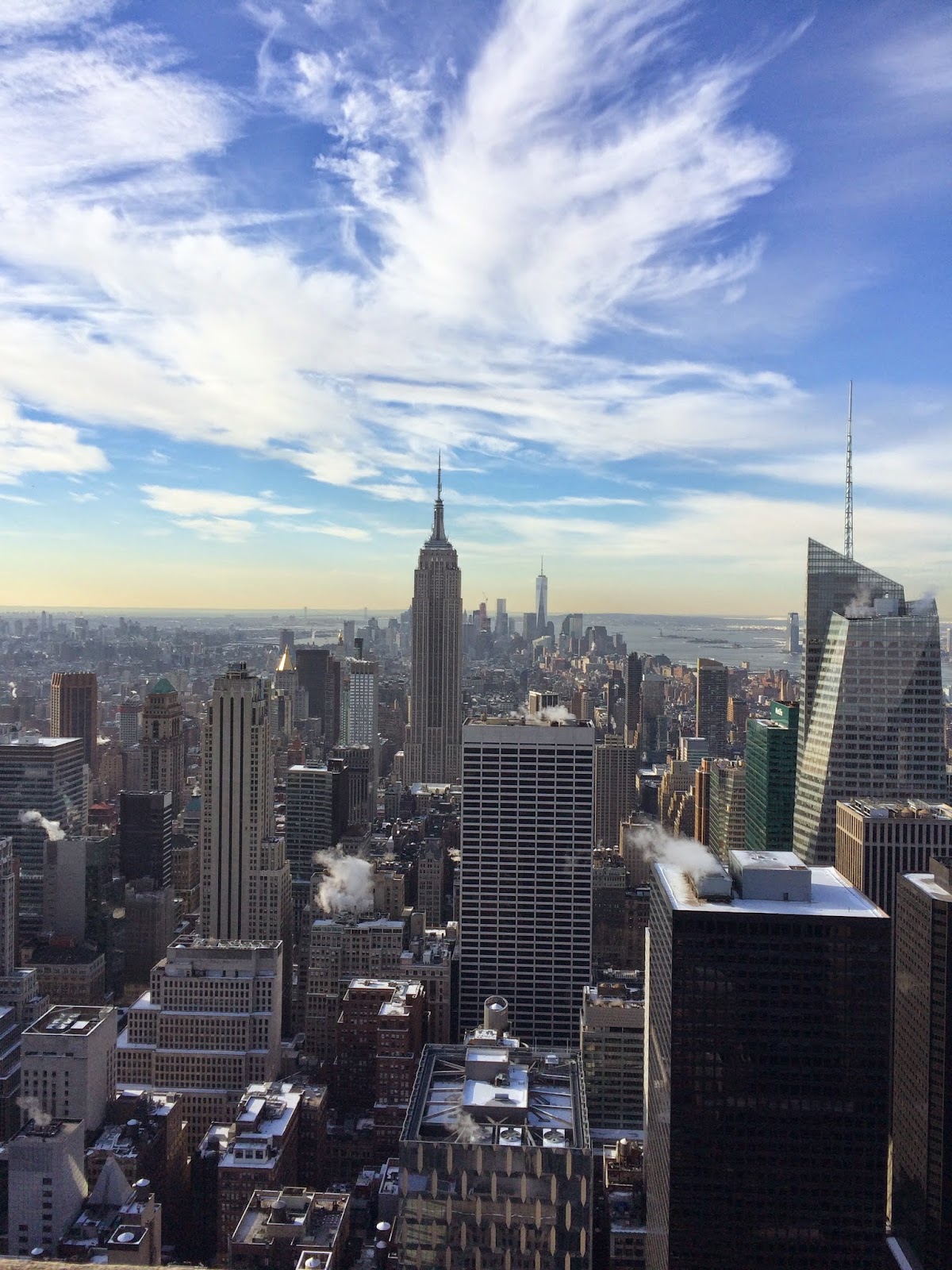 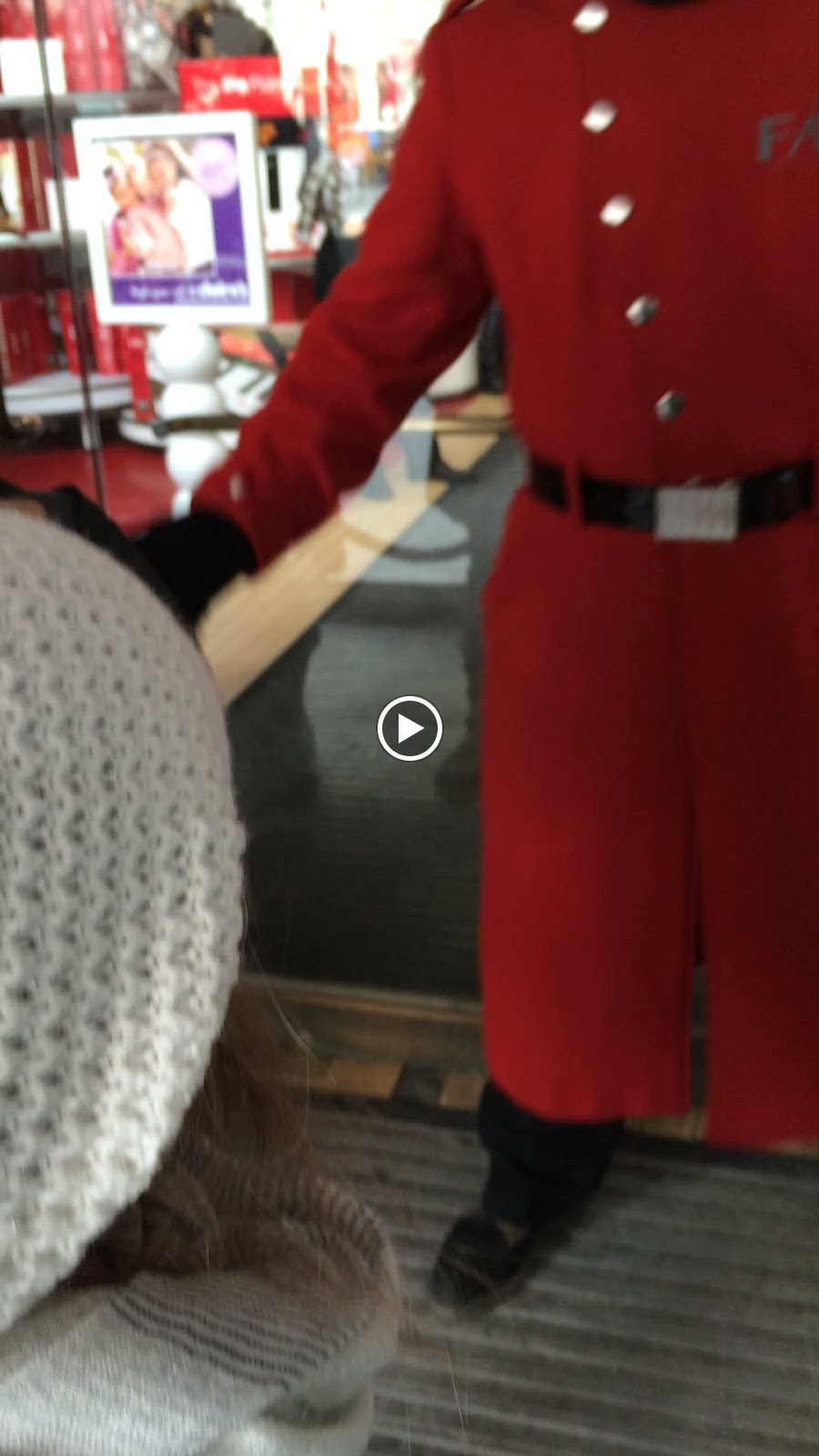 If you ever go to FAO Schwartz, you need to be there right when they open. That's what we had done last time, which Sis was too young to remember. The employees line up and cheer when you enter, which is very fun and cheerful. 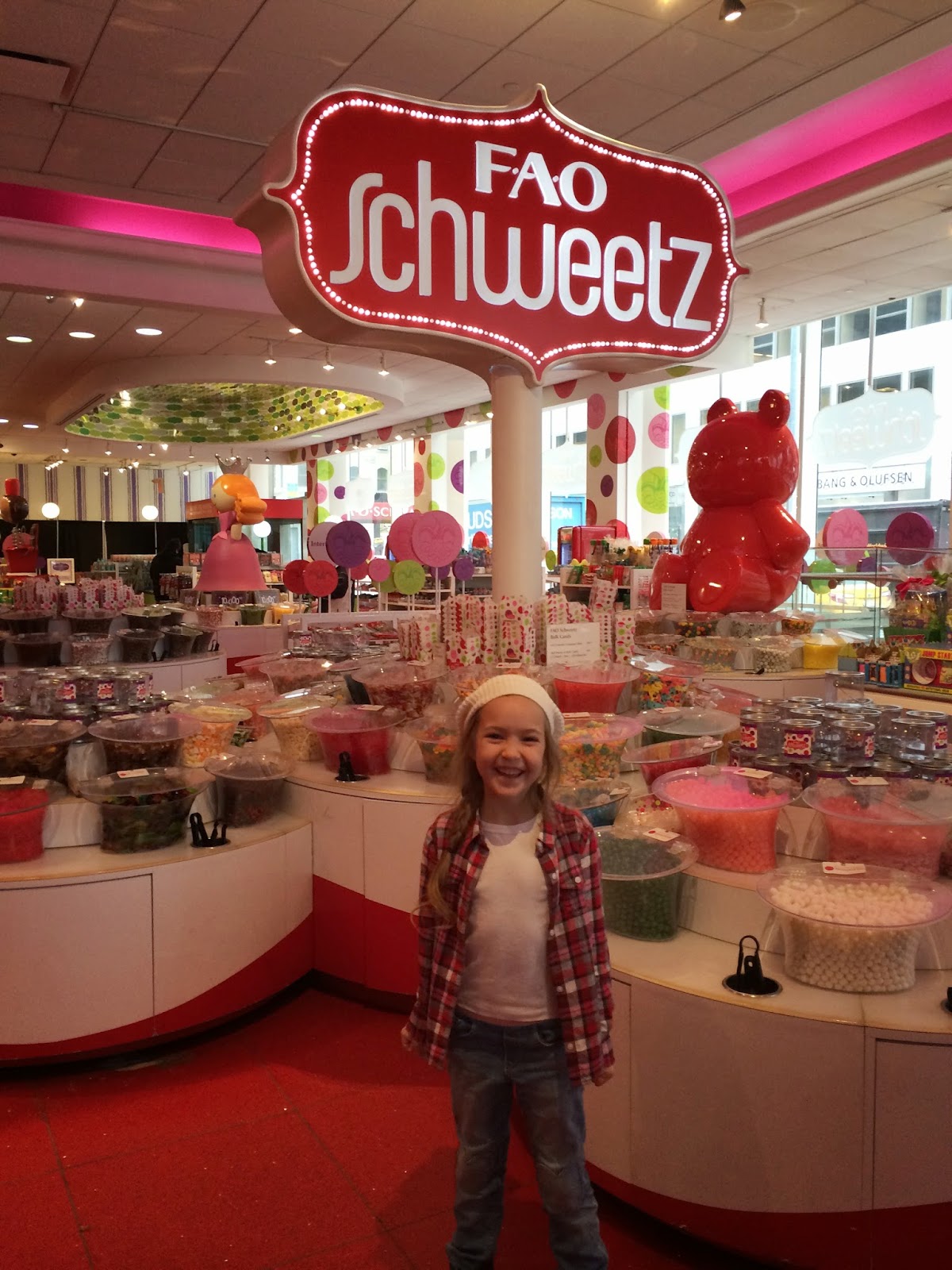 My sweet girl was in sweet heaven. I think she was more impressed with the candy than the toys... 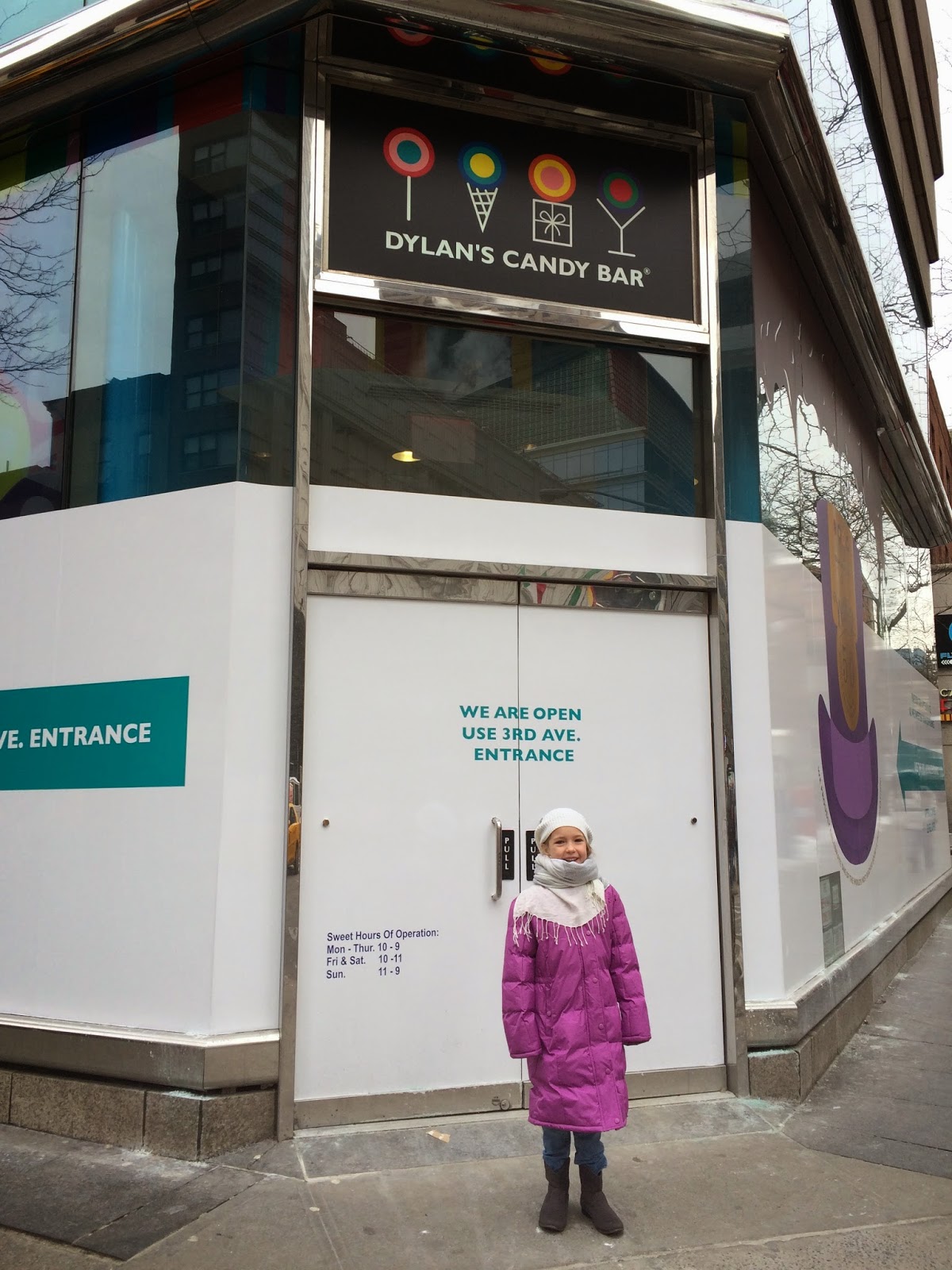 which inspired our next destination: Dylan's Candy Bar on the Upper East Side. 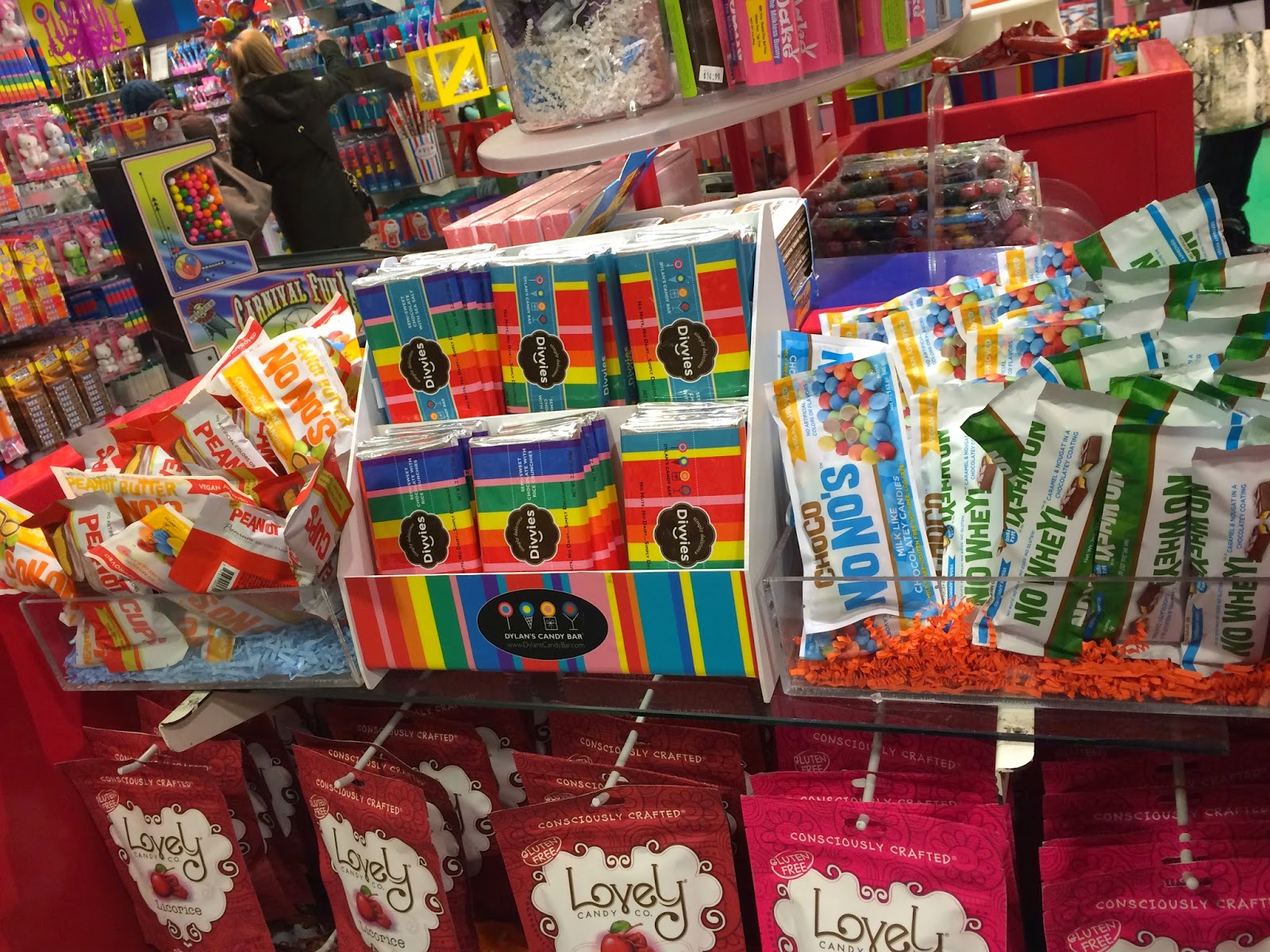 I had heard they had candy from Premium Chocolatiers, which we've enjoyed ordering before. It took awhile to find it because this place is so big. I even asked a couple of employees who didn't think they carried it. I actually had to call PC from Dylan's who confirmed it was definitely there, so I insisted to an employee we must find it. (It was in the allergy/specialty section.) We ended up spending way too much money on Peanot Cups, NoNo's, and No Whey bars, etc. 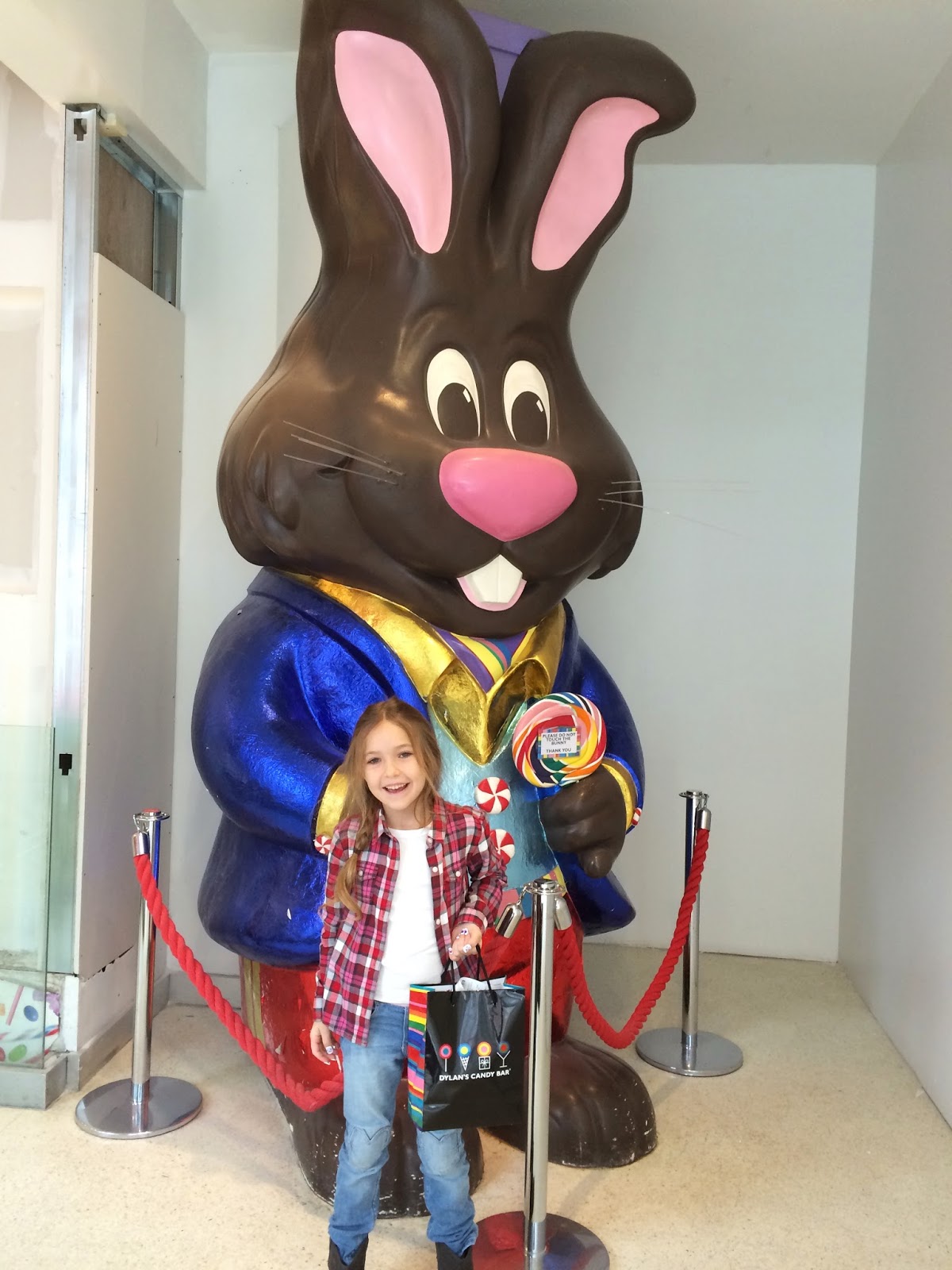 She also filled a bag with as much candy as we could deem "probably vegan" from the walls of scoopable candy. (My guess is she probably still has about 3/4 of this in her room. I think she loves the idea of candy more than she actually loves candy. Or it's that she wants to save it because if she eats it, it will be gone quicker. My boys would have eaten the whole bag by the next day but not her.) 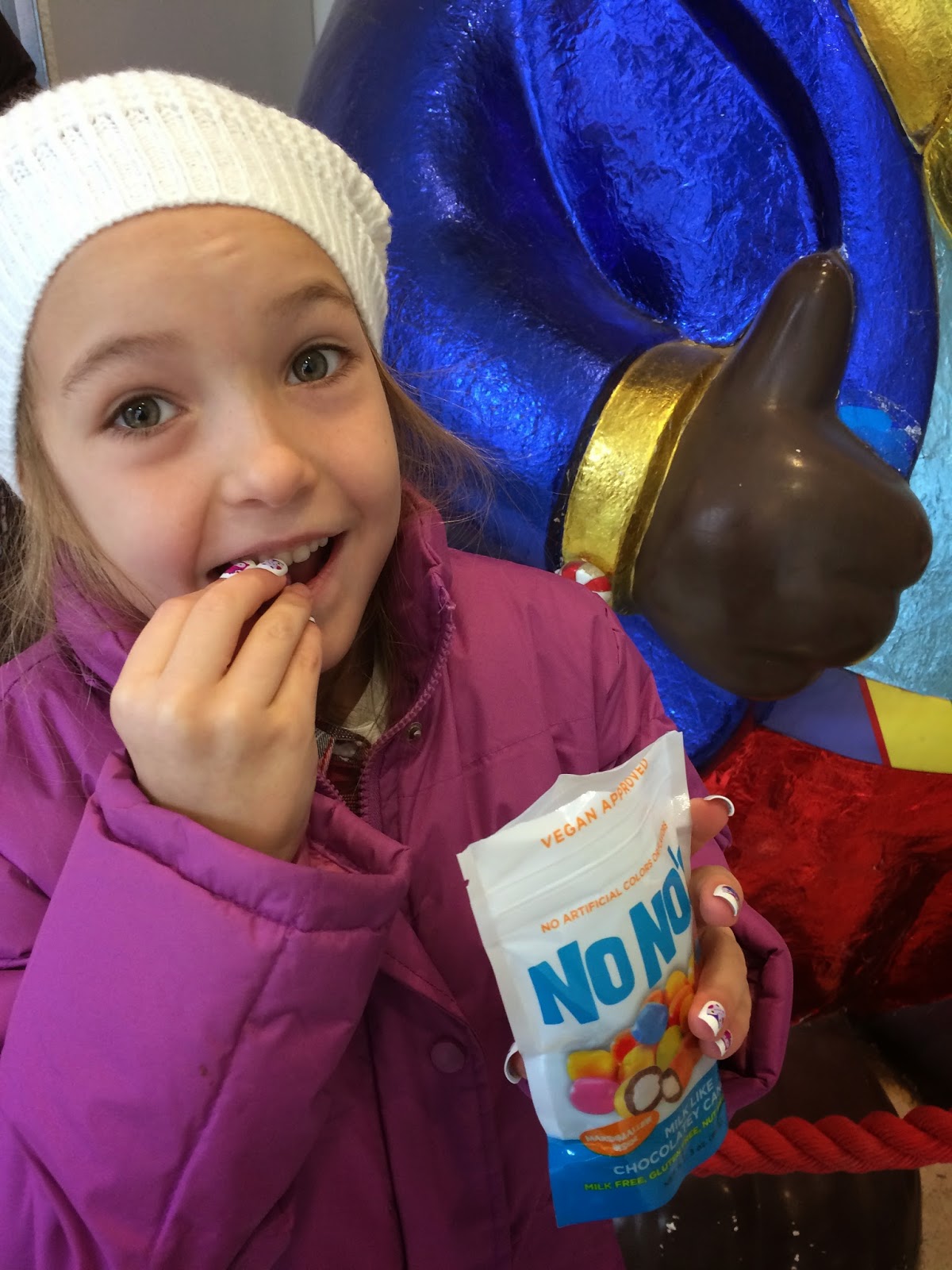 We really like the NoNo's. The company started making them with a marshmallow filling. But then they switched over to the chocolate filling, which the kids had tried at Christmas. I'm not a marshmallow person (like she totally is), but these were GOOD. Maybe even better than the new chocolate version, and I'm usually a chocolate purist.

Side note: there is no information on the website about whether the ingredients in their products are genetically modified/organic or fair trade, etc. I emailed the company and was told "they are not certified in either but try to comply with both." 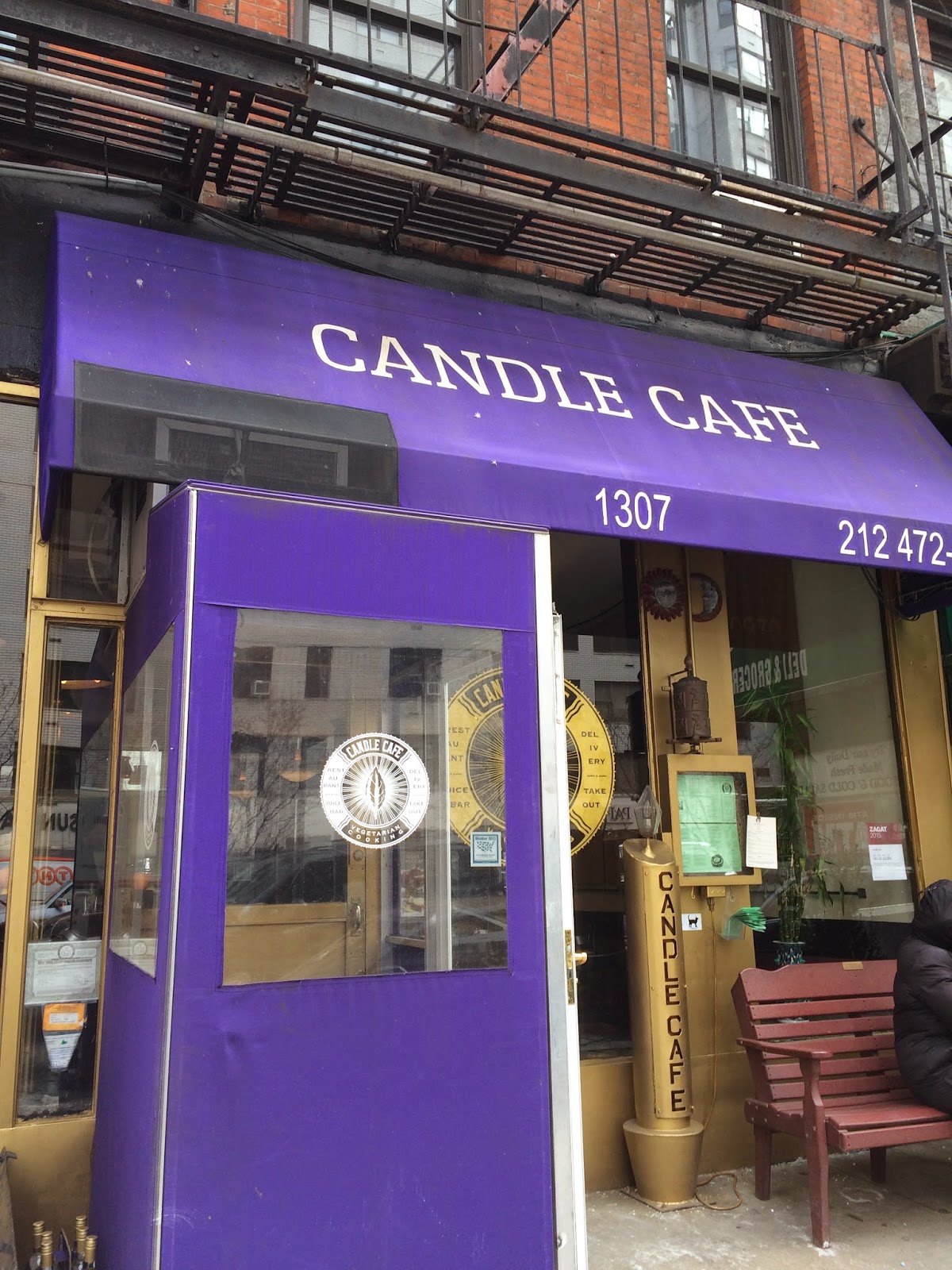 We continued walking up the street to my first love. 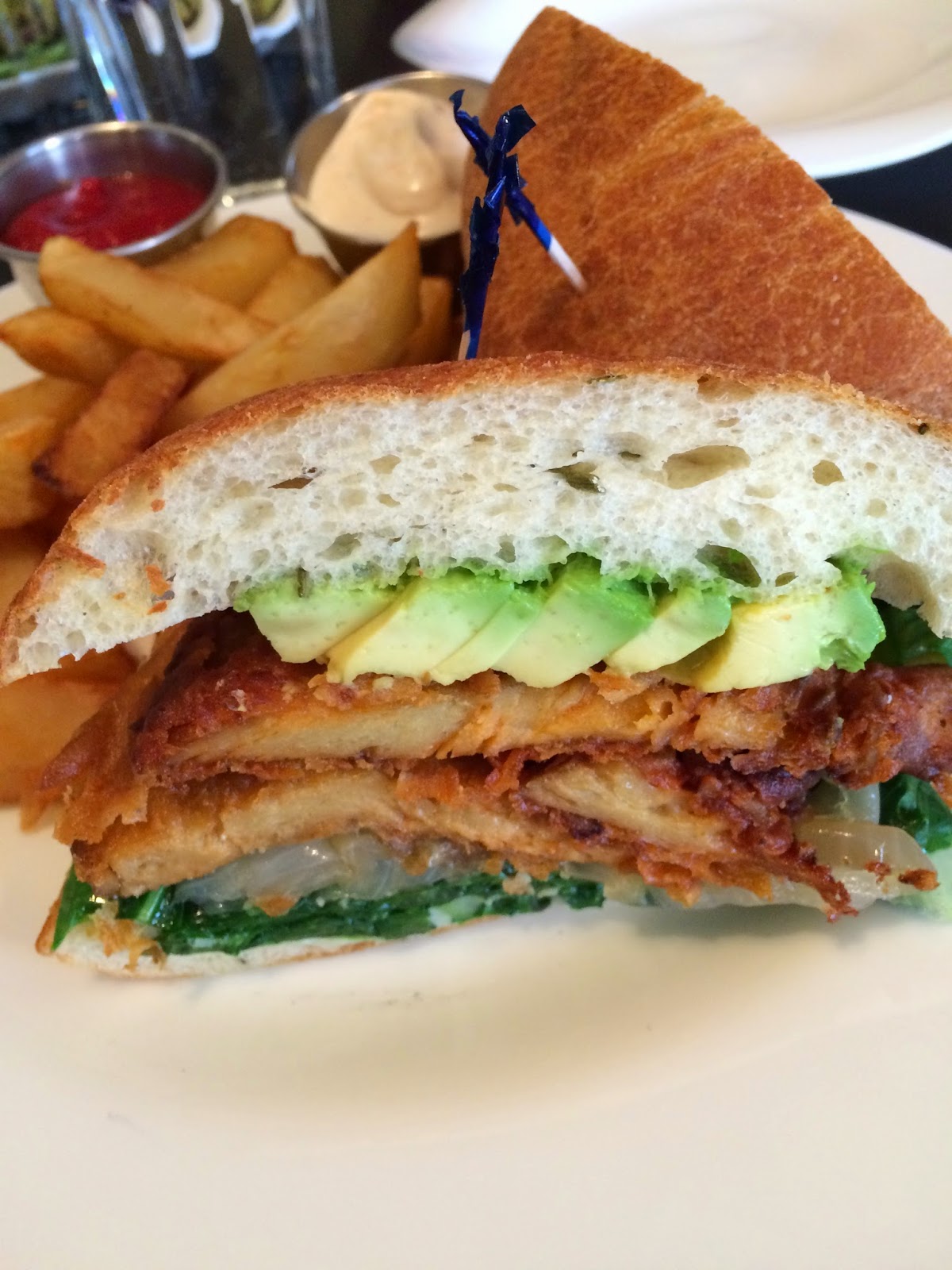 And I ordered one of my favorite foods of all time, the Cajun Seitan Sandwich. I was a little embarrassed when I looked back at how many pictures of these I have on my blog. And I've referred to it as a "utopian metaphor" between my husband and me. 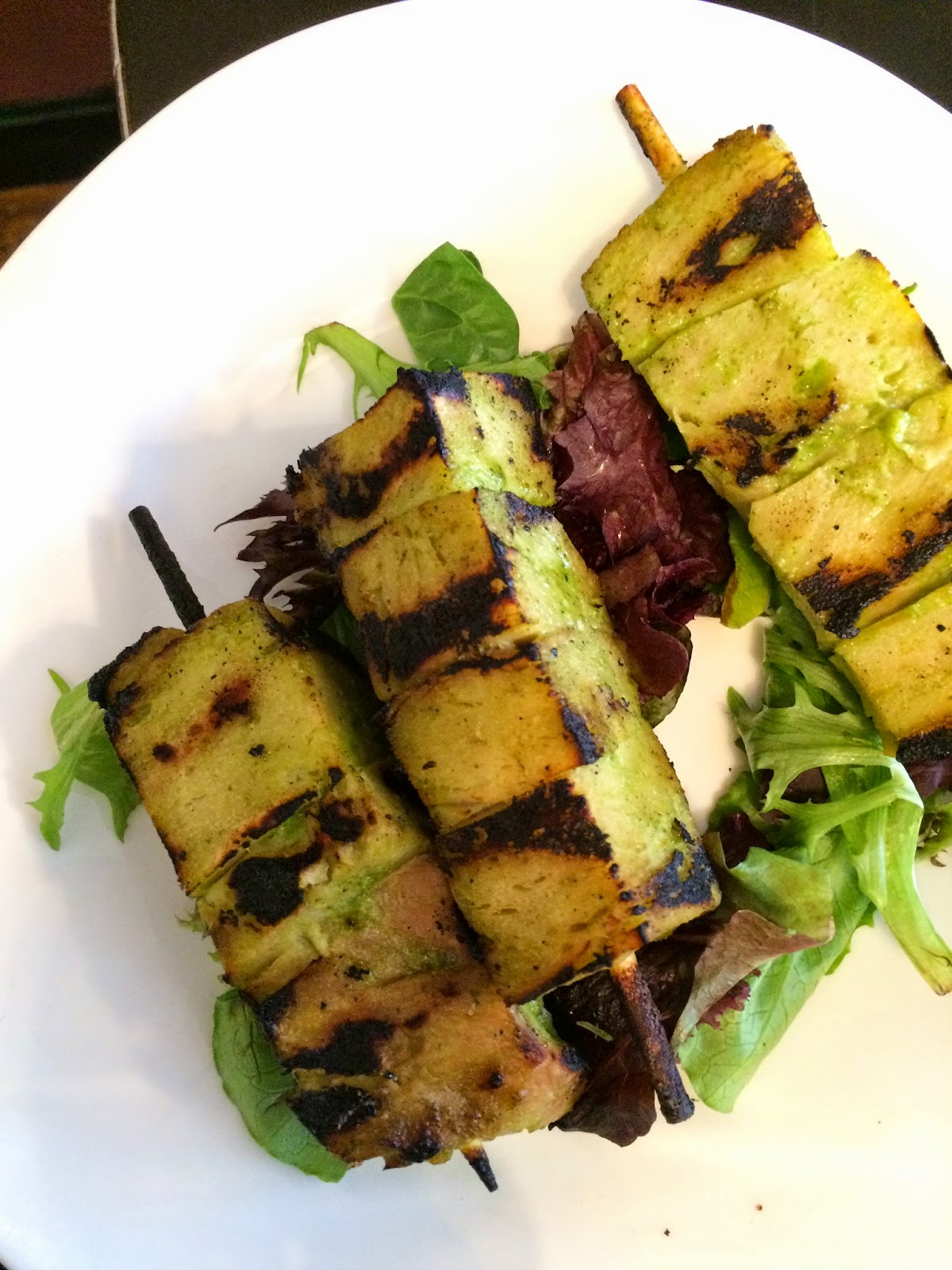 These have showed up a few times, too: citrus herb marinated seitan skewers. 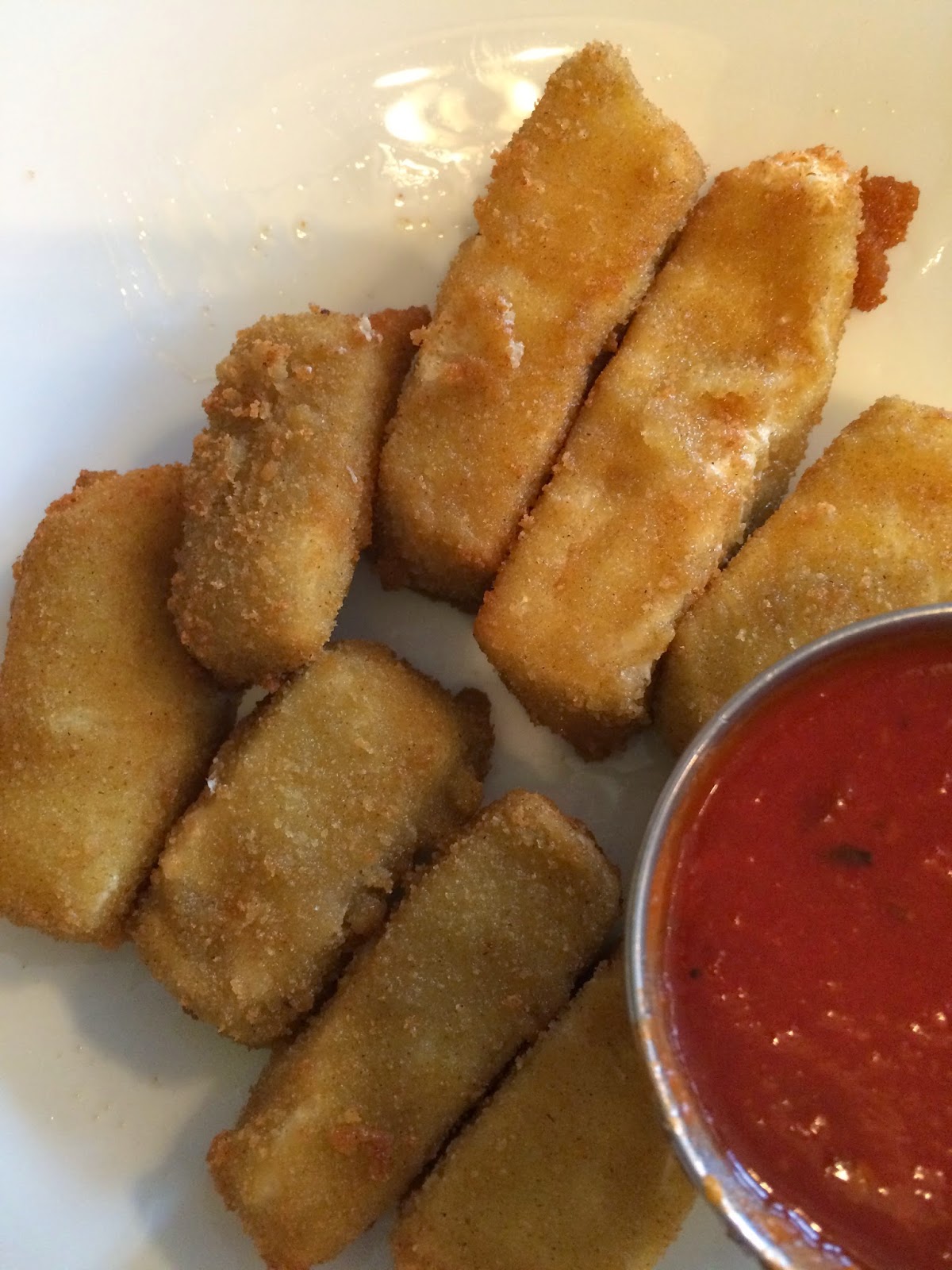 Sis got to enjoy cheese sticks for the second time this trip. So good.