There's no way I would have left NYC without heading to Williamsburg for DOUGHNUTS!!! 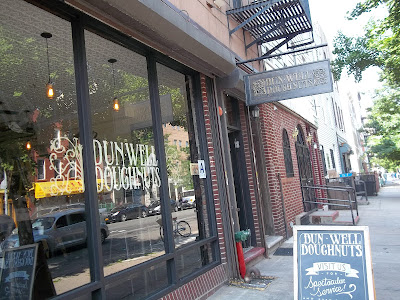 One thing I love about this place is the story behind it. Dan Dunbar and Christopher Hollowell (get it: DUN-bar and HolloWELL = DUNWELL) raised $15,000 to help open their store front. Watch this video for more about them. I'm just really into the idea of someone being inspired and brave enough to take on something like this. (I SO WANT to open a restaurant or business one day.) And then others rallying behind them in support!

Watch this video from their website. Before our trip (and after), I think my kids and I watched it no less than six times. We called Ryan in to watch it, too.

"Finally, the solution to all our problems..."

Anyway, I just thought it was fun advertisement. 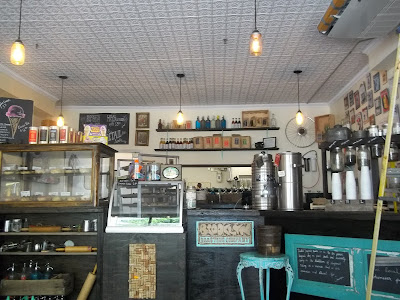 The store is really cute, somewhere I would want to hang out all of the time. It's really easy to find, as well. Just take the L to the Montrose Avenue stop, and it's RIGHT THERE.

It's too easy to get there. If you know what I mean. We were staying in Chelsea (my new favorite area to stay) right by the 23rd street subway entrance, so we were one stop away from the L. 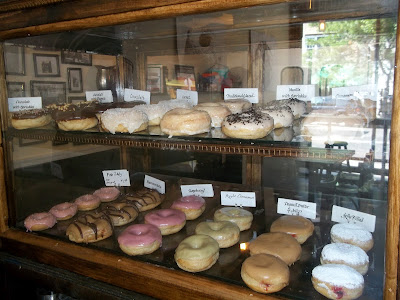 Each day, they rotate a variety from over 200 flavors. Check out all of the flavors. I'm talking Pecan Pie, Root Beer, Raspberry Pistachio, Maple Blueberry, Sliced Pear and Pumpkin Spice, etc. 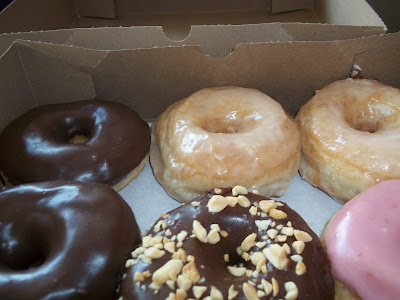 Since this was my first time, however, I stuck with my old-time favorites. Chocolate Covered, Chocolate and Peanut Covered, and Glazed. (And my son also chose Raspberry.) They use fresh, organic ingredients.

Although it's hard to go against Glazed (I mean, soooo good.), the Chocolate Peanut Covered will probably always be my favorite because it evokes a memory of being the first kid to get up on Sunday mornings. I was an early riser back then, so I got to ride to Casey's General Store with my dad for a newspaper and Chocolate Peanut Covered Long Johns. 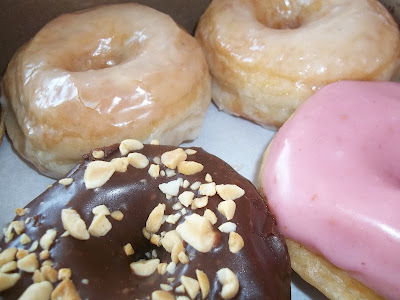 We only bought half a dozen on our first visit. I questioned Hollowell about how long the doughnuts would stay fresh. He suggested only a day or two. As my son and I were contemplating how many to order for our hotel room, the guy asked, "Is it just you two?"

"Oh, I would think half a dozen would be more than plenty."

Dang it. Now I had to choose between looking like the Vegan Dessert Pig that I am - or presenting myself normal and cool in front of this very cute, charming person. I agreed with him that 6 doughnuts would be plenty, we ate those 6 doughnuts within a few hours, headed back the next day hoping outfit and hairdo changes would throw him off...smiled at him when he commented that it was good to see us again...and scurried on our way with another DOZEN doughnuts to go.

You can even get a Doughnut Sundae!

I can tell you what I'm getting next time. 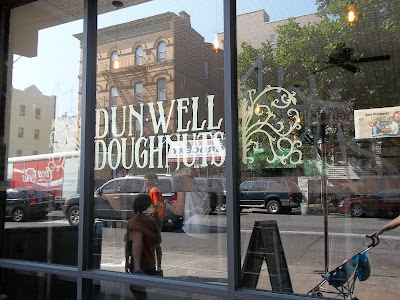 I mean...there are just those places that can merit a visit to a city all on their own. Dunwell Doughnuts is one of those places for us. I'd travel to NYC, pick up a dozen or two, then come right home. To Arkansas. I would.

And if that's not enough to convince you, Dunwell's were chosen by The New York Daily News as the city's best doughnuts. Of all the doughnuts, not just the vegan ones.

On our second visit, they had started serving Lavendar Lemonade, an excellent addition. I can't speak on the other drinks such as coffee, "egg" creams, Italian Soda, etc. I think they also had vegan candybars when we were there.