Where have I been?
I think I had the flu (fever, chills, achey, head cold). Which was preceded by my children all having it. And although the kids were feeling better by the time I got sick, it hit my husband and me at the same time. We'd both be in bed while the kids fended for themselves. Occasionally, one of us would stagger out of bed to break up a fight or refill a sippy cup, then stagger back into bed as quickly as possible. It was one of those illnesses in which I was too weak to even fast forward through my dvr'ed show's commercials. I just endured the commercials rather than muster the energy to lift my hand.
Mix three weeks of someone being sick with a big birthday party, lots of out of town company, and the rigors (and fun) of everyday life - and that's where I've been.
Back to blogging! 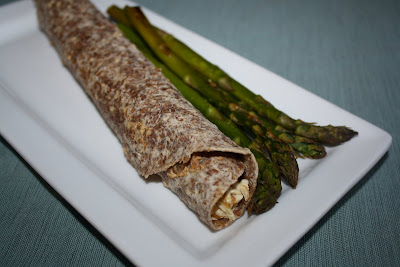 I borrowed Jessica Seinfeld's Deceptively Delicious from the library awhile back and have been enjoying trying out recipes from it. Although it isn't a vegan book, there is plenty to easily veganize. For those of you not familiar with the book, the concept is simply finding ways to sneak pureed fruits and veggies into your food.
And although my kids eat healthy enough that "sneaking veggies in" isn't necessary, I still find it fun and a challenge to do so. Above, I made the Tortilla Cigars with several changes. This is sort of what our Tortillas consisted of:
1 can pinto beans
1/2 cup yellow squash puree
1/2 cup carrot puree
sprinkling of Daiya
Yum! I spread the vegetable/bean puree onto Ezekiel Sprouted Tortillas with a little Daiya and rolled them up as tight as I could. I baked them for a bit (10 minutes? not sure) until they were browning and starting to crisp up a little. We couldn't get enough of these. I feel like there's no reason NOT to add veggie puree to my refried beans from now on. I didn't think it changed the taste much when it was all wrapped up. 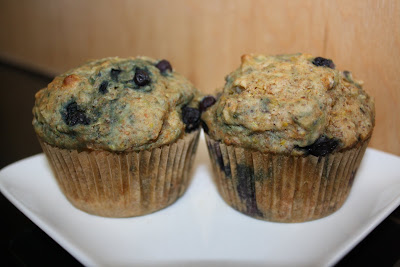 Next up were the Blueberry Lemon Muffins, which I adapted quite a bit from the original recipe, veganizing it and cutting out some of the sugar and oil.
This was another yellow squash puree recipe. I chose these two recipes mostly because squash happens to be one of the vegetables my youngest two aren't crazy about. I love that I have these ideas to get a little yellow squash into them. We devoured these in two sittings. I could never stretch my desserts out for a month, like Shen, even if I wanted to. 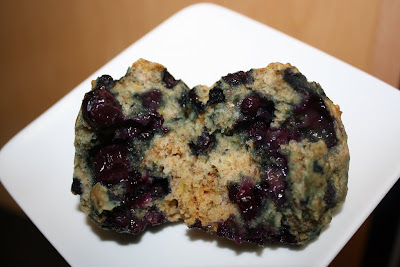 Blueberry Lemon Muffins
Preheat oven 350. I stirred together these ingredients:
1/4 cup turbinado
1 Tbs. Earth Balance
3 Tbs. applesauce
1 cup lemon soy yogurt
(which is a little more than one container)
Then I added these ingredients:
3/4 cup steamed yellow squash puree
egg replacer equivalent to one egg
1 teaspoon lemon flavor
1 cup all purpose flour
1 cup whole wheat flour
1/4 cup ground flaxseeds
1 tsp. baking soda
1 tsp. baking powder
1/2 teaspoon salt
The original recipe says to not overmix. Last, I stirred in:
1 cup frozen blueberries
Divide batter among muffin cups. (For me, this was equivalent to one 12-cup baking tin plus 2 extra silicone cups. Bake until muffins are lightly browned, about 13-16 minutes.
Next up on my list to try: Mozzarella Sticks with cauliflower puree!
Posted by Jenny at 1:12 PM