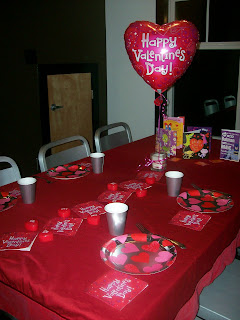 our table Tornado and I decorated; all of our wonderful Valentine's Day cards on display
This has been a very long week. I felt close to breaking down at times. Yesterday, a wailing sort of sound actually escaped from my mouth at one point. I felt like I could just fall into a heap on the floor and cry and wail. I didn't. Just sayin' I could have.

Ryan has had to work late every night for two weeks, at least. Dash became sick around Tuesday, and he's just getting over it. I slept with him, in his twin bed, three nights in a row. I think I woke up every hour. He threw up for a couple of days, and I was certain that stomach bug was going to infect us all. However, I took him to the doctor on Thursday, and he was diagnosed with a throat viral infection.

Add in a few other appointments and errands I had to take care of this week...this morning, there were not many clean dishes left in the house. There was barely an inch of counter space left uncovered. If you've seen my house, you know there's a LOT of counter space. (Ryan and I worked together on the house this morning and made a pretty good dent.)

I'm not really sure what happened this week (and, oh yeah, for three days, I have had a terrible crick in my neck and back; I've been walking all hunched over and doing the whole body turn)...I say all of that to say: IT WAS TIME TO PARTY. 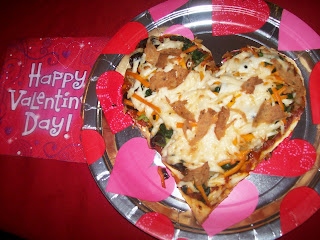 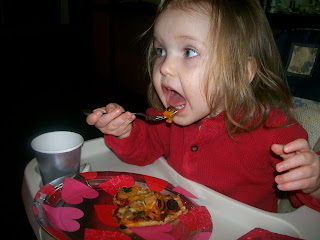 That's Sissy telling me that it was hot. She was LOVIN' the raspberry lemon-aid. 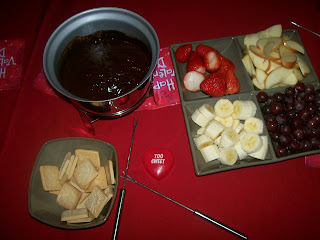 Grandma saved the day. I hadn't even had time to think about any special activities for the day. She had mailed us all of the red heart containers that are sitting on the table above. Inside each container was a joke written on a tiny strip of paper. The answer was written on another tiny piece of paper inside. We opened them up and read them throughout our meal. The kids loved it! Thanks, Grandma!